Yes, I was at the rugby: 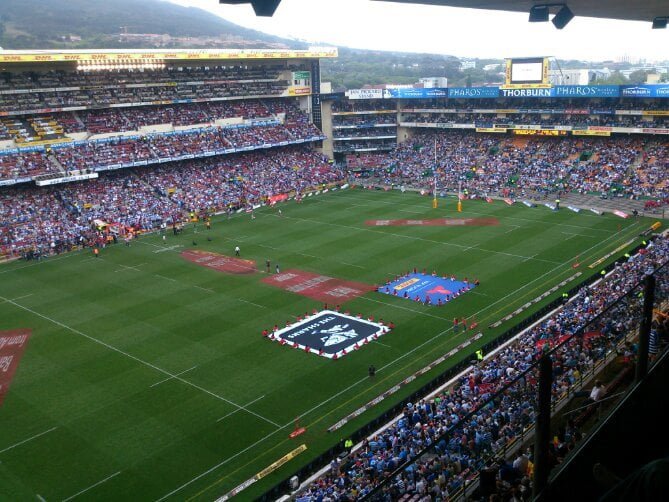 No, Province weren’t very good (and neither were the Sharks).
Yes, I was glad that I had Sheffield United’s victory (and a nice draught Milk Stout) to make me happy.

It seems that Saturday’s rugby game may have been the final nail in the coffin for Newlands – traditional home of the Western Province Rugby Union. Previously, the Union had steadfastly refused to consider any move from the Newlands ground to the new stadium. However, popular South African rugby website keo.co.za thinks the friendly game at the new Cape Town Stadium may have forced their hand:

It was impossible for the 40 000 people who attended the pre-season game not to draw comparisons between the new stadium and WP’s home ground on the other side of Table Mountain. Quite simply, the one is modern, light and uplifting, while the other is old-fashioned, dark and depressing.

There is no reason for the rugby not to move from Newlands save for tradition. As has been remarked upon in the comments on this post, change is never easy to accept – especially where such a long and proud history exists – but there are very few occasions when clubs move to new grounds and stadiums and management and fans look back and are unhappy with their new home.

Newlands is inevitably going to suffer the same fate as those other rugby relics, and it’s time WP administrators accept this. They need to start preparing for the future, and the future of WP rugby – whether they like it or not – is in Green Point.

The Stadium would also benefit from the move and has already demonstrated that it can comfortably handle a big rugby occasion.
Having the Stormers and Western Province as an anchor tenant would be a huge bonus. The Stormers could fill the stadium for many of their Super14 fixtures and it would inevitably attract other large rugby events such as international matches.
Meanwhile, the Newlands Stadium site would be of huge commercial value as real estate.

All it takes is the courage to make the move.