Three health related things for you to know about:

Firstly: Dead reindeer!
You know that awkward feeling when you thought that chronic wasting disease (CWD) was restricted to deer, elk (Cervus canadensis) and moose (Alces alces) in North America and South Korea, but then researchers announce that the disease has been discovered in a free-ranging reindeer (Rangifer tarandus tarandus) in Norway.
Yeah. Exactly. Bad news for free-ranging reindeer in Norway. Glad I’m not going there any time soon.

It is a mystery how this disease arrived on a mountaintop in Norway. Researchers think it unlikely that it was it imported. They suspect that it might have arisen spontaneously, or jumped the species barrier from a prion disease in sheep called scrapie, although such a jump has never been seen before.

Now that it’s there though, history has shown us that it will be hugely difficult to eradicate.
Not great.

Secondly: A comeback!
Scarlet fever struck fear in the hearts of Victorian-era Americans and Europeans. In the late 19th century, it was a leading cause of death in children—killing as many as a third of those who caught the infection.
Not great.
Then suddenly, <sparkly lights>antibiotics!</sparkly lights> and we humans were saved as the Streptococcus spp. succumbed to Alexander Fleming’s penicillin. But now…

And no-one knows why. There is no vaccine for Scarlet Fever, so it’s not foolishly impressionable parents making poor decisions based on dodgy “science”. It’s as much a conundrum as CWD in free-ranging reindeer in Norway.
(That’s my new goto metaphor for mysteries now.)

Thirdly: Talking of crimson!
Science, as an entity, was 0-2 down in this post so far, but there’s hope of a late comeback as we snatch a point against the run of play in the treatment of red scrotum syndrome. I’m no expert on this particular condition, but – if pushed – I think I could come up with a guess at both the area affected and the signs and symptoms on said area.
Not great.

Serendipity with the assist on that one, it seems. But either way, I’m sure that anyone suffering with red scrotum syndrome will be relieved to learn that a potential cure has been discovered – by whatever means. 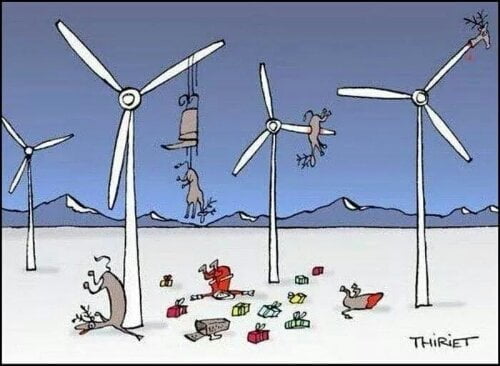 We all thought that killing our birdlife was bad enough, but apparently the local wind turbines have other targets at Christmas time.
Caledon is likely to be strewn with reindeer parts tonight. Great for biltong.

And while we don’t all believe in the story of babies in mangers and gift-giving shepherds, whatever you’re doing over the next few days, I hope it’s enjoyable and relaxing.

(Thanks Tina for the image)