Just some thoughts about the last 24 hours. Not drum to bang, no product to sell, just a few things I have noticed and that I’m going to write down now. You can learn a lot about people by watching their public reactions to this sort of news.

I recognise that not everyone likes a royal family, and I recognise that Prince Philip may sometimes have been a divisive figure, but some of the comments on social media – particularly those making it all about the individual posting – are both appalling and superb.

It’s true that this is a bit of a new thing for the BBC. No-one as nationally important (I’m talking about his standing in his traditional and ceremonial role, not what you think his rank in society should be) has died since 1952. Things have moved on since then. A lot.

“Timings not great for this”? Yeah. How irritating of him to die now. I’ll have words. Not to worry though, we’ll be sure to get the next public figure to pop their clogs at a suitable time for you, Cazza. Do you have anything free in October next year, for example? “Unbelievable really” actually does sum it up nicely. But your comment rather than his poorly timed demise.

And then this: There are hundreds of thousands of hours of BBC content on radio, TV and the internet every single year. But literally a couple of hours of news about the Duke of Edinburgh dying and John’s wondering where his money is going, the tight-fisted sod.

Other radio stations and streaming services are readily available, and I’m sure that John knows that, but just quietly switching over doesn’t get him the attention he requires. We need to be told about it. He is quite clearly nuts.

Nail on the proverbial. This is exactly what it’s like in North Korea. You moaning on social media (despite the fact that speech is forbidden) from PyongYang just like all North Koreans are always doing. Mark Radcliffe playing Aqualung, Zero 7 and Sigur Ros over the airwaves whilst the much beloved leader of the country oversees mass military demonstrations of thousands of conscripted soldiers all marching in perfect unison. Public executions of dissidents. Half the population starving, the other half in concentration camps. Regular botched nuclear missile tests.

But it’s not all doom and gloom. There are some really amusing memories of Prince Philip as well. He seems to have been a fairly jovial character a lot of the time. See this from Private Eye:

Look, I need to get the braai lit, so I’m going to leave this whole thing with one final thought, which has been the one dominating my mind since I heard this news.

Photo story (it’s not the one you keep reading).

They were married for over 73 years. That’s absolutely incredible. I’m approaching n years old and my Dad was only a toddler when they tied the knot. The Queen has reigned for almost 70 years and he was by her side every single day of that. I fully realise that theirs is not a normal life by any stretch of the imagination, but to lose someone who has been your partner for that long must be impossible to bear.

I think a lot of people – especially those rushing to whine or fling insults around on social media – forget that there’s a human side to this as well. They’d do well to take a step back and think again.

A million or more people have asked if I knew that Meghan Markle owns a beagle, and that said beagle was on the guest list for the Royal Wedding over the weekend.

In addition, plenty of those people told me that the beagle in question (it’s called Guy, by the way) shared a lift to said wedding in a chauffeur-driven, bulletproof Range Rover with the Queen. 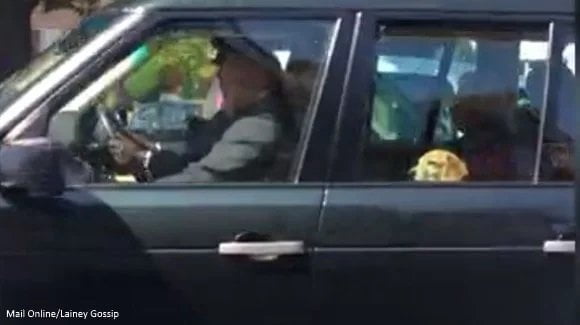 There is no way that Colin must ever see this image.

I draw the line way, way above curtseying each time I serve a bowlful of kibble.