I said that I was going to try to use less plastic this year. But that doesn’t mean that I’ll be able to stop using plastic altogether. Don’t be daft. Plastic is ubiquitous.
Where I can then, I’ll make appropriate and sensible choices, but it’s inevitable that I will still use some plastic.

We’ve been recycling our plastic, glass and paper waste for several years already, but now I’ve come across another way to recycle our plastic waste.

What are Ecobricks?
Ecobricks are low cost, thermally insulating bricks that are made by simply compressing unrecyclable plastic into 2L bottles.
Why we’re in love with them
Making ecobricks is a way to save the environment whilst supporting a needy community from the comfort of your kitchen counter.
What do we do with Ecobricks?
Affordable housing for you and me
Raised beds for our gardens
Benches for parks and gardens
Boundary walls
Temporary exhibition structures

And it really is as easy as poking plastic packaging into a 2 litre Coke bottle (make sure you drink the Coke before you start poking) (messy otherwise). 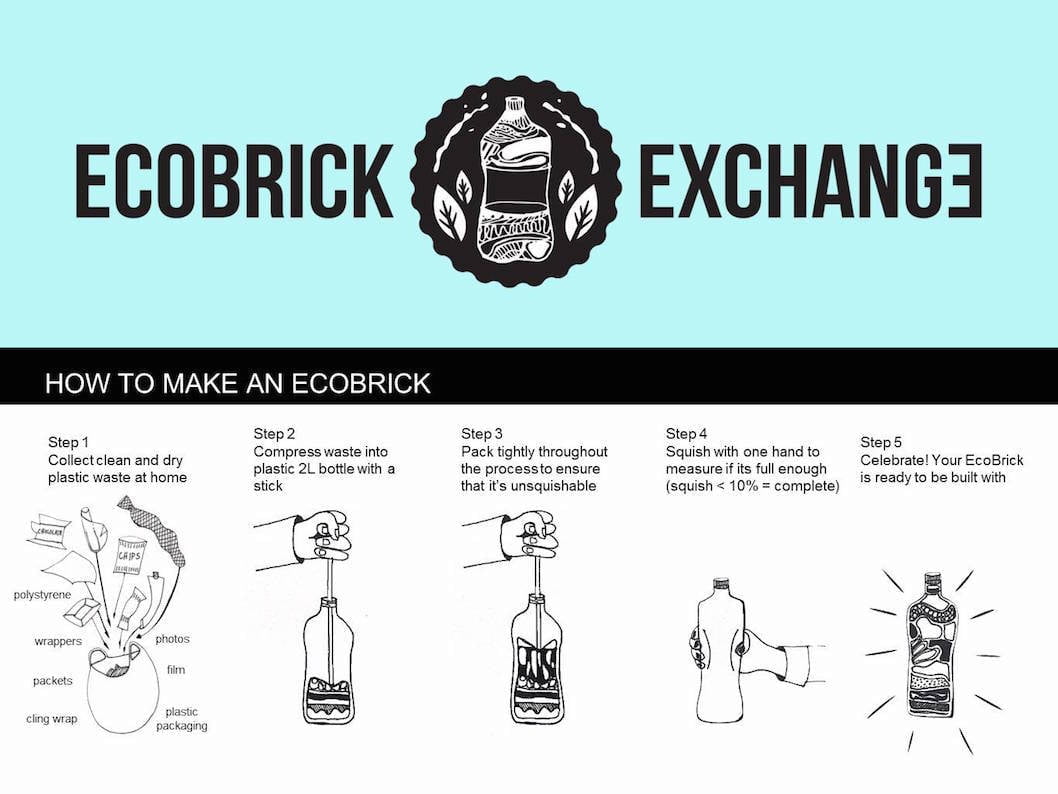 It’s easy, fun and actually quite addictive. You’ll be amazed how much plastic disappears into one of these bottles once you squish it in a bit. It’s like an inverse Magic Porridge Pot – there always seems to be space for more.

And once you’ve made a few, you simply drop them off at one of the Ecobrick Exchange handy hippie drop off points in Cape Town, Johannesbeagle, Pretoria or Port Elizabeth: 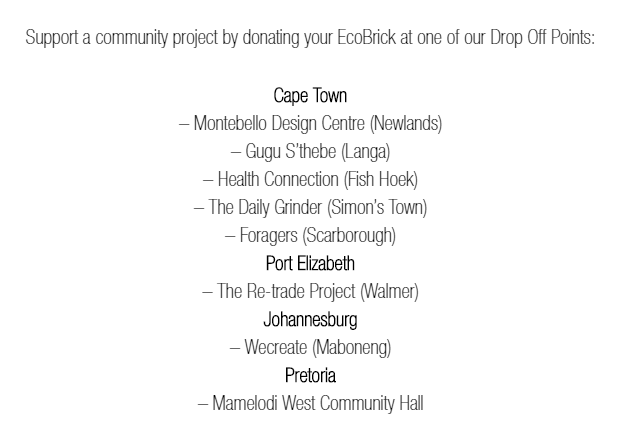 Or you can build something yourself.

It’s a great, safe, fun and simple way to involve the kids in recycling, and you’re actually doing something good with all that nasty plastic.

OK. Difficult one here. Difficult because I’m a big fan of the local Aquarium and virtually everything that they stand for, but I find myself disagreeing with them on this issue. A bit, anyway.

Firstly, let me tell you that I’m a member of the Aquarium, as are my kids. We have been for several (or more) years. We go there often, we love their behind the scenes tours, we were excited about their revamp, we take them turtles (well, a turtle) and we’re very supportive of their work.

Yesterday, the Aquarium published a blog post on their views about the new Stikeez promotion at local retailing behemoth PicknPay. For those unaware of what a Stikeez is, it’s a small plastic toy with a sucker on the bottom, one of which you are given with every R150 you spend at the supermarket. This is the second Stikeez promotion that PicknPay have launched. The first one was… well… a spectacular success.

But the Aquarium are unhappy about this new promotion, simply because it flies in the face of their understandable and commendable stance on plastics – namely that there’s too much in the ocean already. Their view has been brought even more sharply into focus by the fact that this lot of toys have an “under the sea” theme.

So, let me set my stall out here. Yes, I agree that there is too much plastic in the ocean, and yes, I agree that this is a bad thing. My family are doing their bit to help out here. We recycle all our plastic, we use refills rather than new bottles for washing up liquid, deodorant, shower gel, window cleaner and fabric conditioner, and we all routinely reject plastic straws at restaurants, much to the bemusement of waiting staff across the Western Cape.

But – and here’s the crux of my argument on this one – those things I listed above are single-use plastics. And I don’t agree that Stikeez fall into this category – our kids still have theirs from last year.
Looking at the Aquarium post, I’m not sure they are 100% on it either:

You could argue that additional introduction of any plastic is bad, and you’d probably be heading along the right lines. But you can’t just stop using plastic. It’s simply not possible – it’s an essential material in our lives whether we like it or not. And if we’re going to say no to Stikeez on the grounds that they are “essentially single-use”, why are we content to say yes to sweet wrappers, cling-wrapped produce, bread tags and the like?
And if you want to take the argument further and say that it doesn’t matter whether they are single-use or not, then presumably Crocs, Bic ball-point pens and toothbrushes are next on your hit list?
(Seriouslythough: if you actually have a hitlist and Crocs are next on it, well done.)

It’s that sort of inconsistency and s-t-r-e-t-c-h that doesn’t sit easily with me. The previous Stikeez campaign was attacked simply because people wanted to be seen attacking it. It became silly: people complained about the wrappers on the floor, and yes, littering is bad, but that’s not a Stikeez issue, that’s a teaching your kids general respect and responsibility issue.

And then remember all that drama over another supermarket promotion a few months back? The one that was blamed for starvation, unemployment, drought and inflation – before this pièce de résistance:

Maybe, a child might actually mistake it for food and try eat it and accidentally choke and die?
Shame on you.

I’m not saying that the Aquarium are going down Hyperbole Street, although I don’t doubt that some people will take things that way. But that’s not an Aquarium issue, that’s a people are just complete cockwombles issue.
There are already one or two on the Aquarium FB page:

I’ll share your post, and I’ll consider boycotting the store (of course you will) but your spoor continues to disgust me.

Of course you do, you Rainbow Warrior. You only buy half your groceries there and then you get into your fossil fuel powered, greenhouse gas belching car and drive somewhere else to buy the rest. Well done on taking a stand, making a difference and showing PicknPay who’s boss.

So will PicknPay pull Stikeez II? I very much doubt it, although it wouldn’t surprise me if this was to be last Stikeez campaign they run. In that way, maybe the Aquarium wins this one.
Well done. Next stop, Lego? (he said, facetiously).

Look, I understand the Aquarium point of view and I understand why they feel they have to pass comment on this. Do we need more ‘unnecessary’ plastic? No, we don’t. And is this a good opportunity to educate people and perhaps lever their behaviour? Yes, it is.
But are Stikeez really to blame for the world’s (and the oceans’) woes? No.
No, they’re not. They’re just toys and because of that, I’m not even sure that they are symptomatic of those problems.

There are far bigger genuine single-use plastic fish to fry (pun intended) and it would be a bit of an own goal if we got distracted by apparently low-hanging fruit like this.