French Farmers are at it again. Only bettered in the violent protest stakes by South African Students and Turkish Taxi drivers (I just made that last one up for alliterative purposes really), they’re not happy about the alleged “unfair competition” from their Spanish counterparts over the Pyrenees.

And they are protesting by hijacking tankers full of imported Spanish vino, before doing… well, before doing this:

Sensitive viewers may want to look away now. 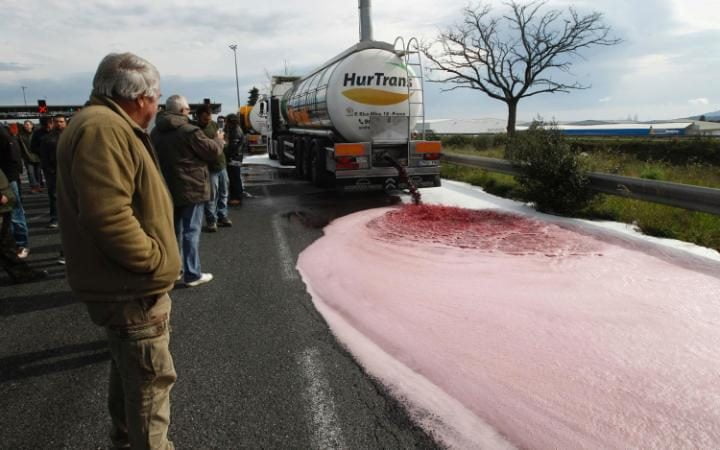 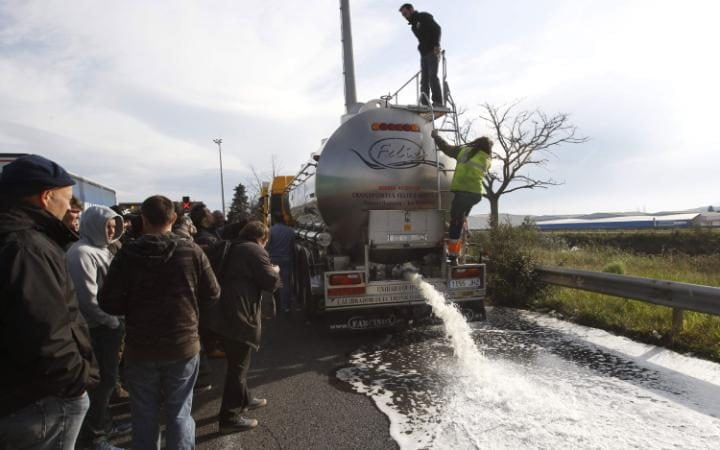 Ninety Thousand Bottles Full…. Ninety Thousand! That would have made for an awesome weekend…
Sweet jesus – will somebody please think of the children?

They’re annoyed that the regulations governing the Spanish winemakers from just over the border apparently aren’t as strict as those imposed on the local Frenchies.

“If a French wine maker produced wine with Spanish rules, he simply wouldn’t be able to sell it,” said Frédéric Rouanet, the president of the Aude winemakers’ union. “Europe’s all very well, but with the same rules for all.”

Sounds very much like the Namibian Sand Protests of 1997.
And the governments in question had better watch out, because first off, there’s history here:

Wine makers in southwestern France are notoriously hot-blooded and even have a shadowy “armed wing” called le Crav – the Comité Régional d’Action Viticole –  that has conducted various commando operations over the years [including terrifyingly recently], even laying explosives at “enemy” wine distributors it feels are not supporting local produce.

Outrage over such fraud led to the region’s first and most deadly wine riots in 1907, when hundreds of thousands took to the streets in Narbonne, and six people were killed when the army opened fire on the protesters.

And second off, this is just the start of their planned action:

Rouanet said the tanker hijack was “just the beginning” unless their demands were met, threatening action in the nearby port of Sète against the import of Italian wines.

“We will continue until we’ve proved that the illegal traffic of wine is going on. We are going to protect our consumers. You can trace our wine from the vineyards to the bottle and those same rules should apply to all.”

Because Italian winemakers are seemingly up to the same sort of dirty tricks as their Iberian counterparts.
And, while the French guys’ actions may be horribly depressing to watch, if what he says is true, then you can kind of understand the anger and frustration.

Still though… No. Just no. There must be some other way.

No-one likes Max Clifford. Employing him is almost an admission of desperation. And yet he still does what he does and he still makes money. His latest client is Shrien Dewani (he seems like a genuinely nice guy) – the husband of the bride who was killed in unusual circumstances in Cape Town while on honeymoon. Now Mr Dewani finds himself as prime suspect in the murder investigation and his hiring of Clifford hasn’t gone unnoticed by Ben Trovato, who writes the publicist an open letter in today’s Sunday Times:

As you said, the whole business stinks of a set-up. It is clearly a conspiracy between the South African government, the police, the prosecutors, the taxi driver, the killers and everyone who lives within 5km of the murder scene. I knew he was innocent the moment he hired you and a lawyer before he was even named as a suspect.

Your unremitting passion for justice has not gone unnoticed. This week, I was asked to find out if you would be interested in representing a gentleman from Uganda. His name is Joseph Kony and he heads a youth group called the Lord’s Resistance Army.
Mr Kony has been wrongfully accused of kidnapping, enslavement, murder, rape and the odd bit of pillaging over a period of 20 years. This is an absolute travesty. He is the nicest person you could hope to meet, a committed Christian who loves horses and long walks on the beach.

It would be a simple matter for a man of your talents to convince the world that the Lord’s Resistance Army is on a mission to spread goodwill throughout central Africa and would never dream of using blunt machetes to hack women and children to death.

I should point out that the International Criminal Court has issued an arrest warrant for Mr Kony. He has been indicted on crimes against humanity which, I am sure you will agree, is a crime against humanity in itself.

You can see what is happening here. The ICC is in the pay of powerful Africanists who hope that by getting Mr Kony to face these trumped-up charges, attention will be diverted from the fact that Africa is a complete basket case and this will be good for tourism and investment. Or something. Feel free to come up with a more plausible explanation.

Should you be reluctant to take on Mr Kony as a client, please be assured that he is a very wealthy man. God has rewarded him for his good deeds. The moment you receive payment, you will have a clearer grasp of the facts.
When you speak to the media, point out that these false accusations have hurt Mr Kony deeply. He is receiving trauma counselling at an undisclosed location in a Congolese forest and will be too upset to appear at any press conferences you may arrange.

Mr Kony wants the truth to come out. However, he has made it clear that he would rather not be there when it does. This is because of his fragile emotional state.

We need to move fast on this. There is money to be made.

Brilliant as ever from Mr Trovato.
Thing is, I can see Clifford happily representing Joseph Kony – as long as he gets his fat fee.

Eish. Bad news – unless you’re @emmaturd or the Daily Mail – the much-publicised story of British tourists hijacked in Gugulethu over the weekend and the subsequent murder of one of them. The Daily Mail report, strangely full of apparent fact and devoid of any major hysteria (although I very much doubt that Lieutenant Colonel André Traut actually used the exact phrase “the taxi was waved down by gun-toting men”) is here.
Meanwhile, the cynic in me wonders if there would have been more hype and drama in there if the couple had been… er… *cough* white.

The thing is, South Africa does have a problem with violent crime – anyone who says it doesn’t is being ridiculous and you can tell them I said so.  But as a local or as a tourist, you can limit your chances of becoming a statistic by not doing foolish (and by “foolish”, I’m just being polite: I actually mean “utterly stupid”) things.

I covered this over 3 years ago in the now infamous Big South African Crime Post.

Don’t wave your iPod around in downtown Cape Town – it might get nicked. As it might in downtown New York, Amsterdam or Sydney.
Don’t wander round Nyanga on your own late at night. Or Harlem. Or the Manor Estate in Sheffield.

Yes, I said Nyanga and that’s just next door to Gugulethu, which is a place I would not be going to in a branded luxury hotel shuttle bus at 11pm on a Saturday night. While what happened to this couple should certainly not have happened to this couple, questions must be asked about what on earth they were doing there. Even if they weren’t aware of the risk they were putting themselves at, the hotel driver should have told them and refused to take them into that area.
Something isn’t quite right with this “detour into Gugulethu to see the nightlife” story in my mind.

Some will say that having “no go” areas shows how dangerous South Africa is, but I disagree with that sort of ill-considered exceptionalism. In exactly two weeks time, I’m heading up to Newcastle-upon-Tyne (in the UK) for the day, just to relive some of my old memories from University days. I’m going to visit several areas that day, but I’m not going near Benwell, because it’s a (seriously) high crime area and that would be putting myself – my possessions and my health – at risk. Sure, I might not get hijacked or shot, but I might get mugged or stabbed. Forewarned is forearmed.

This incident puts a huge dent in the good publicity that came out of the World Cup earlier this year and it frustrates and depresses me, because there are so many reasons that it shouldn’t have happened.
And while it might not seem a very sensitive thing to say right now, I feel that there’s enough publicity about South Africa’s crime problem for visitors to take some responsibility for their safety as well.

The fact that no-one took that responsibility on Saturday evening cost Cape Town a hit to its reputation and it cost Anni Dewani her life.