Ladies and Gentlemen, I have returned to the Southern Suburbs Tatler.
And therein to the Letters Page.
That’s where I found this beautiful piece of writing. Although, having described it thus, I should point out that I do have a few issues with it, which I will share below:

Speed Kills
On Monday March 11, a teenager lost her pet cat, killed by a speeding car in Oak Avenue in Kenilworth.
The cat had provided comfort and affection, crawling under her sheets to feel the teen’s body heat. She was writing exams that week, but her pet did not crawl into her bed that night. Her pet was found the next morning on the side of the road.

Drivers do not consider the grief they cause to the owners of pets. Speeding in suburbs causes hazards like this and also unnecessary noise which wakes residents.
This is totally ignored for the sake of the feel of power under the bonnet and the throaty noise of the exhaust. Instead, they must realise that speed kills and will have consequences. In this case the driver did not feel a thing, but the teenager and her family have been grieving.
We all know the speed limits. Why can’t people with powerful cars accept their responsibility to the community?

Henk, first of all, I am so sorry for your loss. Assuming it is your loss, that is. You never actually mention whether the warm teen in question is in any way related to you.
To lose a pet in these circumstances is difficult. To lose one that was writing exams must be doubly difficult.
And, because of these difficulties, I hate to question you regarding this incident. But I am confused, and that is a situation I hate to find myself in.

You should know that I am familiar with Oak Avenue. It’s just around the corner from us and I regularly used its steep hill to warm my calf muscles before my dreadful accident, which, incidentally, didn’t involve power under anyone’s bonnet, nor the throaty noise of an exhaust.

My initial question is this: How do you know that the car that killed this remarkable feline was speeding?

I thought at first that you witnessed the incident, perhaps while holding a SABS-approved radar gun, calibrated to SANAS standards, which you were fully trained in using by an officially recognised regulatory body, but then you mention that the animal was found the following morning. Surely only a sick, sick man could stand to leave an exam writing, probably dead cat to lie by the side of the road overnight.
Although that having been said, I doubt that it would have bothered the cat very much.

Thus, this is where my confusion arising. Were you there or were you not? You seem to be a caring man, Henk. Not one that would leave an injured or dying animal at the side of Oak Avenue. So I’m assuming that you weren’t actually there when the cat met the front bumper of speeding car (and vice versa).

And that assumption brings up another question.
Do you honestly expect a feline-positive outcome to a collision twixt cat and car?

The speed limit on Oak Avenue is 60kph. You could argue that a 60kph speed limit is too high for Oak Avenue (and indeed I may be inclined to agree with you), but that’s another argument completely and anyway, as you so rightly point out, “we all know the speed limits”.

Your assertion that “Speed Kills”, the title and indeed the gist of your beautifully emotive letter to the Tatler, does tend to suggest to me that you believe that whereas an average car travelling at less than 60kph would not have killed this cat, one exceeding the speed limit of Oak Avenue by travelling at – let’s say for argument’s sake – 61kph, would automatically result in its certain demise.

I’ve been doing some rudimentary calculations and I think you’re incorrect.

I think that the car would still have won this brief battle, even if it was travelling at 30kph. And that’s because it’s so much bigger and more solid than its squidgy, exam writing, organic opponent.

And I don’t want to have to wheel out the big guns to support my hypothesis, but suffice to say, Sir Isaac Newton told me so.

Henk, I’m sorry your cat is no longer with us and I trust that you have made alternative arrangements for someone or something to continue with the exam writing, shitting on your neighbours’ lawns and yowling late into the night.

But making mistaken assumptions about our local speed demons isn’t going to bring your unnamed pet back. And while the driver may not have felt a thing at the time of the accident (I’m assuming you mean both physically and emotionally here), having to remove teeth, blood and fur from the front of one’s vehicle is never a pleasant task, especially if he, like you, only found about it the following day. I’d recommend Wash ‘n Wax, which as well as removing all traces of dead cat, will also give a long lasting shine to the bodywork. You can get it from Builders Warehouse, or some of the larger Pick n Pay outlets.

But look at me, forgetting that it wasn’t you that hit the cat, it was a car driven by an inconsiderate and irresponsible driver.
A speeding driver.

Lines you never thought you’d be writing on your blog:

Orville the cat’s nine lives ran out after being hit by a car last year; but rather than simply paying his respects and burying him peacefully, Orville’s owner Bart Jansen has turned him into a work of art.

Orville’s body has been stuffed, poked, prodded and turned into a remote control helicopter.

In fact, let’s just run that by you (and me) one more time:

Orville’s body has been stuffed, poked, prodded and turned into a remote control helicopter.

Here’s the story. If only there was a picture. Wait, there is! 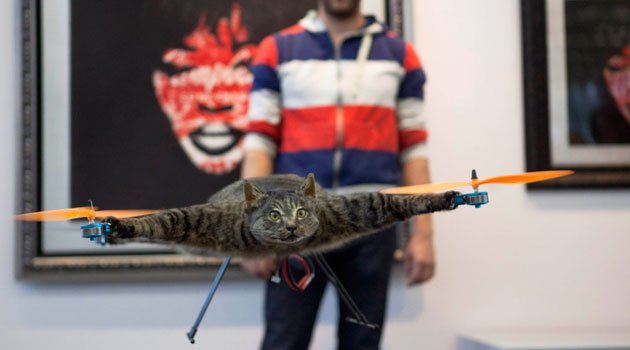 Amazing. If only there was a video.

Admit it. You’re looking at Felix and you’re thinking about jet engines, aren’t you?