Just dropping this (rather dated, but still) article from the Telegraph (UK)about De Hoop Nature Reserve in here.

With so many whales on display, where are the people? There are only a handful of us at Koppie Alleen (an area surrounded by massive dunes and the best place to view the whales) and earlier we drove through the park without seeing another soul for hours.

“Most tourists go to the town of Hermanus to see whales,” explains De Hoop’s assistant manager Sebastien Jones, who attributes some of the town’s success to its extensive marketing campaigns and proximity to Cape Town. “But while the tourists go to Hermanus, the people from Hermanus know to come here to watch the whales,” he adds.

Those readers blessed with pachydermesque memories will probably recall that Koppie Alleen was the subject of this blog post earlier in the year.

There are apparently A LOT of whales about this year, which will please my mum no end, as she likes whales.

I am rather embarrassed with myself. It would seem that I have become beach snob. Not, I hasten to add, as bad as those ones who will only ever be seen on Camps Bay or Clifton Fourth (or whatever the trendy Clifton Beach is this season). But when I found myself faced with this today: 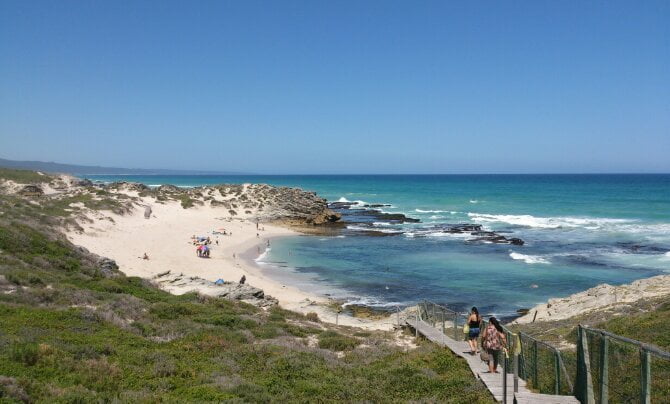 I was actually a bit disappointed.

Yep. I know. It looks beautiful – it is beautiful. But I wanted more. I wanted bodyboardable waves. And an occasional tree. There was none.

The beach is question is Koppie Alleen in the De Hoop Nature Reserve, previously somewhere we’d been wanting to visit and now, somewhere that we have visited. We paid R40 to get in, saw some zebras, many bontebok and several ostriches. And then this, tucked away (literally) miles from anywhere. But the rocks were sharp on the kids’ hands and feet, the sand wasn’t good for building things and the sea was difficult to get into, stay in, and get out of again. And those waves were tempered by a reef about 50 yards out. Pfft.

It was a good day out though, and my beach snobbery was sated by a visit to Struisbaai and some decent waves on the way back to the cottage. But I still feel bad for feeling bad about what is obviously a stunning little hideaway on the Whale Coast. And we’ll certainly be giving it another go sometime soon.

But today, I saw a helicopter and some sea urchins, so it’s going to be a hard act to follow.