From the always-entertaining Brian Micklethwait on the dangers of writing blog entries in advance and then getting them to automatically post while you’re away on holiday:

I’ve never really felt right with that.  What if an atom bomb goes off, and there I am still blogging about, basically, kittens?  (I know, the internet would not be at its best either, but you get my point.)

Yes, that would be a little difficult to explain to any survivors.

One of the few sites I unfailingly enjoy reading is Brian Micklethwait’s eponymous blog. It has a unique combination of a blend of subjects and topics that generally interest me, together with an endearing, informal, almost narrative writing style. It’s easy, interesting, pleasurable reading.

However, even by his usual high standards, I felt that Brian excelled himself earlier this week. And I would have written about this earlier had it not been for a combination of sick offspring, football matches in filthy weather and a rather garlicky farewell to Jonny Harvard. But since these things all contrived to delay me, I’m writing about it now.

I think that the main reason that I enjoyed Brian’s post about enjoying living in a failing neighbourhood so much was because I have been wanting to write about the same issues from a South African perspective for some time. I’m not sure that I live in a failing neighbourhood – I don’t think the same rules apply here as in the UK. But I can certainly agree that ignoring local electronic noises (burglar alarms) is a full-time occupation here.

In failing neighbourhoods, nobody does anything about electronic noises except regret them, on their blogs if they have blogs, otherwise silently.  In “successful” neighbourhoods, the damn neighbours are all over you at the slightest excuse, borrowing sugar, wanting you to have their keys when they are away on holiday and feed their pets, telling you what their names are and what they do.
Now you may be asking: if I hate people in general so much, why do I live in a big city?  But that’s the whole point of big cities.  In big cities you can avoid getting to know nearly everybody, and still have lots of excellent friends, in the form of the 0.000001% or whatever it is of people who live there who make really nice friends for you.

Much like Brian, I could never live in a rural location. I was born and brought up in a city, I studied and worked in a couple of cities and then I moved to Cape Town, which is a really big city. I love to hear the rumble of urban white noise: silence scares me. But equally, I find that living in an urban environment allows me to blend in, to be lazy and not make an effort to meet new people, but not to feel guilty about it. In fact, it’s even easier in South Africa – a country where we all hide behind big physical walls as well as the metaphorical ones we share with other nations.

As for my neighbourhood, its a pleasant enough place: mature, leafy, decent, quiet. Perhaps too quiet.
I do know my neighbours’ names. I do smile and say hello. I do look after their house while they’re away. Why? Because they are nice people and it’s no trouble really. But equally, deep down, maybe because of the scare stories you hear and read all the time, perhaps you feel that you never know when you might need a friend. Thus, if I hear their alarm sounding during the night, I will call the next morning to check everything is alright. OK, it might be a bit late to help out if there was an incident, but then this is SA, where a friendly bloke with a gun hurries to your doorstep to chase away the bad guys if your alarm sounds anyway.

But one problem with living in such a quiet area is that there is always an alarm going off somewhere and because it is a such a quiet area, you can always hear it. Sometimes just a single woowoo, but more often for hours at a time, punctuated every three minutes or so by a gap just long enough to make you think it’s stopped, before it dives back in to your ears, invading your headspace again. And you know that it’s a false alarm and that there’s no-one home, and that the friendly bloke with the gun can only ring the bell at the gate and shrug and walk away when there’s no response.

If the idea of this noise is to alert me to something wicked going on (or having gone on when the noise began) to the point of me actually doing something about it, it is failing.  When it stops, I will forget about it.  Until it stops, all I will do is sit here wanting it to.

Interestingly, most of these alarms seem to sound on sunny weekend afternoons in the summer, when all one wants to do is braai and crack open a cold beer or nine by the pool. Or maybe that’s just when I hear and hate them the most.

All in all, I think city life gives me the best of both worlds. I can hide away just enough to make life bearable without inconveniencing myself. I can happily play my part in the symbiotic relationship with the people next door. I can smile at passers-by while I wash my car in the driveway, safe in the knowledge that it will go no further than a good morning. And the annoying electronic noises are no intrusion when compared to living under the microscope in a rural environment where you get concerned villagers enquiring about your bowel habits if you hit a spot of mild constipation.

To borrow and adapt a phrase I recently read: Non-Capetonians often complain that most people in Cape Town are unfriendly.  That’s pretty much the point of the place.  That’s exactly what’s so great about it.
(That and the mountain.)

Is it just the drugs, or when you get to my age, does your short term wotsit start to fail?
I find myself using words like wotsit instead of the specific noun I should have used – just like my grandmother used to do. Thingumie is only a short time away now. And from there I’ll start calling my auntie by my sister’s name* and then I’ll know I’m getting properly old.
But it’s not just speech. I have to start writing things down or I forget to do them – however important they may or may not be – and then I have to cross them off the list to remind myself that I’ve done them:

If you’re in Cape Town, Brian Micklethwait’s Kings Cross sunset may help to jog your memory of drier, warmer times. 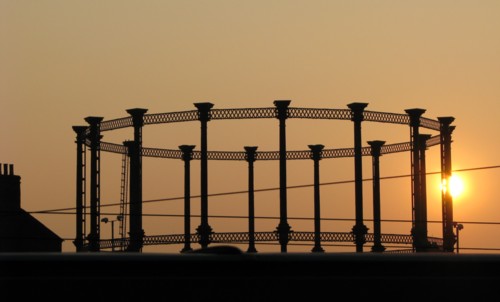 Always the sun? Not this weekend.

Ah yes. I remember those heady summer days. And while Brian laments the lack of clouds in his sunset, if he’s really desperate, we’ve got a fair few here which I’m very willing to export. So – in the somewhat unlikely event that there is anyone in the UK currently missing the cold, damp weather – just send me a email and I’ll happily arrange a courier.

But all in good time. Right now, I have to go and find out why my son is crying and clawing at the kitchen door.

* not in a Josef Fritzl way though.

Why do we blog?

It’s a question that many inferior bloggers attempt (and fail) to answer on an all too regular basis (along with an annoying tendency to use the word “musing” far too often).

Brian Micklethwait* knows why he blogs:

… every so often I have to remind you people that my most important reader is me, in a few months or years time … This will warm the cockles of my faltering heart, the way me burbling on about the Cold War ending, and what a Good Thing that is, never could. Oooh. I see that in April 2008, I was of the opinion that the Cold War ending was Good. Well, twiddledidee.

Brian’s music storage challenges continue in his brilliantly and descriptively entitled Exciting Posting About Shelves, but aside from showing off his new CD rack, he also hits the nail right on the head as to one reason why I’m writing what I’m writing.