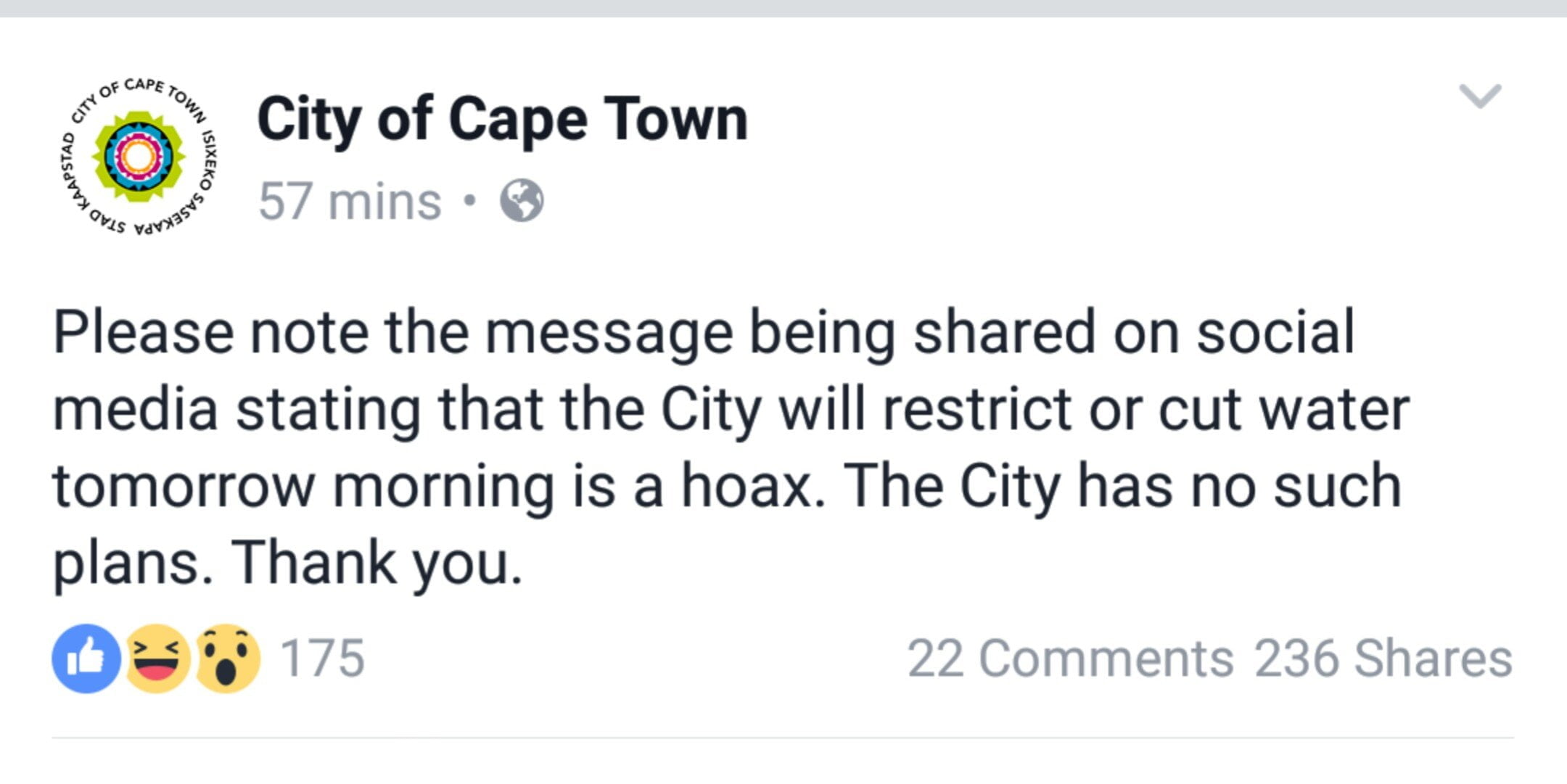 And the response from Alexander Blows:

You have to be pretty daft to believe hoax messages going around on social media about water rationing are true. But it takes a special sort of idiot to “take precautions” even once you’ve got the direct evidence straight from the horses mouth.

They walk among us… 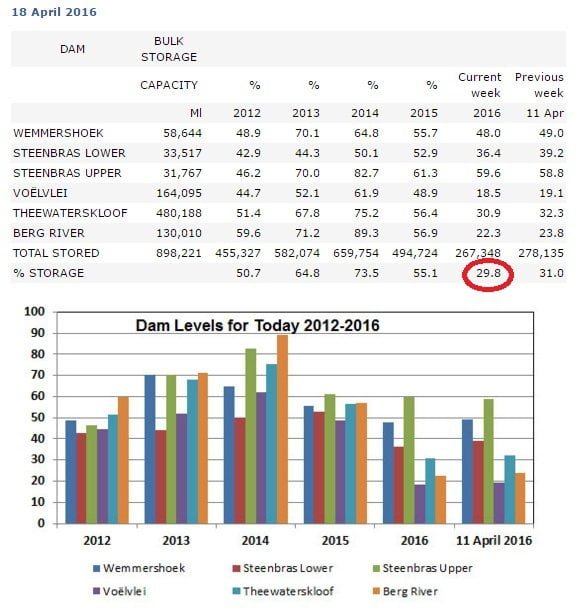 We are now officially critical.

And yet no-one seems to give a toss.
Look around the suburbs and everyone is still wasting water.

Right. The general consensus seems to be that we’re done with winter now and the good news is that Cape Town’s dams are full to bursting. Not literally though, I hope. 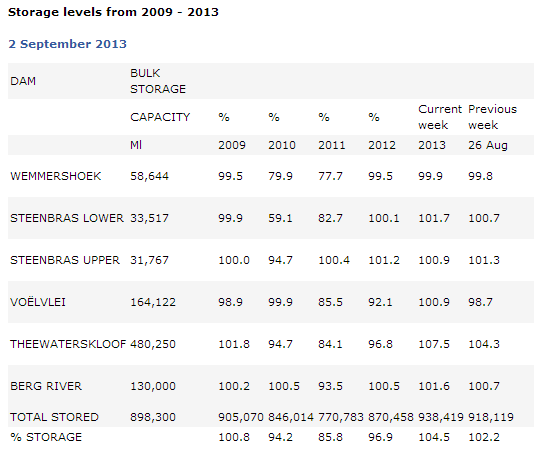 Yes, you read right: our dams are 104.5% full right now, with just Wemmershoek letting the side down with its paltry 99.9%. “Big Boy” Theewaterskloof is looking especially resplendent on 107.5%, no less.
How can this be? Well, it’s not like the water rises above the dam wall and is held there by a giant meniscus or anything (although that would be really cool to see). The extra 7.5% is due to the difference between the intended capacity of the dam and the actual amount of water it can safely hold, as described here:

Man-made dams are artificial catchment areas and, by definition, are storage areas for water. When the dammed water reaches a level that indicates the maximum water that that dam can hold (before being put under stress by additional water pressure), a drum gate opens automatically to prevent over-pressure. The drum gate is designed to keep the dam at the maximum of the storage level – the so-called ‘full’ level – but often the ‘full’ level is well below the dam walls max capacity, for safety. So, as the water level begins to rise, the water level above the ‘full’ level is marked, and typically ends at 10% (or 110% if you like) above ‘full’. At this point, the water pressure is considered to be dangerous and sluices are opened to let water out. These sluices are carefully controlled to make sure that the river below the dam wall does not breach it banks and ruin expensive weekend homes! I think that saying the dam is 107% full is meaningless, and misleading, even though it an engineering necessity.

It is important to bear in mind that the time to save water is when there is water to save, and we should therefore not become complacent about our water saving efforts. Cape Town will never be in the position of having sufficient water to waste, and we must continue to be vigilant.

Right you are. Not that my garden will need any more watering for about a month given the last couple of weeks.

I finally got round to drinking some of my homebrew last night, and I was hugely impressed and surprised. It’s actually really decent stuff and I’m rather chuffed because it was my first ever attempt and I really didn’t know what I was doing.

That said, I only managed (I think) to make two of these “11 mistakes that every new homebrewer makes“, so perhaps it could be even better next time.

The post in question comes from themadfermentationist.com – “beer, bread, cheese, funk”. I make bread too, but cheese seems a little advanced and funk is frankly way beyond my ability.
But back to the beer and those things I did wrong:

Yes. I did this, although Cape Town tap water is actually really lovely.. Apparently, (I was belatedly told), you can get free spring water from the SAB Newlands Brewery, so maybe I’ll do that next time.

Actually, I have no idea how much the package of priming sugar weighed, but I chucked it all in anyway. Waste not, want not. And I’m not sure if it had a detrimental effect on my beer, because I have nothing to compare it to.

Anyway, I’ve looked at all 11 mistakes and I’m determined not to make any of them next time, although I can’t promise not to make some other ones instead.

And they delivered today. Happy times!

You can now listen to (some of) Morten Harket’s new single “Lightning”, here.

Does fracking cause earthquakes? No, says Ivo Vegter, although certain commenters disagree. It’s ok though – Ivo gleefully re-educates them.

Cape Town water is still safe to drink, despite a slight “earthy” taste. It’s just the 15ng/litre of geosmin, like it is every year at this time.

What do you call a fish with no eye? A fsh. As spotted on the menu at Erawan last night. Great place, awesome decor, amazing food.

And now, in the interests of romance, I’m going to sit down and hug a beer in front of some Champions League football.