As spotted this morning in Rondebosch, “No Vote, No Sex”: 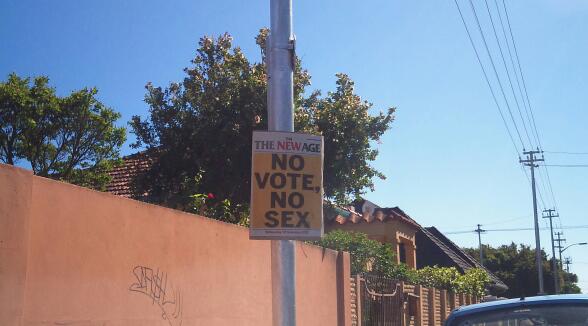 Could they possibly be talking about this?

Best not to chance depriving yourself – vote here and get all the benefits that come with it.
(terms & conditions apply)

With the 2011 Municipal Elections not far away (don’t forget to register to vote this weekend, folks) the election machinery of our erstwhile political parties is once again being dusted off after a couple of years in the shed and already the first posters (albeit registration posters, rather than election posters) are being blown off the streetlamps all over Cape Town.

This election will be the first one since the inception of The New Age (TNA), the national daily newspaper whose owners, the Gupta family, have those infamously tight ties to Jacob Zuma. While TNA denies that it will be merely a mouthpiece for ANC propaganda, there are those who have their doubts, namely the scathing Mandy de Waal in the Daily Maverick last September when the paper was launched:

aside from the obvious currying ANC favour, the editorial focus appears fragmented.

and her “you do the math” implications:

The New Age has moved some way from Essop Pahad’s protestations in July that the newspaper was a purely private venture. “I have said in the (PR) statement that it is not a pro-ANC newspaper, but let me repeat it please. It is not and will not be an ANC-affiliated newspaper to start with because this is a purely private venture.”
Pahad is a director and senior advisor to TNA Media which publishes The New Age.

She doesn’t stop there either – listing a whole raft of reasons why she believes Pahad is not being completely honest and why it’s obvious that The New Age is merely propaganda in return for influence at the highest levels and thus should not be trusted to deliver an independent viewpoint.

And do you know what? She may well be right.

But then, what of her own vehicle, the Daily Maverick? A smaller outfit than TNA, certainly and we are told:

rather than directly from the pockets of Jacob Zuma’s best mates, which is reassuring. As is their assertion that:

The Daily Maverick is run by an independently owned, private company with no affiliation to any other media group (or political party or religious organisation.)

So why then, when I stumbled over to their site this evening, did I find a prominent DA MP preaching the gospel according to Ms Zille on their Opinionistas page?

Doubtless, the Daily Maverick editors will claim that Ollis is merely writing in his personal capacity, but firstly, how is the reader supposed to know that? Nowhere (as far as I can see) are we told that these are Ian’s thoughts and not those of the DA (save for the pithy last line of his second column on why the DA and Cosatu should but won’t help each other to oust the ANC from government: “And this is all just my view. Of course.”).
And just how different would Ian’s feelings be from those of the political party he has served for 12 years, anyway?

Secondly, if these are just his personal views, why exactly is the DA’s Shadow Minister of Labour being allowed to air his personal views on his political opponents: “Cosatu and the ANC are still not accustomed to genuine [sic] listening to the public at large” on a site “with no affiliation to any… political party”.
Why just Ian Ollis of the DA? Where are the ANC MPs, the IFP MPs, the FF+ MPs (each presumably writing in their personal capacities, of course)?
Where is the balance?

At the very least, the inclusion of Ollis’ columns is a poor decision by the editoral staff of the Daily Maverick in that it obviously compromises the independence of their product. At worst, they could easily be accused of  hypocrisy when one reads the vitriol with which they went after The New Age for that newspaper’s alleged tacit support of a single political entity.

However I look at this, The Daily Maverick’s integrity is thoroughly compromised.