In twisted celebration of the recent World Cup win, resident crosswordist SwordDevlin has come up with a rugby-themed crossword.

I don’t really understand rugby or crosswords, so this one clearly isn’t for me, but you can have some celebratory fun with it.

My favourite clues this month are the ones that don’t remind me of the score in the final. There aren’t many.

Hands in the ruck, Green 6.

The Rugby World Cup (2019 version) begins later this week, and anyone who’s anyone has published a crossword about it. Rugby is a big deal in South Africa and the country is ablaze with excitement about the upcoming tournament.

I’m less excited about rugby than your average local might be. I enjoy most sports, but I enjoy some more than others and rugby doesn’t tend to be one of them. I thought that I was going to enter a prediction league, but then I didn’t (which actually shows just how poor I am at predicting things). 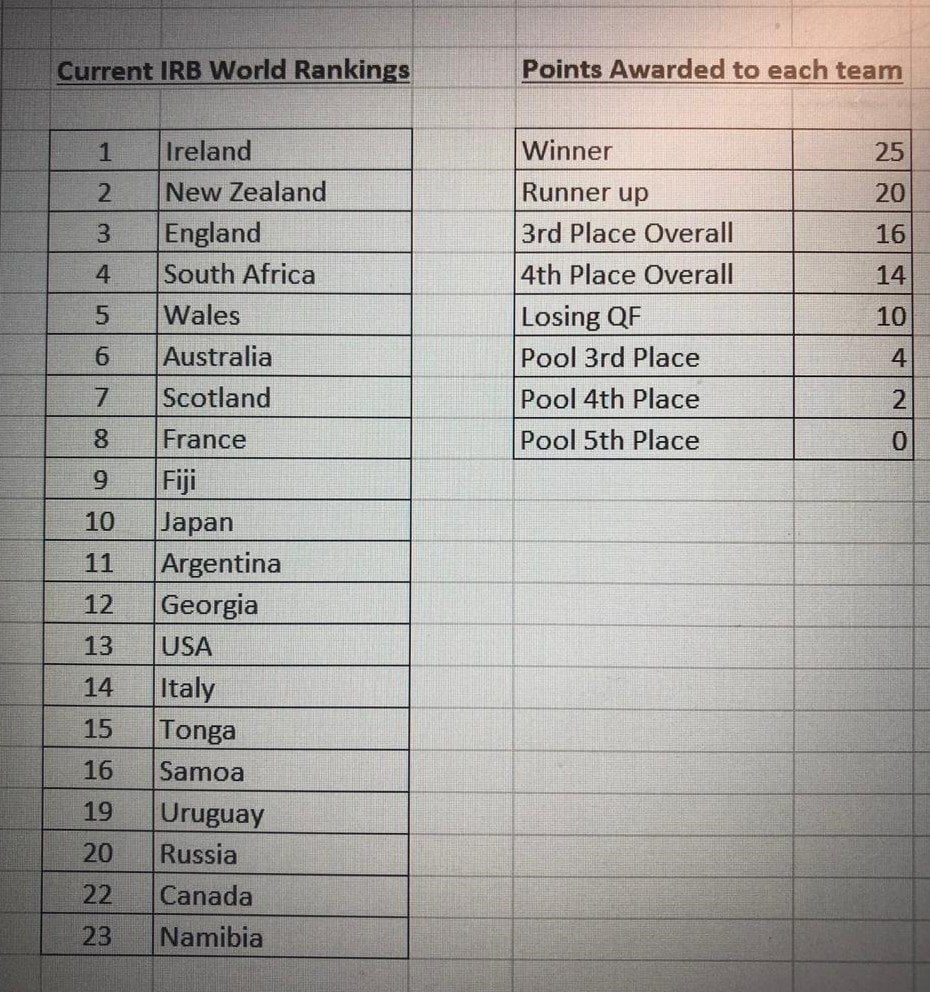 You have to pick four teams that are going to score you more points (using the scoring system on the right hand side) than any of the other four teams that anyone else has chosen. And just before you dive in with Ireland, New Zealand, England and South Africa, there’s a twist. The World Rankings of your chosen teams must add up to a total of at least 30. I’ve been doing some rudimentary calculations, and those four above add up to 10.

As I see it, you have two options here. And I don’t think one of them works.

The one that doesn’t work is to pick an average of 4 x 8½. But the chances of the likes of France or Fiji getting into the semi’s or beyond (which is where all the points are) is not great. And if you’re going to stick a Big 4 team in there, you’re going to have to supplement it with the likes of a Samoa or a Uruguay. And they’re getting you an absolute maximum of 2 (possibly 4 if Kami smiles down upon Samoa). For the record, if I was going with this system (I’m not, because I’m not going with any system), I would have gone for South Africa, Australia, France and Georgia.
Georgia are, apparently ranked higher than Argentina. Who knew?

But that plan won’t get us anywhere. Probably.

So my idea was the take the obvious hit on a rank outsider, and make hay with some big names. With that in mind, step forward Canada, South Africa, England and New Zealand.

Canada won’t set the world (cup) alight, but they will beat Namibia* and so will score 2 points – just like Uruguay would have done. But then you have some big names up top who are going to do the business. Of course, Wales or Ireland might also do the business, but to my mind, the top 5 (or even 6?) are all capable of beating anyone else on any given day. And so you have to take three from six, bearing in mind that it still has to add up to 30, and knowing that no-one can pick four big names, because the competition rules don’t allow it.

I’ll revisit this post during and after the Rugby World Cup (the final is on 2nd November) and let’s see just how well I would have done.

All while remembering, of course, that I can’t even predict how I’m going to end this po-