Everyone has now heard how “close” the Scottish Independence vote was (but in case you haven’t, there was 10.6% between the yes and the no vote totals). I’d also heard that Glasgow had voted Yes and Edinburgh had voted No.
What I didn’t realise is that basically, it was only Glasgow (ok, and Dundee) that had voted Yes overall. That said, it’s worth noting that because of the paucity of population elsewhere in Scotland, those 4 tiny blue areas make up almost 20% of the electorate. 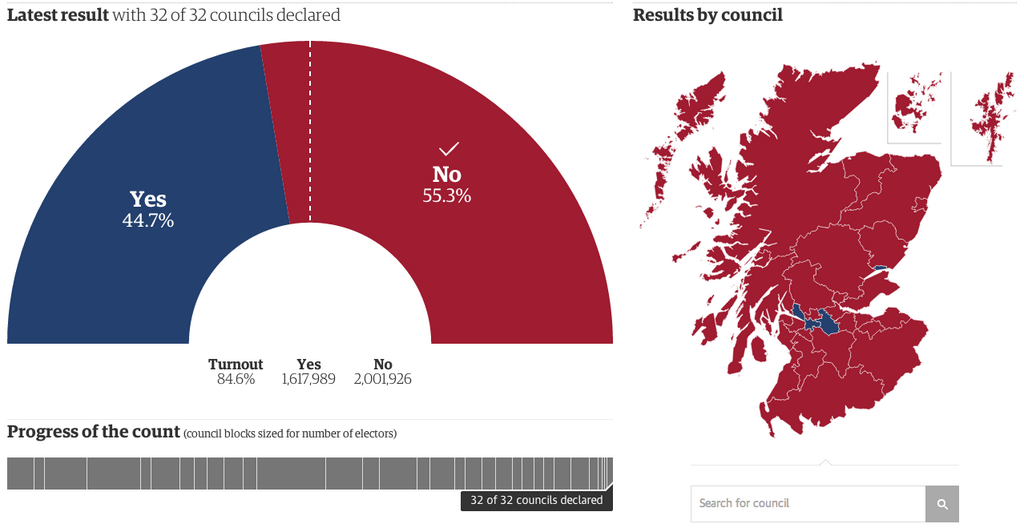 That’s not to say that the results elsewhere weren’t close. In fact, apart from the outlying islands, it was all very tight.

And, in another interesting stat, with the Scottish National Party supporting independence and the Liberal Democrats, Conservatives and Labour against it, the referendum results bear no correlation to the general election results of 2010. None of the SNP held areas voted Yes, and the areas the did vote for independence were held by either Labour or the LibDems. This shows either that there’s been a shift in perception since the 2010 election (maybe) or that this issue transcends all other party politics (yes).

What it also shows is that maybe Glasgow should go it alone and become an independent state. It would leave about half the people unhappy if they did go, but then about half the people are unhappy anyway. And if you thought that Scotland was going to become a failed state after declaring independence, then wow, Glasgow would be a disaster. Even more so than it is now.

If that’s possible. (Spoiler: It’s not)

So we English are stuck with subsidising Scotland for a bit longer. Our annual rainfall stays unrepresentatively high and our life expectancy remains reduced.
But it’s nice to still be the vaguely United Kingdom.

As the Scottish Independence Referendum approaches, I’ve been keeping my distance, watching from the back seat. It’s not my shout, of course, but it will obviously have repercussions on my native homeland. Namely, that if the ‘Yes’ campaign wins, we’ll have to bail them out when things go horribly wrong (as they inevitably will) in the next few decades.

With a binary vote and with things being so tight, these tweets from Simon Schama could be worryingly prophetic:

what no-one, understandably, is talking about is how alienated half of Scotland will feel should a yes prevail and their lives change

will they rally loyally and accept the slimmest majority as a mandate. Very very unlikely. Massive trouble ahead. — Simon Schama (@simon_schama) September 12, 2014

And while the “other” 50% might also feel alienated if the no vote wins this week, the status quo prevails. Yes, they can be disappointed or annoyed that nothing changes, but nothing changes. If the yes vote wins, everything changes, despite half the population not wanting it to.