OK. Let’s talk about #RBOSS.
Fair warning: this could be a long one.

Names below have been redacted because this isn’t meant to be a personal thing, ok?

I’m a member of several Facebook groups connected with and concerning the Isle of Man. I do this because I enjoy keeping up to date with the news from over there and because I will never get tired of looking at pictures of what is a very beautiful place. Some of the news and photos are lovely, some are less good, but they all go some way to portraying the uniqueness of Manx island life.

See, there are one or two people on the groups that evidently don’t feel their photography is good enough, or that their subject is simply not beautiful enough to share. Much of the time, I’d disagree: as with Cape Town (and as I have stated many times on this blog), everything you need to make a beautiful image is right there in front of your lens – you’re already a long way up that scale. The skill then comes in making something beautiful into something exceptional, but there are only a few photographers that can do that. Don’t knock yourself because you can’t do it, just as you shouldn’t knock yourself for not being able to do a sub-10 second 100m.

Continuing with my crap analogy, if you want to go 100m in 10 seconds (or less), you can: just cheat. Get on a bike or jump in a car. Of course, such devious methods are going to be easily spotted by athletics fans and fellow athletes, so you won’t get away with it, but still – technically – you did 100m in 9.5 seconds. Well done, you.

You can cheat at the photos too. Software that can remove people and distractions from your images, bring out the highlights on that dark wall against the bright sky or simply add a bit of “pop” to your photo, is readily available and look, there’s nothing wrong with using it to make what your camera saw look a bit more like what you saw.

Or what you wish you’d seen.

In addition, technically there are no rules here. What you like might not be what I like and vice versa. I hate over-edited photos; you might love them. But please, just be honest and tell the world that you’ve had a bit of a fiddle with Snapseed or Lightroom. Own your edits. You wouldn’t expect to get away with riding a 1000cc Honda CBR down the Olympic sprint track and still take away the gold medal.
Don’t take us for fools.

See, the thing is that I have contacts on the Isle of Man – specifically on the bit that you’re taking sunrise photos – and we can see that your photos have been embellished. A lot. We’ve taken to calling it the Ramsey Bay Over Saturation Society: #RBOSS

Here’s a photo from last Thursday’s sunrise there:

And here’s what you did with it:

But as I say, some people like edited photos more. And that bottom one clearly is edited, isn’t it?

So what’s going on then?

How strange that you’ve never seen colours like this before. It must be the UV filter our protagonist is using. So, what do UV filters do to bright, colourful images like sunrises and sunsets, then?

The extra flat piece of glass–which is often not coated–will cut the saturation (richness of colors) and contrast of your sunset photos.

One swallow doth not an over-saturated summer make though, so let’s see some more, shall we?

Mate, there were bits of Hiroshima just after the bomb went off that were less blown up than this. 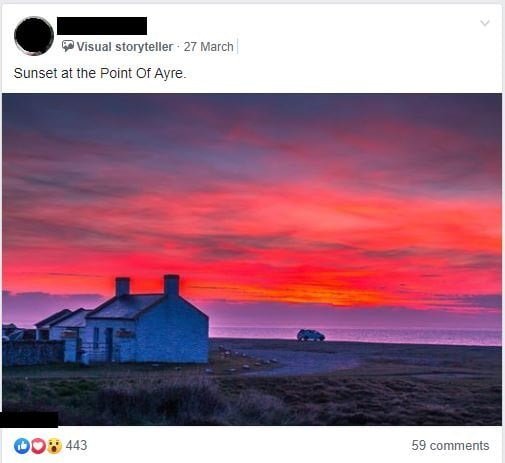 #RBOSS on tour (just up the road a bit, anyway).
Glorious. And horribly over-saturated. But wait: 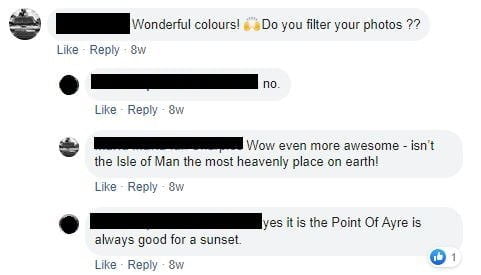 Can we just have a look around the outline of the cottage here? That telltale white fuzzy glow that comes when you… er… add a filter to your photos. Here’s one of some planes flying over our back garden that I hectically #RBOSSed just now to demonstrate: 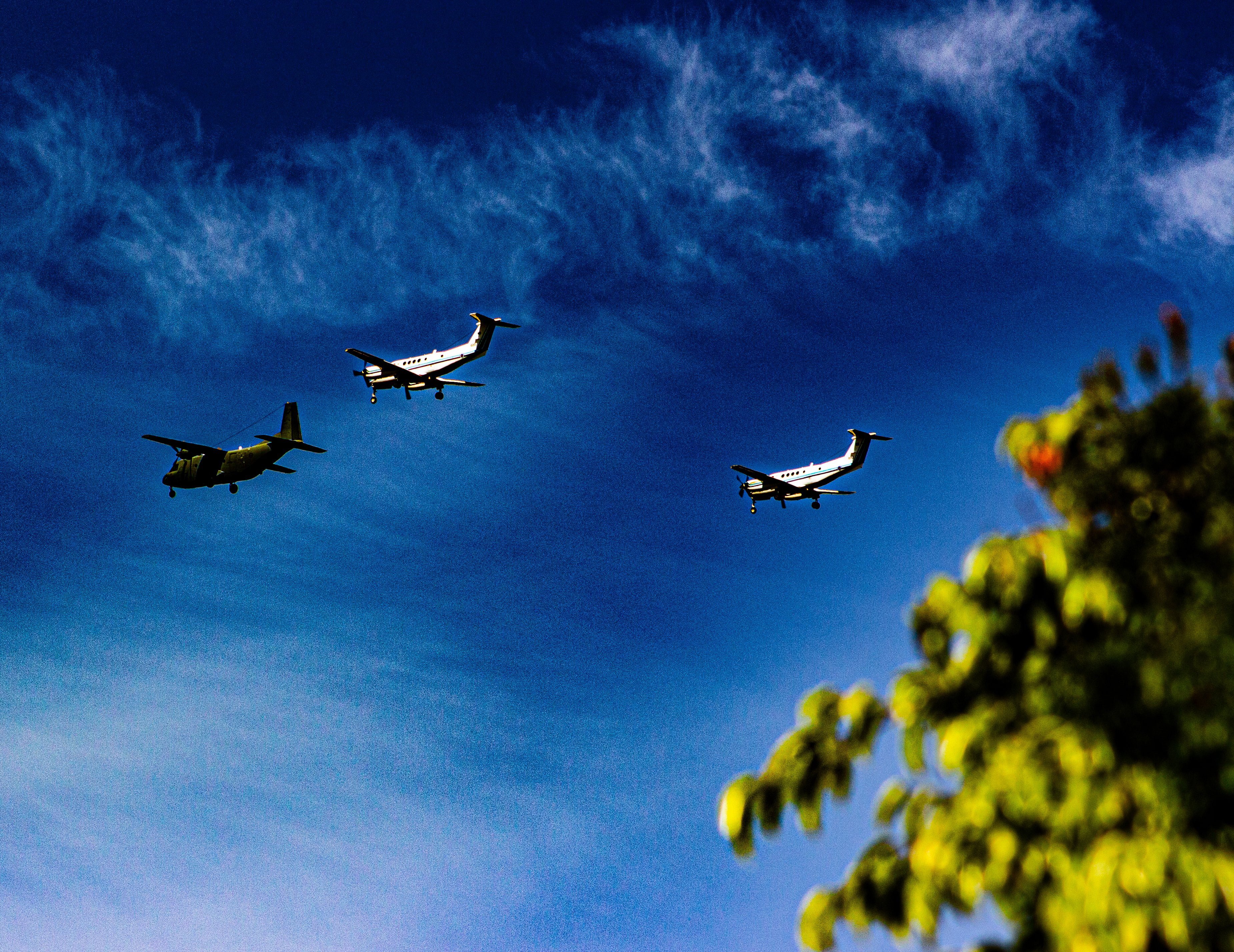 Look at that subtle white fuzzy glow around the back plane, especially.
Recognise it?

So what is that weird smell of burning underwear?

I have questions. Here they are in no particular order.

Why would you #RBOSS your images?
To be fair, this question raises more questions than answers.
Do you, as I suggested above, not think that what you caught with your camera is spectacular enough? If not, why not? And why does it matter? Is this all about the instant gratification and self validation of getting Facebook Likes? It does seem that way.
That very first (unadulterated) image in this post is pretty, but it’s not going to get (and indeed it didn’t get) 600+ positive reactions. I’m fairly sure that the guy who took it isn’t very bothered about that. Mr #RBOSS though – well, evidently he couldn’t bear to post something so horribly pale peach, so washed-out, so drab, so ACTUALLY REAL.

And now if you’re going to do it, why lie about it?
I’m no world expert in the field of photography, but it’s clear to me (and lots of other people) that these images (and many, many more like them) have been altered. And yet, repeatedly, when asked directly, he denies it.

There’s a word for that behaviour.

The fact is that many people on that group are decent, honest individuals who are quite happy to believe that what is on those images is an accurate representation of what was going on in the sky that morning (or evening). And why would they not? After all, the guy who took the photo, the one who stood and gazed in wonder at the mildly pink sky has just said that that’s what came out of the camera.
I think it’s sad that they are being deceived this way. And it’s wholly unnecessary.

Other than those last two sentences, there’s no real conclusion to this post. I think I speak for many individuals when I say that it just needed putting out there. What people choose to do about it (spoiler: probably nothing) is up to them. It would be nice if it stopped, but it would be nice if people were just better generally and that’s not going to happen either. In the meantime, repeatedly taking the piss seems to probably be the best way to deal with it.

Oh, and for the record:

Reproduction [of screenshots of public websites] for purposes such as criticism, comment, news reporting, teaching, scholarship or research is not copyright infringement.

So we good? We good. Thought so.

Have a special day.