Now look, I do think that the Mail & Guardian newspaper is one of the better examples of journalism in South Africa, albeit that the competition is not all that it could be. But since you’re one of the better ones, then perhaps when you’re tweeting about your “journalistic excellence”, you could at least ensure that all the words of the headline on the edition pictured are spelled correctly. 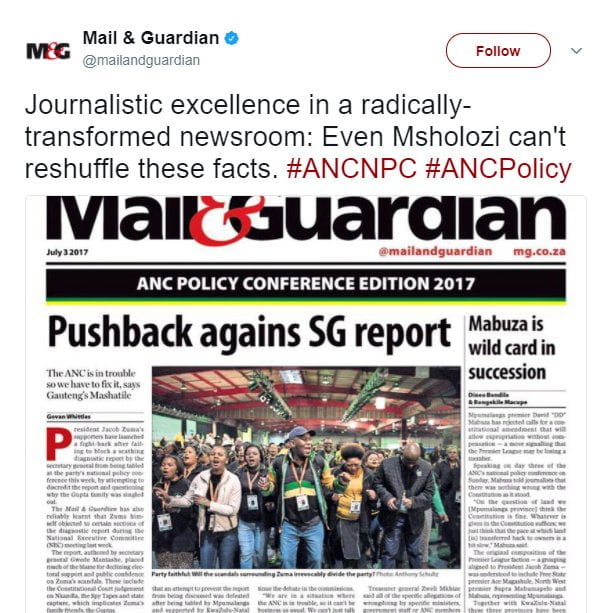 Interestingly, agains all the odds, this offending tweet has since disappeared.

I’m only an occasional reader of the Mail & Guardian, but when I do give myself the opportunity and can find the time, it’s generally an interesting read. Last week I was rather shocked and disappointed by Andile Mngxitama’s column “The face of white supremacy” in which the writer accused Gareth Cliff of being racist for – as far as I could work out, anyway – no apparent reason save for his own desperation to call somebody (white), a racist.
I should also say that if was not just the content of the column, but also Nic Dawes’ decision to publish such nonsense that left me feeling a little bewildered.

When I raised the matter on twitter, I wasn’t the only one finding myself in that mindframe: the erudite Jacques Rousseau informed me that he had written a rebuttal to Mngxitama’s column, (which would be far more articulate than anything I could ever write) and which he hoped would be published this week.

Well, it was, and it is brilliant. A perfect mix of rationality and justified ridicule, all dished up with a garnish of mild sarcasm:

Of course, Mngxitama’s argument relies on something called “anti-racist decoding”. I regret that I’ve never drunk as deeply from the well of postmodernism as Mngxitama has, because this decoding appears to fall outside of my sphere of competence, leaving me with only the suspicion that he’s talking nonsense.

I would heartily recommend a read of it if you can get hold of some dead tree. (But then I would say that, because I am white.)
Here it is.
If it was up already, no-one would buy the paper, see?