“My goodness,” he thought, the realisation having suddenly dawned upon him. “I haven’t listened to any Muse in ages.”

And this is a bit weird really, because they’re one of those bands nearly all of whose songs I nearly always enjoy. And thus, with wanting to share something from them, the only problem was which one to choose. I had a good time listening through several (or more) of their efforts before plumping for Mercy.

And then I changed my mind and went old-school with Bliss. In which the lead singer takes a bit of a tumble.

We’ll save Mercy for another day. Soon.

All set to the backdrop of Matt Bellamy’s soaring vocals.

Popping a Muse playlist onto my Spotify before heading off to Europe now seems like a very sensible idea.

There’s new stuff from Muse? So why would I blog anything else today?

It’s called Dig Down, and the video is – once again – set in a futuristic, post-apocalyptic, digital world full of cyborgs and flickering monitors.

Remember Madness from their last album? Well, this is basically exactly the same song. The trouser-wobbling electronic bass is there, the Queen-esque theatrical guitars and vocals are there, Matt Bellamy’s imploring voice soaring over the lot of it. No progression here, to be honest.

Perhaps because they announced that they will have a new album out this time next year, or perhaps just because Steve Jobs’ spinny touchy wheel thing on my iPod looks really nice but doesn’t actually work every time, I ended up doing an Artists – Muse – All Songs – Random on my way into work this morning. 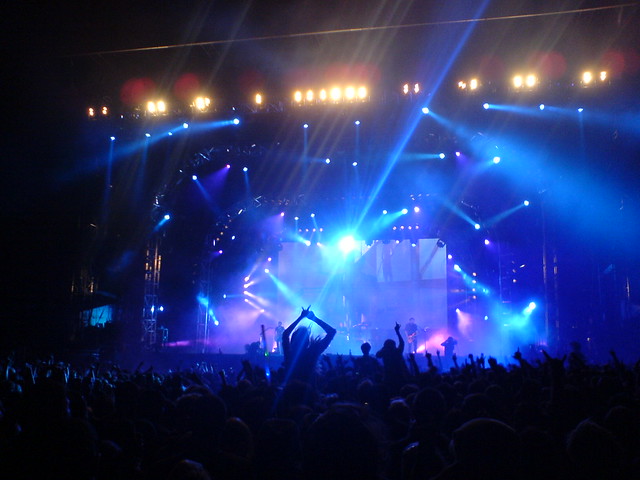 At first, it seemed easy: Unintended was on, and as the orange sun rose over the mountains, that seemed perfect. But then there was suddenly New Born and that was great too. And then Map Of The Problematique, arguably my favourite Muse song, but quite dangerous in an overly-energetic way.

Basically, each song seemed better than the last, which is no bad way for things to be going, but which wasn’t helping with any sort of decision making. So I made a plan: whichever song was playing when I arrived at work would be the one I would share. And that was Falling Away With You.

Sadly, the only version I could find of Falling Away With You was this rather dodgy live piano cover. Complete with a lot of coughing and other audience noise. Ugh.

You deserve better. And so you get this one, with its salutary-message-shock-twist-in-the-tail ending:

According to that link at the top, Matt Bellamy has said that the new album:

…should be something that really does strip away the additional things that we’ve experimented with on the last two albums, which is electronics, symphonics and orchestral work and all that kind of stuff.

That disappoints me a little. Not because I don’t enjoy a bit of vintage Muse (see this post, for example), but because I thought that the last couple of albums were ground-breaking in the way that they dragged in all sorts of drama and showmanship on top of their rocky foundation. It was all so new, so adventurous, so different.