I watched a little Bundesliga and La Liga football this weekend and for their sakes, let’s hope that the games I chose weren’t representative of the wider situation in those countries.

First off, 1. FC Köln v Bayern München. Bayern aren’t the team you want to face in your final league game of the season, especially when you’re struggling to avoid relegation. And when the visitors led 4-1 with seconds to play, the Köln fans showed thei disapproval thus: 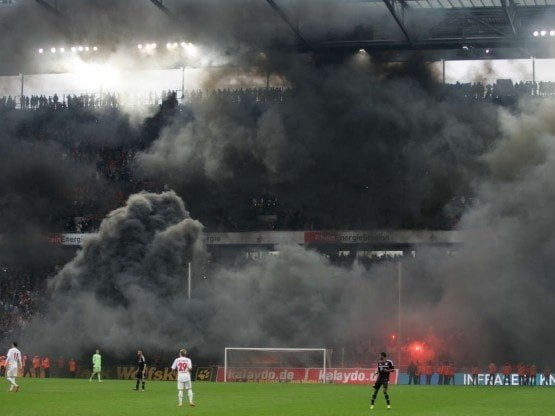 (Another pic here). Obviously, the ref had no option but to take the players off, the game was (technically) abandoned and the result stood, much like the lines of riot police and stewards across the centre of the pitch for almost an hour afterwards.

Meanwhile in Spain, Real Madrid were coming from behind to condemn home side Granada to a nervy last match next week. The result of this was an ugly brawl between Granada players and the match officials at the end of the game, including a bottle being thrown at the referee by one of the players. Can’t blame the fans for that one, although the referee had to leave the pitch under the protection of three riot shields. In all my years of watching footy in England, I’ve never ever seen that either. Although it seems fairly common in Spain – who could forget the UEFA Champions League encounter between Real Madrid and Barcelona last year, when exactly the same thing happened.

And the beautiful game, as played in South America, is actually far less beautiful when you look more closely.

I’ve seen players injured on the field of play before, but rarely does the trainer have to come on and treat the player while riot police protect them from objects thrown from the crowd. And by “rarely”, I actually mean “never”.
Police in England don’t use rifles and rubber bullets to disperse angry fans, like they do in Brazil (World Cup 2014, anyone?).

Yes, England has certainly had it’s fair share of problems with hooliganism in the past. But that reputation should be left right there, in the past. While there are problems occurring regularly in other leagues around the world, English football has been free of any major trouble for many years now.
Maybe it’s time that FIFA sorted out some of the other “big” names in world football before accusing English fans of being troublemakers.