Look, as a description of the current state (and oh, what a state) of affairs in SA right now, this tweet is pretty accurate. 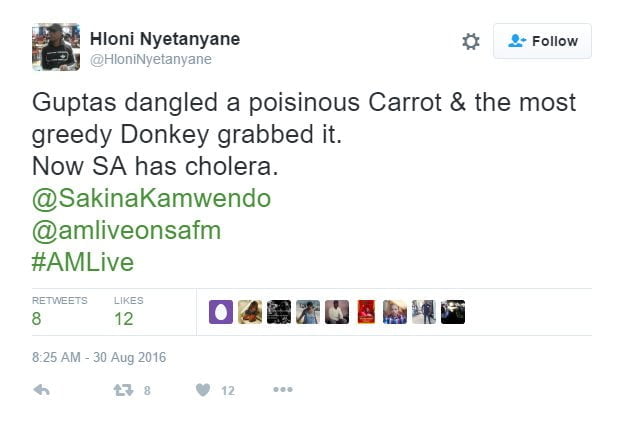 However, as a description of how you get cholera, it’s wildly inaccurate. That is, unless the carrot in question has been washed in cholera-infested water.
And I wouldn’t put anything past the Gupta family, to be honest.

Cholera is an infectious disease that causes severe watery diarrhoea. It’s spread via the faecal-oral route. That means that the bacterium in question – called Vibrio cholerae – er… “exits” the body of a cholera sufferer and somehow ends up being ingested by another individual. This is often via it getting into the drinking water system through poor hygiene and inadequate water treatment though.
You don’t get it from eating carrots (with the caveat above firmly in place, that is).

And anyway, even if you did cholera from eating carrots, there’s no evidence that donkeys can get cholera. In fact, in their 1996 book “Cholera and the Ecology of Vibrio cholerae“, Drasar and Forrest cite a 1974 study by Sanyal et al. in which 195 animals (including donkeys), living in a cholera endemic area in India were routinely tested for the bacterium over a period of a year. Pathogenic V.cholerae was only isolated from 3 cows, 2 dogs and 2 chickens. (NB – no donkeys).

And then, even if the donkey did eat the carrot and you could get cholera from carrots, and even the donkey could get cholera, it’s a big stretch to suggest that the entire nation would then become infected with cholera, just because a donkey got it from a poisinous [sic] carrot. Just what was this donkey doing? How on earth would it successfully have infected 55 million people? That’s biological warfare on a massive scale. I’m not sure anyone could carry that out, let alone a lone donkey, who, lest we forget, is allegedly rather unwell.

So, no. As an accurate account of the source of a cholera infection and how it might be spread, this tweet is rubbish.
As a metaphor of what Jacob Zuma and his friends have done to South Africa though – pretty good.