Me: [Switches TV on]

Golf.
A golfist is about to putt the ball from a seemingly implausible distance to guarantee success.
Silence abounds.

Me: [Switches TV off]

I mean, you could watch it on mute, but then you would miss gems like this.

The Open golf has been on for much of the weekend. I’m not an avid watcher, but it’s been on in the background while I’ve been doing stuff around the house.

This guy is my new favourite golfist. Why? Because of this:

Sounds like me chastising the beagle while doing an impression of Arnold Schwartzenegger.

Fortunately, this Google ad has put me right. 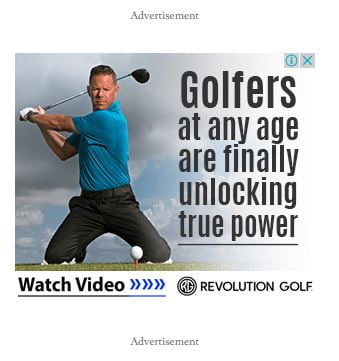 Sadly for them, the image on the advertisement does rather give away the secret for unlocking true power at any age. (But won’t I need shorter clubs?)

And if it works for golf (which it clearly does, looking at all the golfers at any age who are using it on the professional circuit), then I have every hope that it will finally unlock true power on the football field tomorrow evening.

Ooer. Drama at the golf.

And the headline to go with it:

Look, I get it. The player (Kyle Stanley) hit the ball into the crowd and didn’t warn them that it was coming. The lady who got hit with the ball happened to be the mother of the caddie of Stanley’s playing partner that day, Bob MacIntyre.

Golf etiquette dictates that golfers should always yell “fore” upon hitting a shot that carries the risk of hitting another golfer. As long as you yelled “fore,” you did all you could to warn the other golfers. Convey this message to them in as polite a manner as possible.

MacIntyre was irritated that Stanley never warned the spectators that the ball was going their way.

But that’s not quite what the headline says, is it? That word “after” really doesn’t fit very well, because now for me, the suggestion is that Stanley should have gone over to Mrs Caddie Mum, who was by now nursing a very, very sore hand, and shouted “fore” at her. And I mean, there’s no point in doing that once the ball has hit someone, is there? In fact, some might call it ‘adding insult to injury’.

Seriously, if a golfer whose ball had just fractured my metacarpals, then strode purposefully off the fairway, across the rough and over to the gallery (look at me with all my golfing terminology, innit?), I’d be expecting some sort of sympathy or apology, not for him to shout “fore” at me at very close range. I’d likely consider that rather sarcastic, and, given my recent and clearly still very painful injury and subsequent troubled state of mind, I might even swing for him with my remaining good hand.

The subheading doesn’t really clear it up either, does it? It almost makes it sound as though MacIntyre was encouraging Stanley to go and scream “fore” into the face of the injured woman. Which he clearly wasn’t, but you wouldn’t know that by reading that second line.

There’s no point to this post except maybe to point out how weirdly my mind works sometimes. And that if you do play golf, and your ball looks like it’s going to hit someone, warn them before it happens, rather than after. Because that’s the way that warnings work best.

Golf. Sport of Kings. Or is that Polo? Whatever, I’m not a fan of golf.
Golf is dull.

Fans of golf – you know who you are – will tell you that it’s not dull. They’ll tell you about that exciting finish to the Ryder Cup in 2012 or some such, and yes, perhaps for that putt, we all held our collective breaths, at least briefly. But it took us four days of repeated five hour games of golf to get there! Dull.

And then there’s the fact that if you want to play some golf, you basically have to schedule most of a day for it. It’s not an hour’s footy, or a 30 minute run round the block. It’s most of a day.
Ain’t nobody got time for that.

Still, I just think that golf is dull. Brian Micklethwait feels slightly more strongly than that:

I still hate and fear golf.

A little more digging (I clicked a link) reveals that it seems to be the same issue with the length of time the whole process takes that’s the root of his hatred and fearfulness:

I remember once having a go at it, when I was at my expensive public school in the middle of the last century.  I still remember hitting one golf ball really sweetly and deciding, right then and there, that I would never do this again, because if I did, there was a definite danger that golf would take over my entire life.  And I wasn’t having that.

Brian does like cricket though, including test cricket, which for me falls into the same “occasionally a really exciting last few minutes but to be fair it took things an awfully long time to get there” category as golf.

The difference is that cricket has noticed this issue and adapted with one dayers and T20s. Horrible for the purists, but key in saving the sport.
Golf, though? Golf has only just agreed to let women be members at its most famous clubs (although they’re not allowed to change there).

So golf is actually old-fashioned, sexist and dull. And it takes ages.