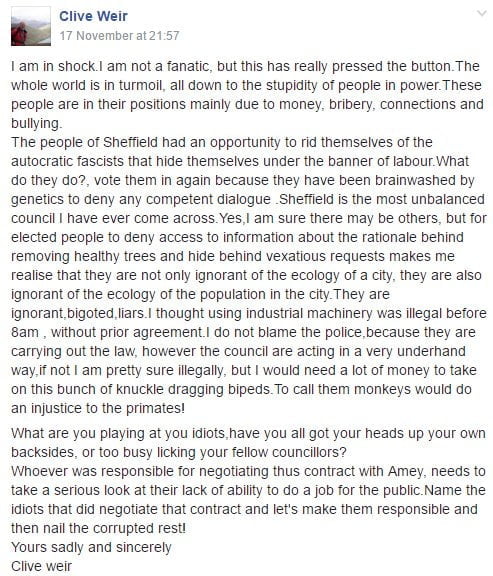 Clive is upset because Sheffield City Council made the decision to cut down some trees in Rustlings Road, Sheffield, despite a long campaign by some residents to keep the trees. The cutting down was done earlier this week, at dawn, by a private contractor – Amey – accompanied by a “massive police presence” (12 officers).
Given the unholy fuss about this seemingly underhand approach, one has to wonder why they went via this route. Perhaps because if they hadn’t, there would have been a riot. I don’t know, I’m just guessing.

Immediately after these sort of allegedly anti-environmental actions (I say ‘allegedly’, because the council are replacing the trees with… er… even more trees than they cut down), local news sites are a great source of amusement. I cut to the chase, and went quote chasing in amongst the looney fringe of the STAG (Sheffield Trees Action Groups) FB page.

I was not disappointed. Non-fanatic Clive Weir’s post was the first one I saw.

The word ‘fanatic’ is defined as:

a zealot, bigot, hothead, militant. Fanatic and zealot both suggest excessive or overweening devotion to a cause or belief. Fanatic further implies unbalanced or obsessive behaviour.

This obviously doesn’t refer to Clive Weir though, because he is not a fanatic. He does seem ‘somewhat disappointed’ with the city councillors though:

The people of Sheffield had an opportunity to rid themselves of the autocratic fascists that hide themselves under the banner of labour.

But wait, Clive. Knowing that they had this opportunity, they surely took it, right? Right?

What do they do?, vote them in again because they have been brainwashed by genetics to deny any competent dialogue .

Seems a reasonable excuse to me. But then I’ve been fortunate to avoid being brainwashed by genetics to deny any competent dialogue.

Or… or have I? [sudden concern]

Although I’ve been a microbiologist since I can remember, I have some knowledge of genetics through my degree in Biomedical Sciences, and I can only imagine that Clive is trying to hint at some sort of genetic brainwashing programme here, selective breeding or eugenics. .

I would need a lot of money to take on this bunch of knuckle dragging bipeds.To call them monkeys would do an injustice to the primates!

And then, the bombshell:

What are you playing at you idiots,have you all got your heads up your own backsides, or too busy licking your fellow councillors?

For those of you who thought that Clive was some sort of fanatic (he’s not), did you get that? These are elected officials, paid to serve the people and they seem to be engaging in contortionism and somewhat iffy-sounding oral practices instead of voting not to cut down trees. Suddenly, Clive’s apparently misplaced anger is wholly understandable. Cutting down a few trees in a posh bit of the city has “pressed the button” and Clive is going to reveal all he knows about the goings-on in the Council Chambers. Already, we know that this includes bending, stretching, recto-cranial insertion and hot colleague-on-colleague tongue action.
Watch this space. Well, that space.

Clive needs to find peace. Mi Riam has him covered:

I can’t help that we’ve been here before, albeit more locally. Perhaps some candles placed in the shape of a fish would work here too.

That rising sun now far more visible thanks to the lack of arboreal obstruction, of course. So every cloud has a silver lining.
And you’ll be able to see them better too. 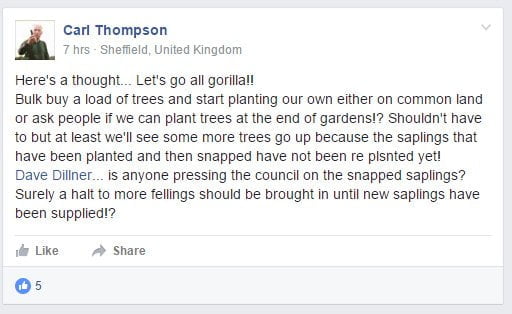 I’m sorry, Carl? Gorilla? As in Gorilla gorilla gorilla? Do they really bulk buy a load of trees and start planting them either on common land or ask people if they can plant trees at the end of gardens?

I mean, I’m no expert on primates (although I now have a little more clarity on how not to insult them) (see above), but I’ve never seen this sort of behaviour on any of David Attenborough’s auspicious documentaries. I have a friend in the DRC – I’ll ask her if she’s had any gorillas come around and enquire about potential arboriculture opportunities.

I’m not promising any return to the entirely non-fanatical STAG page, but it would seem almost foolish not to, given the rich vein of potential blog-fodder on there.

In the meantime, go hug a tree. It might be the last chance you ever get.