So yes, England beat Ukraine and head happily into the quarter finals at Euro 2012 with absolutely no controversy surrounding their passage. Well, except for that perfectly legitimate goal scored by Marko Devic and not given by Hungarian referee Viktor Kassai.

Here’s the screenshot of that moment: 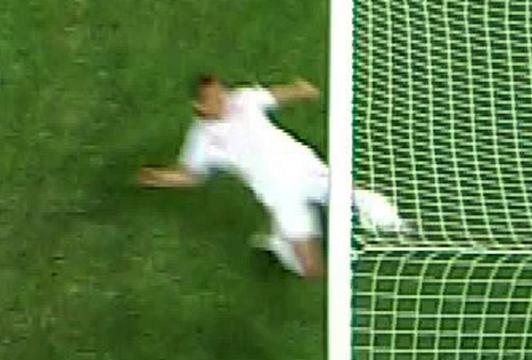 And here’s what Ukraine coach Oleh Volodymyrovych “Oleg” Blokhin said about it:

We scored a clean goal in the 63rd minute, as the ball crossed the goal line by over a metre.

Now, while I have heaps of sympathy with Blokhin and Ukraine (cos remember I have experience of this stuff here and here plus loads of other times I didn’t bother to document), I was unaware of the measurement of a Ukrainian Metre, which appears to be about twenty times smaller than a usual metric metre. Perhaps some hangover from the Soviet Union?

Incidentally, at the same press conference, Blokhin also had a pop at a journalist , saying:

Let’s go outside and have a man conversation.

Presumably, such man conversations involve a great deal of posturing, bravado and comparison of the length of their members; the size of which is something Ukrainian guys are famed for, although it now seems that they may have been measuring in local centimetres, thus diminishing the statue of their claims (and other things) somewhat.

Presumably there’s a Ukrainian Kilometre as well, then? Visitors to that country must think it’s HUGE, when Kiev to second city Kharkiv is listed as 9600km. That’s, like, bigger than Africa (but not if you measure Africa in Ukrainian kilometres, obviously).

But back to reality. Three things to ponder here:

1. Yes. There should be goal line technology in place and only now (that England have been advantaged by it) has Sepp Blatter seemingly woken up to that fact.
2. Were England cheating by having two goalkeepers on the field of play? Sky Sports suggests that yes, they were:

Here’s a Euro 2012 quiz question from the guy who used to do the pub quizzes I attended in the UK:

What links Jakub Blaszczykowski, who scored for Poland yesterday against Russia, with ex-Denmark midfielder Stig Tøfting, who played in Euro 2000?

As a child, Blaszczykowski witnessed a tragedy, which had a major influence on his life. When he was eleven years old, his father stabbed his mother to death.

During the 2002 World Cup, Danish weekly gossip magazine Se & Hør ran a story that Tøfting, when aged 13, had returned home from school to find the bodies of his parents. His mother had been shot by his father, who shortly thereafter turned the gun on himself. The story had been kept secret for years, as Tøfting had not yet told his children.