Here’s the @sheffunilife twitter account. It’s one of those that get passed from person to person each week, allowing for a different perspective of life at Sheffield University:

TUoSEEE being The University of Sheffield Electronic and Electrical Engineering Department.

And his account of some odd electrical noise problems:

Noise issues can cause us real problems with parts of the dept researching very small signals. 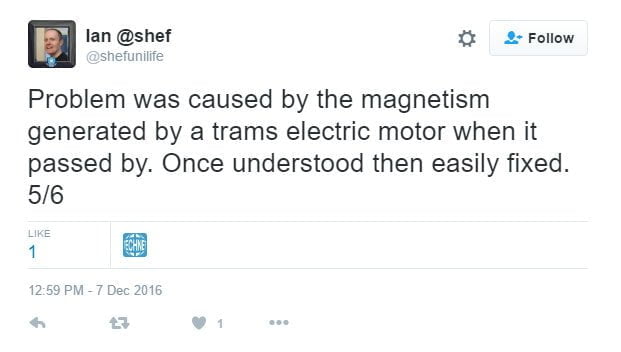 Oops! But beagle-eyed readers will recognise this artifact-based-erroneous-results-in-scientific-experimentation phenomenon from another time… Remember those Peryton Problems, when we were forced to ask: Just where do perytons come from?
Exactly.

Just for reference, we do occasionally get this sort of thing in the microbiology lab as well, but it’s mainly associated with someone sneezing while inoculating a plate.

None of your tram or microwave problems here.

Today’s big news was that I was a big winner of one of the week’s most prestigious awards: The Sour Service Award of the Week on the notoriously controversial Whale Cottage Portfolio Blog. In receiving this honour, I join other luminaries such a Sea Point parking marshall [sic], Coco’s in Hermanus (is that a strip club?), the entire V&A Waterfront, ADT and, in at least one instance, The City of Cape Town.

To be singled out for the difference I have made to Chris’ life has made me very proud.

However, apparently the blog post that I wrote (because I “had nothing better to do”) was “most unprofessional” and displayed “a libelous [sic] ‘journalistic standard'”. It was “riddled with errors”, although apparently the spelling was pretty good, which must have upset her a bit.

Being a proud Yorkshireman and having a devastatingly concise scientific mind, I don’t like making errors. And it is for that reason (and not because “I have nothing better to do”) that I write this post this evening. I want to right the wrongs. I want the truth. I can handle the truth.

Things Chris says I got wrong:

I said that she rents out self-catering accommodation, when actually, they’re B&Bs.
Fair play, Chris – I’ll give you that one. Huge difference between the two, as breakfast is something you can stick another mark-up on and also, you don’t have to buy those annoying mini ovens for the rooms. Well done.

I quoted an eyewitness (in a “maliciously false fabricated  report”, nogal!), but she says that there was no-one close to them.
Well, yes Chris, I did quote “an eyewitness”, but I had the choice of at least 4 eyewitnesses to quote.  One of them took a photo of your car, clamped. Either they were very close to the scene or they have a hell of a zoom lens on their phone.
How do you know that I wasn’t quoting the parking attendant, Chris? After all, he was very close to you, wasn’t he?
Or perhaps there really was no-one there and you were you talking to yourself.
You might want to seek some psychiatric assistance about that, Chris. It’s not normal.

Chris says that I was not at the Convention Centre, and that I admit that I wrote the blog post purely on hearsay.
In alleging this, Chris undermines the entire journalistic profession. Indeed, if we are to use the von Ulmenstein method of reporting, then it means that only those actually present at any given event can mention it.

A great example would have been the news yesterday.
But when asked if  Muammar Gadaffi was dead, the boss at Al-Jazeera didn’t turn round and tell us:

Well, actually, we can’t say, because there were no reporters actually on the scene.
All we have is eyewitness reports. And photos. Pfft – that’s just “hearsay”.
To report that would be irresponsible, and damaging to the reputation of newsrooms generally.

That minor issue aside of course, Chris would never stoop so low as to report on an event at which she wasn’t present, now would she?
N… oh wait… yes – yes, it appears from this typically scathing post on the WDC judges’ visit to Cape Town that she would. Because – and I’m revealing this in an effort to continue the spirit of openness and honesty which has characterised our brief yet fulfilling relationship thus far, Chris – you wrote about a million words (give or take) and expressed some pretty strong opinions about the visit, for which you comprehensively failed make the guest list.

No. I had enough sources, enough evidence. I think that one belongs to me. And that makes it 2-1.

So – now I have reviewed and researched those three alleged errors that “riddled” my “libelous [sic]” blog post and I feel that my conscience is a little clearer, let’s quickly fill you in on the things that Chris didn’t highlight as being falsehoods and which I believe I’m therefore entitled to consider – given her meticulous eye for detail (if not spelling) – that she accepts are correct.

That she parked illegally at the CTICC. If not in a disabled bay, then blocking a fire exit. Well done for not inconveniencing one person and merely potentially endangering everyone in the car park. Top marks.

That she is one of the more unpopular online figures in this city.

That she was singled out in Mandy de Waal’s scathing review of Cape Town food blogs (wherein the description of her included the word “libellous”, but spelled correctly).

That someone set up this site, which alleges all sorts of nasty things about her properties.

That there’s a video showing how “disgustingly dirty” her Franschhoek B&B is.

That her Franschhoek property is ranked 48th out of 49 in the area, based on 30 reviews.

I always wonder in these situations if our online paths will ever cross again. Part of me feels that Chris will, in some way, attempt to even things up. Part of me wonders if she’ll want to risk bothering.

Either way – I’ll be here, hanging around 6000 miles from civilisation…