It’s day 35 of a hard lockdown, ahead of an indefinite period of a further hard lockdown. But what’s coming up is a Level 4 lockdown, rather than a Level 5 lockdown, so there are a few differences.

Minister of Cooperative Governance and Traditional Affairs (I don’t make up the titles, folks) Nkosazana Dlamini-Zuma took centre stage for several hours last night to fill us all in on what that means, and there were a few surprises. (For the record, Trade and Industry Minister Ebrahim Patel was also there, but we were all asleep by the time he did his bit.) 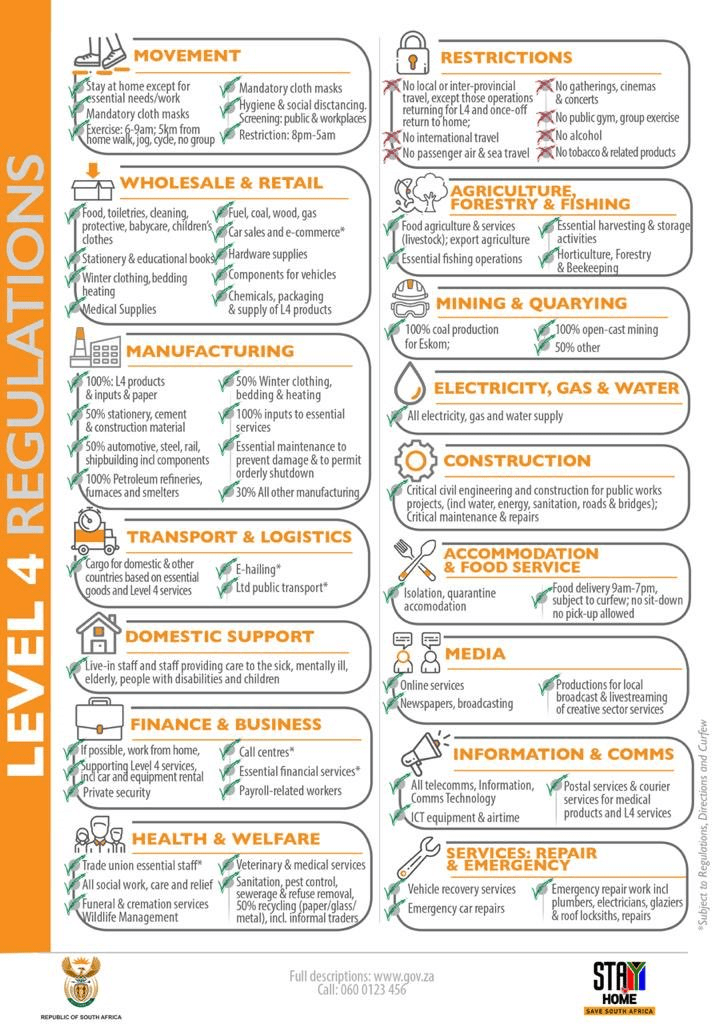 The big surprises were:

Outdoor exercise being allowed – albeit under strict conditions. But I’ll take 6-9am each day within 5km of my home, and
Sale of cigarettes and tobacco not being allowed. This one left a lot of people very, very upset.

The fact is that Covid-19 is a respiratory disease, and smoking does mean that you are potentially more likely to develop the disease if you are infected with the virus. But we were told that there had been “over 2000” submissions in support of keeping the ban on the sale of tobacco products – a ban that was to have been relaxed in Level 4. A couple of points on that: firstly, who were these 2000 people? I’m not a smoker and I don’t like environments where I am exposed to smokers, smoking. But South Africa is generally very good at separating smokers and non-smokers in social environments, and we’re not going to be in social environments for a long, long time anyway. So which 2000 people decided that objecting to people being able to smoke was something they needed to do? And secondly, there was no opposition to those 2000 people’s submissions because it had been documented that tobacco was going to be sold under Level 4, and it’s generally wholly unnecessary to comment/object/support the status quo.

Obviously, there is quite a bit of opposition now.

Next question: What does this mean for alcohol, which is/was due to be sold at Level 3? The logic behind the tobacco sales ban is perhaps a bit “meh”, but there are real tangible benefits for an alcohol sales ban as far as the workload on hospitals goes. So will 2000 people object to that, as well? And will people learn from the tobacco decision and write in to support alcohol sales at Level 3 – and if so, on what grounds? Because “I miss my wine” isn’t going to cut it.

The most concerning announcement was perhaps the curfew: 8pm-5am. Mainly because according to the documentation we’ve seen so far, it appears to remain right down to Level 1, which government themselves has described as:

And which (currently) includes allowing sit-down meals in restaurants. So why do we all need to stay home from 8pm?

Given that Level 1 is likely to continue to be in place until there is widespread vaccination in SA – probably (optimistically) 18 months away at least – will this “new normal” ever go away?

And this as SA recorded its largest rise in infections yet.
And as the Western Cape (and Cape Town in particular), showed worrying signs of becoming a real hotspot for infections.
And as the DBE seem to be planning to send kids back to school.

It just doesn’t add up, at all.
There’s no clear communication, no joined up government and no good news at the moment.