I’m ridiculously excited about this.
An interesting development in the interesting development which is taking place at the bottom of Buitengracht ahead of the World Cup is the addition of cat’s eye traffic signals to the junction with Western Boulevard. These nifty little lights run right the way across the junction, along the painted white line of the lights. When the signal is red, they show red and when the lights change to green, the cat’s eyes switch off, effectively disappearing.

Here’s one of them in action: That’s one just in front of the white line. And on the right is a guy selling newspapers who is already bored of seeing cat’s eyes traffic signals.
This is an especially good junction to launch this new technology in Cape Town, since there are six lanes leading up to these lights, meaning that the traditional traffic signals are pretty sparse.
Which is probably why they put them there.

It’s something that I haven’t heard of anywhere else in the world, although I’m sure to have some Dutch bloke on here saying something along the lines of “Yesh, obwioushlee we have had theesh in Hamshterjam for sheveral yearsh already” or something similar. It just sounds like something that the Netherlands would have thought of first.

Probably the best view of these lights in action is from the pedestrian footbridge spanning the inbound lane of Buitengracht. You know, the bridge that wasn’t actually there last week?

It’s amazing how much positive change the World Cup has brought to Cape Town and its infrastructure already.

EDIT: OK, apparently some people just aren’t getting it. I didn’t think it was so hard, but in order to enlighten the unenlightened and in the interests of road safety, I have been to the 6000 miles… graphic design office and asked them to come up with a diagram for me. 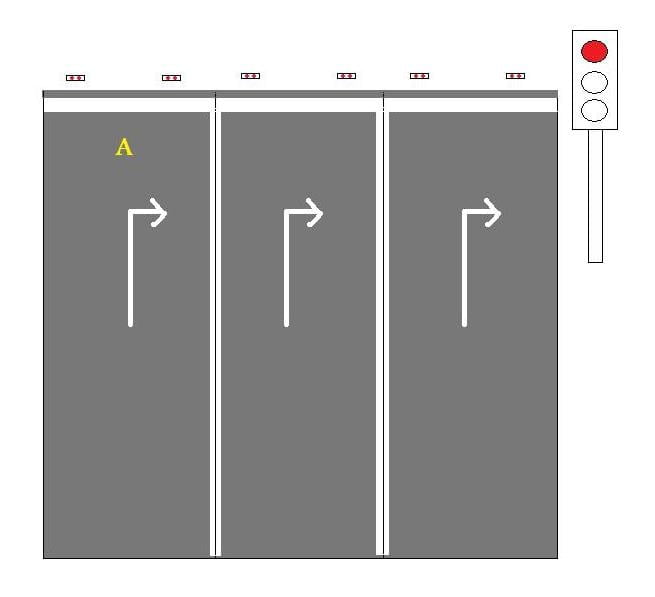 But anyway. Here are three lanes of the junction in question. You’d be in one of these if you were turning right into Western Boulevard.
Now, imagine that you’re in a car in Lane A. Look how far you are from the traditional traffic signal on the right hand side of the road.  Blimey. You might miss that and cause a nasty accident by colliding with another motor vehicle traveling across your intended route.

Fortunately, in the road in front of all of the lanes are the new cat’s eyes. You can see them on the diagram above represented as small rectangles with red dots in. Which is pretty accurate, because that’s actually what they look like IN REAL LIFE!
They are LED cat’s eyes, which mean that they shine whether or not you have your lights on, whether or not it is day or night. And when the traffic lights are set to red, the two sets of cat’s eyes in front of each lane shine bright red too.
When the lights change to green and you are free to go, the cat’s eyes switch off and, because they then become just small discs of flat metal in the road, you don’t see them. Astounding.

Thus, it’s like having road-based traffic lights right the way across the junction, and not just on either side of this (very wide) interchange.