That date in the title just to differentiate this post from a similar one 3 years ago.

Right, let’s get on with this: brief and to the point can like to be my style this morning. (UPDATE from end of post: this didn’t happen, sorry.)

First off, this was a birthday gift for our 9 year old daughter, so standing tickets were out of the question: she’d get really tired and be staring at several or more student bums for 3 hours. So we were sitting right up at the back – a position which has both its advantages (comfy seats, better view, fewer bums) and disadvantages (bit distant from the action, not quite the same atmosphere).

We arrived just in time for the first support act, Opposite The Other. Local boys done good. Not my sort of music, but there’s clearly a great deal of talent here. There was a bit of a dearth of character and stage presence though. But then, this was a first act, playing to a half empty arena some 2½ hours before the main event, and South African audiences are notoriously disrespectful anyway, so I’m not sure that anyone noticed or cared.
I’ll give them a solid 6/10. Not bad, could do better.

But then after their exit, came the MC. I missed his name, but basically he was a late middle aged American gentleman; a balding and somewhat portly chap with zero personality. Good choice for the job. And here let me digress a bit: look, I’m not sure that I could MC a concert. But that’s why I don’t MC concerts. In much the same way, I’m pretty sure I can’t do open heart surgery so I go out of my way to avoid putting myself in situations where I might find myself having to do open heart surgery.

Play to your strengths, innit?

I don’t know much about the MC last night, but I have a feeling that he might be better at open heart surgery than MCing concerts.
It sounded like he was going to be doing the Durban (Friday) and Joburg (Saturday) concerts too. You guys are in for a treat. Eish.

Fortunately, the fun sponge and his monotone verbal stumbling eventually made way for Matthew Mole (who is not actually a mole) (private joke, sorry) and even more fortunately, he was very good. Tight, professional, engaging, and clearly and rightfully proud of what he was doing. One drummer, one synth and varying sizes of strummable instrumentation, plus some well-placed confidence and that voice: a really simple combination which worked really well. Let the music do the talking, as it were. The audience was also more receptive – probably aided by some Castle Lite and some better-known songs – and the performance finished with our temporary protagonist standing on the fence at the front of the crowd and banging a big drum, yielding almost iconic imagery like this (nabbed from his Facebook page): 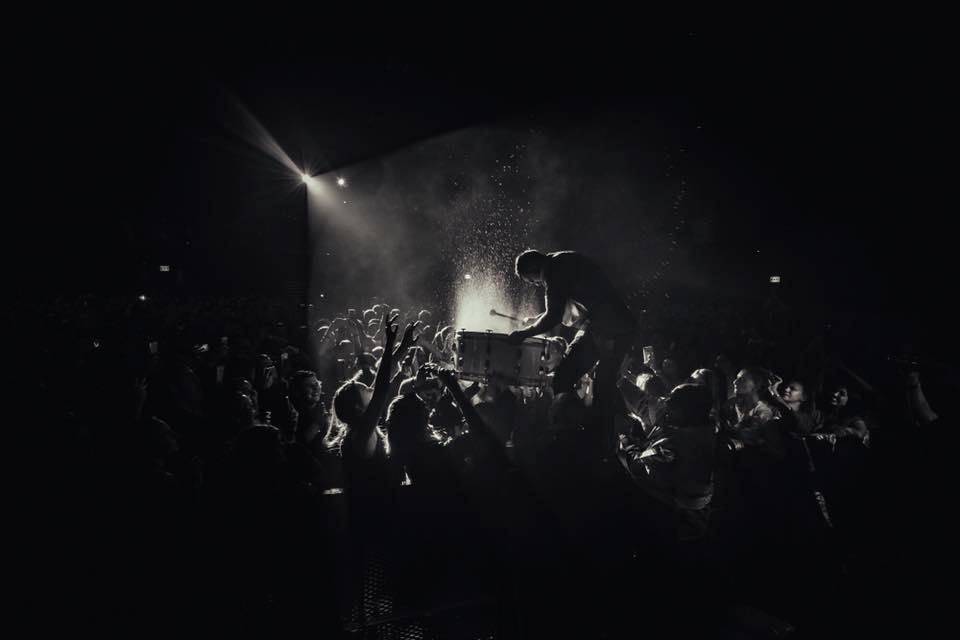 Time for Mr Boring to come on again and try to evaporate any excitement or atmosphere, but amusingly, this  ime around  is  icrophone was ‘t  orking pro erly and so we were spared from much of his “witty” “banter”.

There may actually be a god, after all.

Bastille time. Volume up a notch or two. Lighting up several more. And a huge welcome as the band took to the stage, introduced by a video of their strange newcaster, who resurfaced again and again during the evening. We began with Send Them Off! and from the get go, the huge energy was evident. The familiarity of Laura Palmer – a beautiful, almost orchestral version with soaring strings reminiscent of The Sun Always Shines On TV – really got the crowd going and we were away. Even more so when Dan wandered out into the crowd while performing Flaws. And then memories of Kirstenbosch 3 years ago were stirred as the audience talked right through a beautiful rendition of Overjoyed. You rude bastards. All of you.

A good setlist of stuff followed with songs from Bad Blood and Wild World cleverly combined to not stray too far from the familiar, nor lose the energy while also showcasing their slower “massively depressing” (Dan’s words, not mine) music.

We got an emotional Durban Skies dedicated to Dan’s family (and notably only ever performed live in SA) and then an acoustic Two Evils from the balcony just down in front of us, before a really weird ending to the set, with Things We Lost To The Fire and then Pompei and then… nothing. Even though the newsreader on the big screen told us “That’s all!”, it took the house lights coming up and the roadies dismantling the drum kit before the rather confused audience started to leave.

But this oddity aside, it was a brilliant performance. Energetic, loud, entertaining and captivating. And all so hugely professional. Really amazing. About 20 songs, about 90 minutes on stage. Great value for money. They’ll be joining Matthew on a high quality 9½. (Don’t be sad. I don’t give out 10s easily.)

Oh, and before we go: a shout out to Grand West. They really do do concerts well there. Extra exits, well lit temporary pathways to the car park, helpful staff, prepaid parking tickets, brilliant traffic control. Each bit saves just a few seconds, but add that up across 7,000 strong crowd and it makes a big difference. There’s a lot that other venues could learn from them.