Great title, long post, entirely written by someone else and for which I make no apologies for sharing in full here because (amazingly) not everyone has access to Facebook.

Back story: On 10th October 2017, Durban was hit by a cut-off low, bringing deadly winds, rain and flooding to the city and surroundings. During that storm, a container ship – the MSC Ines – drifted, blocking access in and out of Durban harbour: 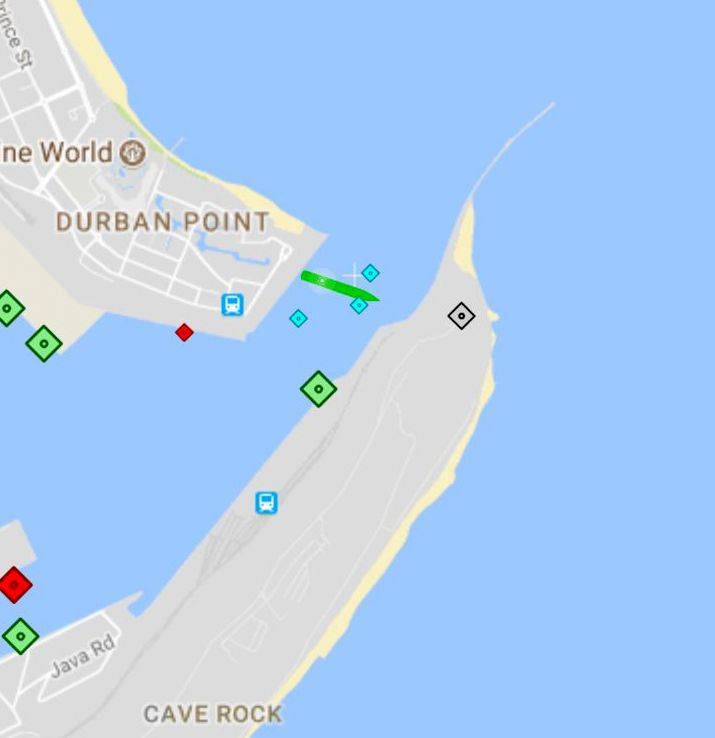 And that’s where this story begins:

“Early last week, reports started to roll in that 100’s of millions of little round, half-moon shaped plastic “pellets” had begun washing up on beaches around Durban.
Within days it was evident that this was only the very tip of the iceberg and that the province’s marine life was under threat from Amanzimtoti and Umkomaas, right through to Richards Bay.
Towards the end of last week, SAAMBR (South African Association for Marine Biological Research) sent out an urgent appeal for all beach-goers to try and assist in collecting as many of these nurdles as possible over the weekend.
This call was echoed by numerous other organisations involved with marine conservation and beach clean-up projects.

According to SAAMBR, the pellets will very easily make their way into the food chain of many marine species, who could easily mistake the tiny pellets for eggs or similar food.

But that wasn’t the worst news. According to SAAMBR, the real danger is that these nurdles, which are a raw plastic material which gets re-melted and moulded in factories to make plastic products, can and do absorb pollutants like PCBs and organochlorine pesticides, which are highly toxic to marine life and humans if consumed.

Fundamentally, we have an enormous ecological disaster on our hands, which could easily be compared to an oil spill in terms of its possible impact on our marine species, not to mention the effects this could have on humans who may be consuming toxic fish a little further on down the road.

Most if not all the news articles on the issue so far have hinted or suggested that the nurdle spill occurred when a container fell from a ship during the extreme weather experienced along the KZN coast on the 10th of October, but nobody has yet been able to pinpoint the origin of these toxic nurdles, and stranger yet, nobody seems to have come forward to claim responsibility, even though it has now come to light that this spill will have a hugely detrimental impact on the marine environment, the full effects of which won’t be seen for some time.

Until this point, it has fallen to volunteers and willing beach users to try and collect these toxic pellets, and nobody from government or any toxic spill management company has bothered to do anything.

Salt Fishing South Africa, we believe, may have some insight as to the origin of these nurdles, and we have a whole host of questions we would like answered by the Durban Port Authority, the Durban Municipality, local government and the shipping company involved. And possibly, we would like a response from the insurance company of the shipping company and even of the company responsible for importing these products.

We have come into possession of a series of photographs that seem to very firmly suggest the origin of these pellets, and that had the situation been properly managed, the destructive effects of this spill, could have been significantly minimised.

Everyone will surely remember the dramatic image of the MSC Ines that, on the day of the storm, ran aground across the harbour mouth, and was completely blocking the port entrance.
Well, we have learned that when the port’s tugboats finally managed to drag the ship free, it’s run of bad luck was far from over. In fact, as the tugs towed it towards its mooring, it once again broke free, due to strong wind, and was pushed into another ship, the Maersk Vallvick, that was already moored at D mooring on the point terminal. This caused some serious damage to the Vallvick which was crushed between the heavy container ship and the quayside. 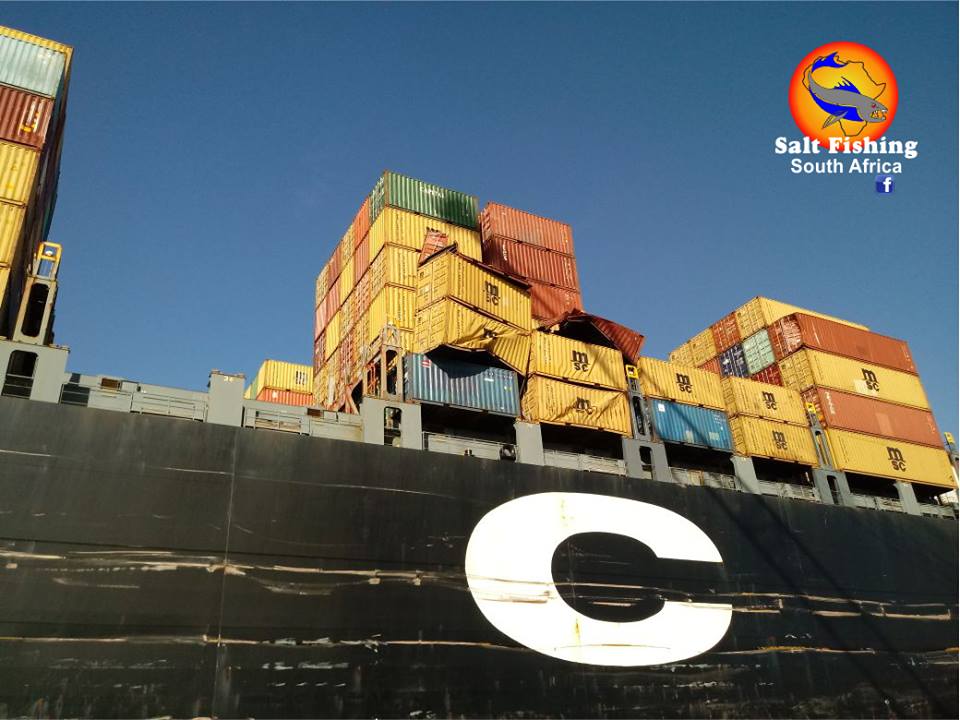 It was at this point that the environmental catastrophe began. As the MSC Ines crashed into the Maersk Vallvick, the Vallvick’s accommodation area tore open and damaged a number of containers on the Ines, sending at least one severely ruptured container (container number TGHU 923667-4), overboard and into the harbour waters.

From what we have learned, it was only at around 12 midday the following day that the port authorities realised that there was a damaged container in the water and only hours later was it removed by crane. In other words, at least one ruptured container, leaking these plastic nurdles, was in the harbour for almost 24 hours. 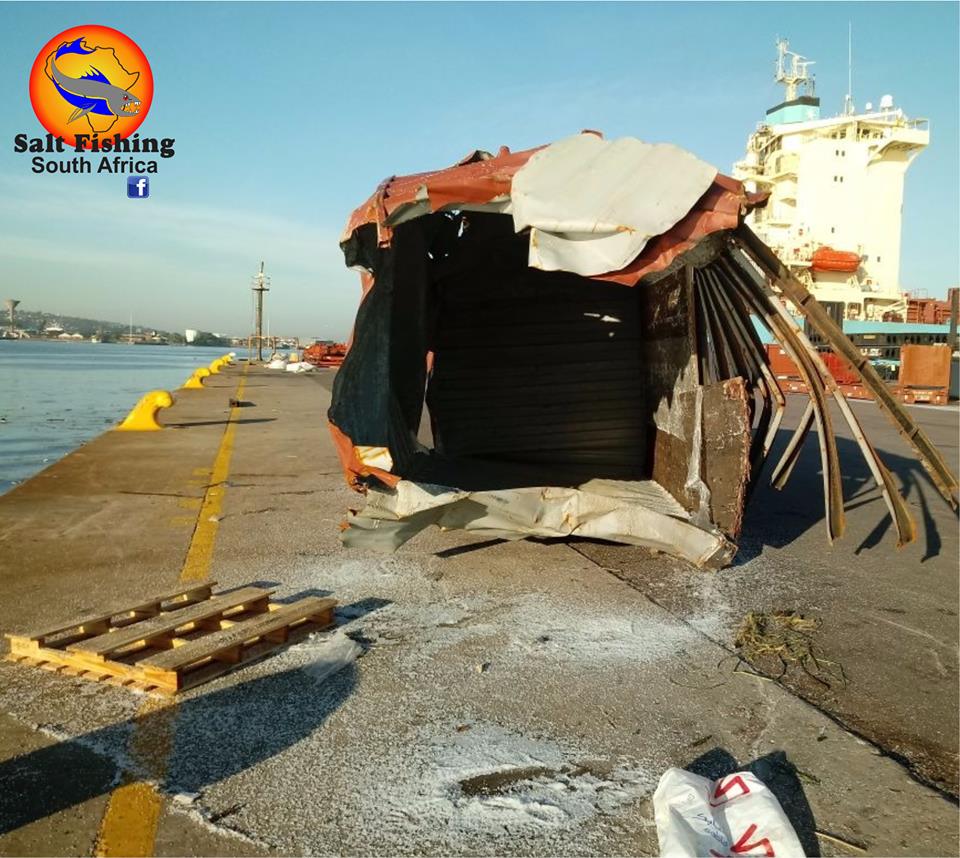 Today, almost 2 weeks after the storm, the remains of the damaged container and its cargo are still standing on the pier and the nearby railway tracks are littered with the plastic nurdles, still being blown into the ocean to further contaminate our shoreline.

And now our questions –

Why, when the damaged container was discovered in the harbour, why wasn’t a full-scale clean-up organised by the authorities, while the pollution was still contained in the harbour?

Why, when it was obvious that tons of these plastic pellets were being blown out to see for days, was nothing done at that stage?
These pellets don’t sink, as can be seen from the photos, and millions of them were blown up against the quays, where it would have been fairly simple to scoop them out.

Why, since the incident has made national news, has there still been no statement from the Port Authority about what happened and how they intend to deal with the consequences.

Why has nothing come from the owners of the MSC Ines? Surely the owners are aware of what these containers were loaded with and would know the sort of environmental damage this sort of spill would mean?
And surely they would have had to make a full report to their insurance company?

Why have we heard nothing from the Durban municipality on their plan to clean the city’s beaches? (Are we once again left with the same situation that happens every single summer when the Umgeni River floods and brings hundreds of tons of plastic rubbish and pollution into the river, from where it washes up onto the cities beaches and is often left for days, even weeks before being picked up, more-often-than-not, by public volunteers.)

Why, when it has become very evident that these tons and tons of plastic pellets have made their way up as far as Mtunzini and Richards Bay, covering almost 200 km of coastline, has Provincial Government not said anything. The province was declared a disaster area days after the storm. Why has Provincial Government not included some strategy to minimise the impact of this spill, in their disaster recovery plans.

WHY has it thus far fallen to the public to try and remedy the situation? There is absolutely no way that a few volunteers, no matter how passionate about keeping our beaches clean, can ever have any significant impact on a problem this massive.

Just to give you an idea, these nurdles come packed in 25 kg bags, (something to bear in mind when looking at them in the photos, floating in the harbour water, where they look deceptively small,) and the damaged container recovered from the water was a 6 m container, it could easily have had over 800 bags or about 20 tons worth inside.

This is an environmental emergency. In most other developed nations, this would receive emergency attention and swift support from government. Two weeks after the spill the public are the only ones expected to tackle a herculean task. Somebody needs to be held accountable and someone in our government needs to take this situation on urgently and come up with a strategy to do as much as possible at this late stage to minimise the impact of this spill.

And even though it may be too late to do very much this time, a serious lesson needs to be learned from this, and steps and measures put in place to ensure that if something like this occurs again, it gets top priority from the harbour authorities and isn’t ignored until some concerned member of the public has the courage to do or say something about it. This is not the public’s fault and it shouldn’t be left to us to sort it out!

Both damaged ships are still in the port, with the Maersk Vallvick currently in dry dock, presumably undergoing repairs.

The final photograph shows 2 pallets of the 25 kg bags of nurdles, seemingly all that was recovered by the clean-up crew.”