Apparently, it’s a thing. Young band bursts through, full of promise and innovation, releases a fantastic debut album to widespread acclaim and sales and then has to follow it up with something equally good to show that they are more than just a flash in the pan.

Back in late 1986, a-ha faced this hurdle – having given us a debut album which spawned 4 top 10 hits – and thirty years ago today (thirty…!) they released Scoundrel Days. 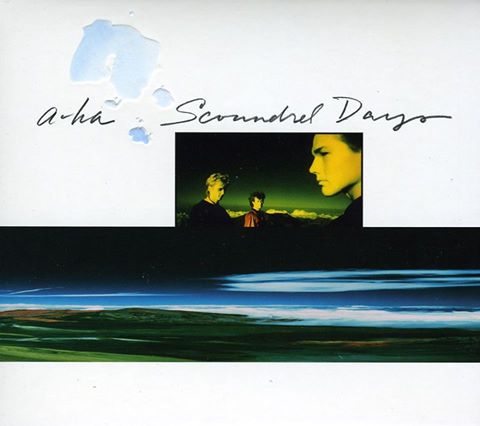 Despite enjoying what had gone before – and the eight studio albums which have followed since – Scoundrel Days remains my favourite a-ha album, and with that, my favourite album. In fact the eponymous single is my favourite a-ha track. The power of Morten’s voice in the chorus is spine-tinglingly good.

The album sold over 6 million copies worldwide (c.f. 7.8 million for Hunting High And Low) and gave us three singles: I’ve Been Losing You (in which the protagonist expresses a certain amount of regret over murdering his partner), Cry Wolf (in which the band repeatedly insist, somewhat prophetically, that the time to worry is “now”) and the ever-beautiful Manhattan Skyline (in which our star gently describes the blustery scene juxtaposed with his wiild frustration as he leaves his lover during a storm, and which features a fantastic Roland Juno-60/106 synth intro).

Oh, and there was the strange case of Magne’s Maybe, Maybe featuring lines such as:

Maybe it was over when you chucked me out the Rover at full speed.

The doubt in his statement here was probably caused by the fact that in 1986, full speed in a Rover was virtually unattainable because they were usually found broken down at the side of a road.

Maybe, Maybe was released as a single, but only in Bolivia.
It failed to chart. A lesson there for us all, I feel.

I remember reading a review of the album in Smash Hits in October 1986, and being disheartened as they predicted the end of the band, proclaiming that anyone coming up with stuff like:

One left low left two who left high: they seem so hard to find.

Three came twice took once the time to search.

was probably on their way out. And at the time, it seemed a reasonable assertion to be honest, but the album was so good, I bought the CD to go with my cassette tape version – before I even had a CD player.
This was advanced technology, hey?

And yes, I still have the CD. Finding a CD player to play it on is difficult for entirely different reasons now though.

2 thoughts on “The difficult second album”