If you’re a regular reader here, then you know about me and religion.

I don’t do it, but I happily accept that some people do do it and that’s just fine. Really, as long as it’s not affecting my life and it’s not doing anyone any harm, then as far as I’m concerned, you can pray away to whichever deity you so desire. It’s really none of my business.

Talking of none of my business though, the top five guys in the Anglican church in the UK (presumably, they’re actually second in commands after you-know-who) decided to write a letter to the Financial Times today – about the UK Internal Market Bill.

Now, I recognise that they’re absolutely entitled to do that. So I’m not saying that they shouldn’t do it. I’m saying that I’d rather that they didn’t do it. My feeling is that they should have their views noted and then we should move on. Whatever their standing within the church, publicly criticising political and economic decisions is surely not their job.

I know I said that, in my mind, religious individuals should be allowed to do whatever they want within their own circles (notwithstanding the couple of points I made above), but this intrusion out of their lane irritated me. More so because there would be righteous outrage if the tables were turned and politicians started remarking upon and apparently trying to sway decisions made by the church.

This individual on twitter has put that very succinctly in his second sentence, I feel. 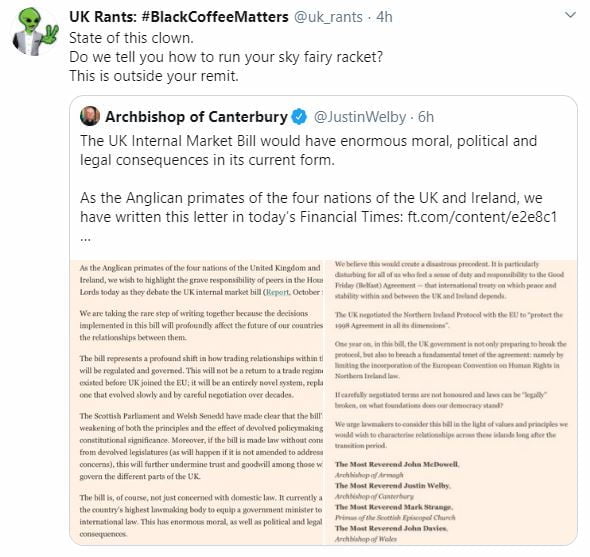 Indeed. Let the elected politicians get on with their work and you get on with yours. It’s not like you don’t have problems of your own that you really need to be working on.

Thus, without want to ironically cross those same boundaries, might I just quote Matthew 7:3-5?

OK, there’s plenty of time and opportunity to remove both plank and speck, I know.

But yeah, like Matthew says, maybe start with the plank.