Petrol is going up again next month and people are understandably searching for alternatives.

Look, electric cars are great. Some of them are even really cool. We saw loads of them in Bergen, each with the number plate prefix ‘EL‘ to signify the green credentials of both the vehicle and owner. And that’s not unusual for Norway. Check this article from 2 years ago:

Norway, with a population of only five million, now has on its roads 35,000 electric vehicles (EVs), which also represent 14.5 per cent of new vehicle sales. Figures show another spike last month with 1,346 sales.

Onward and upward. What nice people, concerned about CO2, the greenhouse effect and climate change. But hang on, it seems that the electric car boom is driven by tax breaks, subsidies and privileges, rather than altruistic environmentalism:

Those benefits are incredibly generous, including exemption for VAT and car tax as well as access to bus lanes, free parking, free toll-road use, free ferries and employment tax benefits. A recent study suggested this equals as much as £1,000 a year in savings over the life of an EV.

Never mind. A by-product of this apparent greed is fewer car fumes in the city. Winning all round. 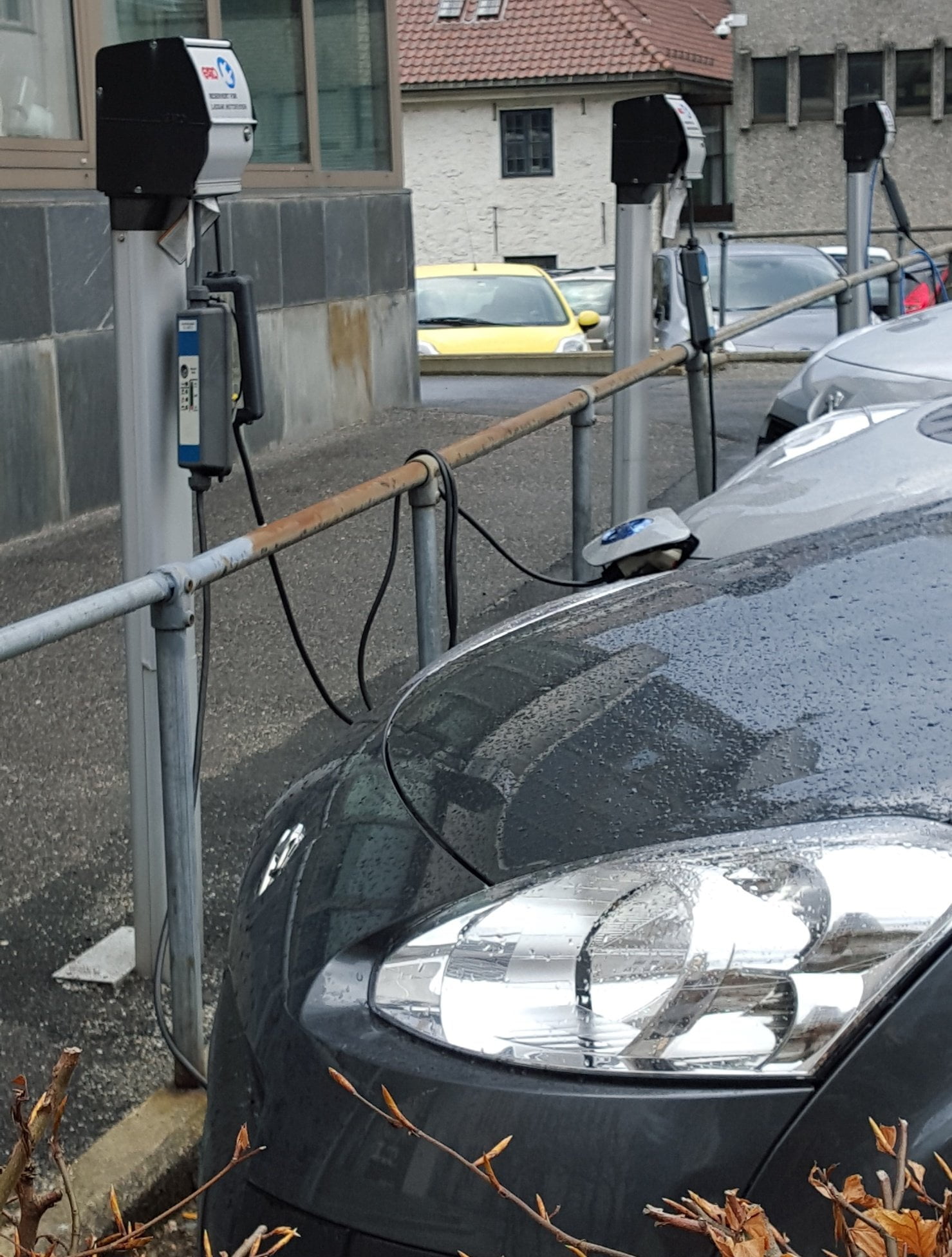 EVs plugged in at the Bergen rådhus

In South Africa, we don’t have enough water or big mountains to work this way. We do have shedloads of fossil fuels though, so we make our electricity by burning those. Thus, following the electrical supply audit trail upwards, when you plug in your EV in Cape Town (and good luck with finding somewhere to do that, by the way), it’s basically running on coal, like an old steam engine. Filthy.
So, right now, there’s really no environmental benefit to driving an EV in South Africa.

There is some evidence that people don’t think past what’s immediately in front of them though. Look at these guys, for example: Scootours. Now, this looks like a very, very cool idea, and one that I am determined to try. But their claim that it’s green? Well…

Yes. Going down a hill “propelled by gravity” is environmentally neutral. Well done.
But that vehicle taking you to the top of the runs? Fossil fuels, mate. And the laws of Conservation of Energy mean that the whole uphill thing will be especially dirty, heading up Kloof Nek and generating all that potential energy for you and your huge scooter.

I suppose that the thing with electric cars is that you would need to measure the amount of damage that burning petrol is doing versus the coal to make the electricity for your EV. But that difference is likely to be minimal. There was the option of buying clean power by subsiding the 4 wind turbines near Darling, darling, but they proved to be so inefficient that the company went bust.

Darling Wind Farm was one of the first two wind farms in South Africa. It is located 70 km (43mi) north of Cape Town, between Darling and Yzerfontein on the west coast of South Africa. It is an Department of Energy demonstrator site with the 4 turbines constructed. The second phase, 6 additional turbines, was never completed.

Darling Wind Power company is subject to liquidation. The DWP Board adopted a resolution to liquidate the company. Expected to operate at 28% capacity and deliver 13.2 GWh per year, it has only been delivering 8 GWh per year at 19% capacity.

OK. Once we get our clean electricity sorted (hello nuclear) and the price of cars with big batteries comes down to at least reasonable levels, we can revisit the electric car in South Africa. But these things aren’t going to happen before petrol goes up by a Rand per litre in a fortnight’s time.

And so that’s why you need to try out our massively efficient public transport system [cue laughter] or start walking.