Aside from the rubbish commentary and scandalous supposition around Michelle Obama’s alleged jealousy in that picture from the Nelson Mandela Memorial Ceremony at the FNB Stadium yesterday, something else irked me about the whole situation with Obama, Cameron and Ms Thorning-Schmidt. Something bigger. And I’m not alone: Iain Martin feels the same way.

David Cameron is a well brought up son of the English shires. He knows, I suspect, not to talk too loudly in church, not to help himself to the claret when invited to a dinner party and not to be rude to waiters or waitresses. He can be a bit presumptuous and thoughtless with his own MPs, which may one day have consequences. But that aside, he knows how to behave.

So why did a grinning Prime Minister today lean in to be in a “selfie” with President Obama and the leader of Denmark? She’s Neil Kinnock’s daughter-in-law, by the way. A dignified Michelle Obama looked straight ahead and refused to indulge in such ridiculous teenage antics at what, after all, was a memorial service for Nelson Mandela.

He’s right. It was juvenile behaviour, it was undignified, disrespectful and wholly inappropriate. 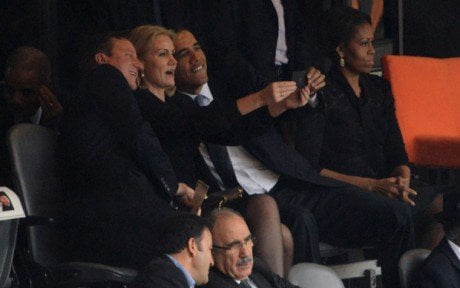 There will be those who would say that Mandela would have loved their spontaneity, their smiles and the indication that they are human, after all. Others may argue that the whole ceremony was a bit of a shambles anyway, so what difference does it make?

Neither of these is any sort of excuse though. The point is that these individuals were representing their respective countries at one of the biggest single events we’ve ever seen. These are adults. Elected individuals in positions of responsibility and power. And they’re not at a cocktail party, are they? I couldn’t believe it, and neither could Iain:

What on earth is going on? Why do world leaders now behave like this? And at a memorial service?

Perhaps it is just that the current generation – my generation – is so appallingly spoiled that basic notions of decorum have been shot to pieces. The materialistic search for self-gratification trumps all. Why let a fuddy-duddy thing like manners get in the way of a social media opportunity, where we can put ourselves at the centre of everything, clowning around like muppets watching a Lady Gaga concert, grinning at the camera and then tweeting the results?

The worst bit of the whole thing is that the rest of the ceremony was so appalling that now this “Selfie-gate” is the only thing the world is talking about from yesterday. South Africans are talking about JZ being roundly booed (like he cares what the public think), but that’s of little interest outside these borders. And so rather than recalling a celebration in memory of a great man, yesterday will be remembered mostly for Dave, Helle and Barrack grinning into a cellphone camera.

The sadness is that Cameron is good abroad. I for one have never looked at images of him on a trip and felt embarrassed or baffled by his behaviour… But I saw that selfie picture and my response was simple and from the gut: what the hell do you think you’re doing man? Whatever it is stop it.

Yes. Exactly. What an embarrassment.