Busy day, busy evening ahead, so just a quick recommendation which I recently found on The Twitter:

Fragments of life in real messages on postcards from the past. Delivered to you every day. Wish you were here?

It does exactly what it says on the tin. The fragments of life come as single line quotes from the postcards in question and range from the rather mundane, through to the altogether intriguing, and include several of the bewildering and bizarre. Of course, many of these snippets can be attributed to the actual holiday experience, but then there are some that provoke further interrogation. 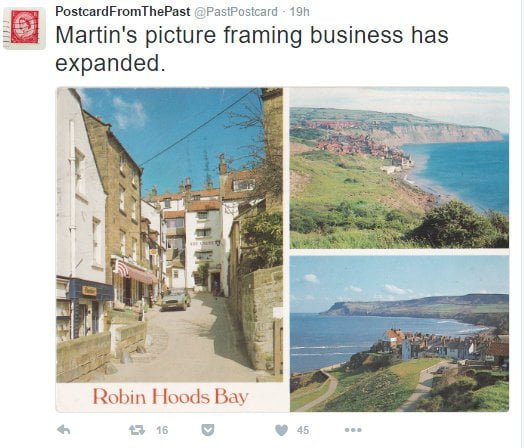 If you’re in the right mood, you can become quite involved. Who is Martin, how big is his picture framing business now (clue: it’s bigger than before), and what does that have to do with a visit to Robin Hood’s Bay?

When was the last time you sent a postcard?
With WhatsApp, email and Facebook, postcards are surely dying the death, aren’t they?
Discuss [5 marks]

As I said – just a quick recommendation today, but do go along and have a look.