Previously, my email inbox looked fairly normal. Some family stuff, a Superbru reminder or two, a bit of hate mail from some Afrikaners about something I wrote on Steve Hofmeyr in 2007. Nothing particularly unusual there.

Now, however, my email inbox seems to have emails about beagles in it. Often. And some of those emails look like this: 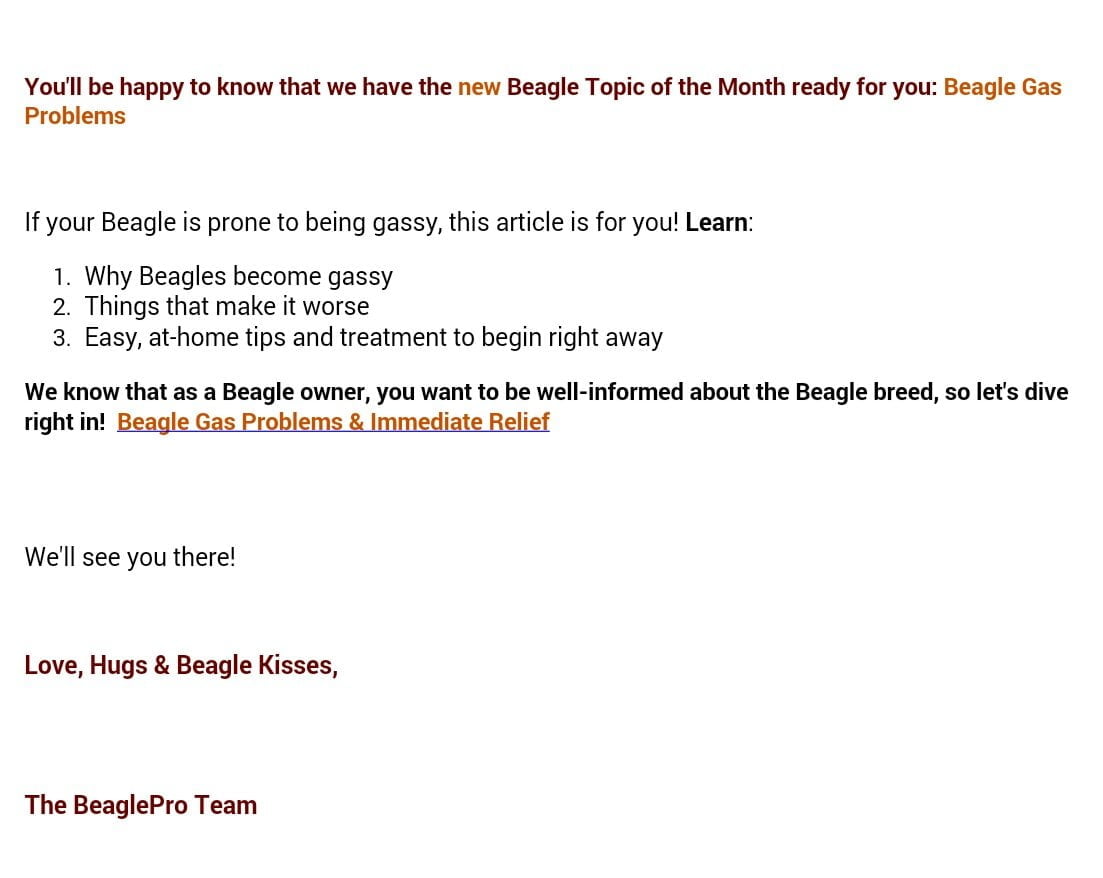 Lovely. And WTF is a BeagleKiss? Eww.

It turns out that Beaglegas is yet another drawback of dog ownership. I don’t know if it is any worse than Spanielgas or Poodlegas, but it’s far from the pleasant end of the scale when all you want to do is chill out in front of a game of footy on the TV. There are two main reasons why Beaglegas is more dangerous than the mustard gas used during the First World War: firstly, because it’s unexpected – you’re not on some godforsaken battlefield in the middle of Belgium, you’re on your couch watching an Everton Europa Cup game – and secondly, because it’s colourless, meaning that there is no visual warning of its impending arrival at the gates of your respiratory system.

In addition, there is no incoming shell here: the method of delivery can be as innocuous as a dozing puppy. In fact, I’m rapidly learning that there’s actually nothing innocuous about a dozing puppy at all. Those moments when the dog is calm, and everything (including its back door musculature) is relaxed, are the moments of most danger. But that’s not to say that you are safe from Beaglegas attack during the dog’s waking hours either. Earlier this week, I inadvertently trapped Beaglegas in the kids’ school lunch boxes after an early morning run-by attack in the kitchen. Not nice for anyone. And it dissolved their cheese rolls.

There are several hints and tips available via that BeaglePro email, hints and tips which one can employ to reduce the incidence of Beaglegas. They’re most likely tried and tested by other Beaglegas sufferers and would probably work in reducing the incidence of Beaglegas in your proximity at any given time. However, I can (quite easily) recall a time when there was absolutely zero Beaglegas in my home. That was fewer than two months ago and those were magical, fresher times; times where one could happily breathe deeply, confident in the knowledge that it was going to be nitrogen and oxygen making up the bulk of your inhalation, rather than the manifestation of Satan in aeriform.

In fact, the only individual in our house who seems wholly immune to Beaglegas is Colin. This is strange. Given that Colin’s sense of smell is allegedly somewhere between 20,000 and 50,000 times (depending on which book you read) more sensitive than ours, it should, by rights, have between 20,000 and 50,000 times more effect on her. It should be instantly fatal. Very fatal. In fact, given those astonishing olfactory comparisons, it wouldn’t surprise me – upon exposure to Beaglegas – if Colin was immediately vapourised and she was erased from photos of herself with the family, like Marty McFly in Back To The Future. And Michael J Fox just messed with the passage of time, he sensibly steered well clear of anything as serious as Beaglegas. Lest we forget, when given the alternative methods of powering the infamous DeLorean, he and Doc Brown took one sniff at Beaglegas and opted instead for plutonium stolen from a heavily-armed Libyan terrorist group.

And suddenly, I’m in two minds as to whether to publish this post. I need to express my suffering, yes. I require your sympathy and I need other sufferers to understand that they’re not alone. But it concerns me that some terrorist group might read this, have a lightbulb moment and understand the gravitas and power of Beaglegas. They would then get some beagles and completely ignore all the BeaglePro advice in order to produce and harvest vast volumes of BeagleGas before launching a terror attack that would make 9/11 look like a unfortunate incident in a Lego factory.

But then I figure that they could just Google for “most evil things on earth” and somehow find themselves at a page which at least mentions the rectal emissions of tri-colour hounds.
I can’t be the only one who has found cause to write about this heinous compound. Or maybe I am the only one who has managed to put pixels to paper before inevitable asphyxiation.