Let’s take a step back for just  a moment here though. And let’s consider Ebola, which is something else that kills you a lot. The (probably a little underestimated) figures for the 2014 (but still ongoing) West Africa Ebola epidemic suggest that 11,000 people died. That’s pretty awful. But it pales into some sort of disgraceful insignificance when you compare it with the 200,000 people who die from typhoid each year.

Typhoid is indisputably nasty. That said, it’s different from Ebola in that while it’s much more widespread, the mortality rates are not quite as high. And a lot of that is probably down to the fact that it’s caused by a bacterium (it’s called Salmonella typhi and yes, it’s related to the food poisoning bug that you get from not cooking your chicken enough) and not by a virus. As any fule kno, bacterial diseases can be treated with antibiotics, killing the bugs and making the person remain alive. Good news for typhoid sufferers.

That is, until now. 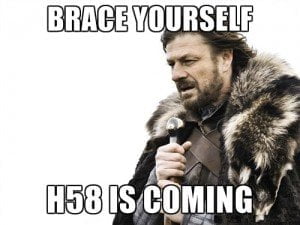 Because a new strain of Salmonella typhi is here: Salmonella typhi H58. And H58 is resistant to antibiotics like ciprofloxacin and azithromycin – drugs that people use to treat typhoid. According to the Guardian:

An international team of researchers analysed the DNA of nearly 2000 typhoid pathogens from countries across Asia and Africa and found that a single multiple- drug resistant strain had swept through Asia and crossed into Africa over the past 30 years.
Nearly half of the organisms studied belonged to the resistant strain, called H58, which has steadily pushed out older strains that are susceptible to common antibiotics people buy over the counter or take to protect themselves from the disease.

And H58 is rapidly becoming the dominant strain of S.typhi, easily pushing the other, lesser, more antibiotic-susceptible, more treatable, less deadly strains out of the way:

In some regions, H58 is displacing strains that have been established for hundreds of years: “We were all amazed at what we saw. When you see the data, it’s pretty stark. It’s very convincing that it’s becoming the dominant strain,” said Gordon Dougan, a senior researcher at the Sanger Institute near Cambridge.
“This beast can get into a new area and it’s at an advantage, because a lot of competition is wiped out by antibiotics.”

The global spread of the strain requires “urgent international attention,” the scientists write in the report. “This is killing 200,000 people a year and no one is really noticing,” said Nick Feasey, a co-author on the study at Liverpool Tropical School of Tropical Diseases.

So – a time for action then? I doubt it. I’ve been telling you all for ages that we’re all going to die horrible deaths at the (metaphorical) hands of drug-resistant bacteria, and no-one has done a damn thing about it.

One of the reasons for this continued lack of decisive action against the spread of antibiotic resistance is that it’s an insidious thing; there’s been no one defining event – no instant train smash – to draw attention to it. Sadly, with the destruction of infrastructure in Nepal – where H58 is prevalent – after the recent earthquakes, we might well see a big spike in the number of cases, which may stick it into the global spotlight until the next plane crash, court case or contentious political statement.

All of which are obviously far more important.

UPDATE: Finally, someone is listening…