As a microbiologist, I’m very much against the beagle licking my face.
I don’t allow it. You simply don’t know where that tongue has just been. 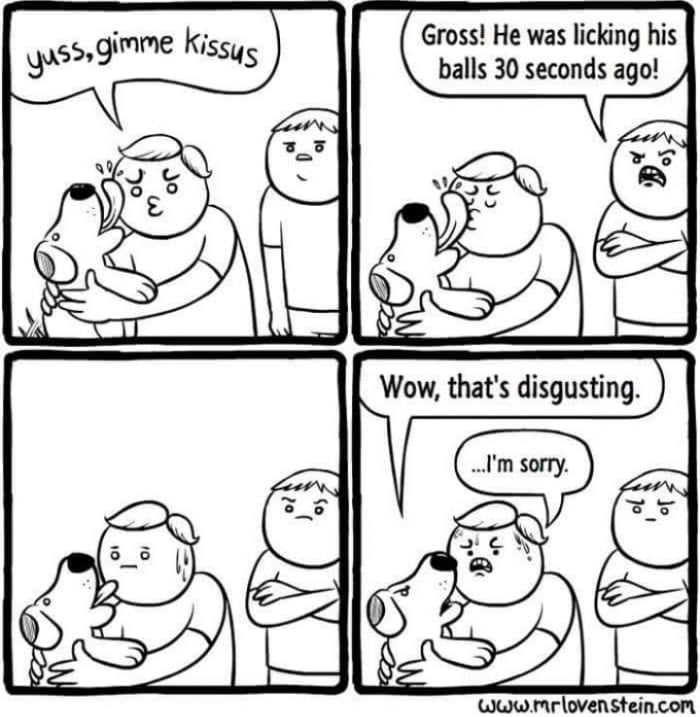 And so that’s just another of the many, many reasons that the above situation could (thankfully) never occur Chez 6000…

And before you ask further household/canine hygiene based questions:

1. Lots and lots of hand-washing.
2. No. Not in the bedrooms.
3. No. There’s no point in having the 5-second rule, because:
a) It’s based on crappy science, and
b) The beagle eats anything that gets dropped on the floor within 5 seconds anyway.
4. No. Of course I can’t reach them. It’s just a cartoon. Jesus.

All good? Great. Happy to have been of assistance.

This piece by Ed Yong in aeon magazine is beautifully written and will make you think about how we, as humans, view our world in an arrogantly anthropocentric manner.

Humans tend to believe that the bacteria that cause us illness and disease do so because that is their sole aim in life. But actually, that’s not how it works. Ed rightly points out that the mechanisms these “germs” employ in order to infect us are actually the results of a process of evolutionary coincidence, rather than any specific design to aid their selection of Homo sapiens as a target organism.

The adaptations that allow bacteria, fungi and other pathogens to cause us harm can easily evolve outside the context of human disease. They are part of a microbial narrative that affects us, and can even kill us, but that isn’t about us. This concept is known as the coincidental evolution hypothesis or, as the Emory University microbiologist Bruce Levin described it in 2008, the ‘shit happens’ hypothesis.

Yes, that fact that these bugs can cause us infection actually has nothing to do with them actually causing us infection. It’s simply that evolution has coincidentally given them the tools to infect us. Take humans out of the equation completely, and these bacteria would remain the same genetically; it’s not we that are influencing them, it’s just our anthropocentric thinking that makes us believe we must be the driving force at play.

Its virulence – its ability to cause disease – is not an adaptation against its host. It is a side effect, a fluke. It kills through coincidence.

This theory also extends to antibiotic resistance. It’s important to remember that most antibiotics were not invented, rather they were discovered. And microorganisms have been using them against each other for hundreds of thousands of years already. The genes which allow bacteria to become resistant to antibiotics aren’t anything new. They’ve been there all along. Our overuse of the drugs is merely propagating the (more rapid) spread of these genes, something which is going to cause us all sorts of problems in the very near future.

In fact, most bacteria wouldn’t even notice if we weren’t around. They’d get on with their daily lives, simply interacting with everything and anything around them:

The most important parts of a microbe’s world are, after all, other microbes. They’ve been dealing with each other for billions of years before we came along.

So actually, we’d do well to note that we’re nowhere near as important as we might imagine.
As Ed says:

We’re not central actors in the dramas that affect our lives. We’re not even bit players. We are just passers-by, walking outside the theatre and getting hit by flying props.