We headed out to Joostenbergvlakte (halfway to Paarl) this afternoon for a braai with friends on their smallholding. Having arrived in the area a little early, we went for a quick drive up to an old haunt, Mrs 6000 had a quick vote (the queues near us being laughable, if not worse) and then we headed to our friends’ place, where we sank beers, ate meat and played cricket on a decidedly soft surface.
It was on the way there that we passed another smallholding, which houses the ‘Cape Wildflower Show’ (CLOSED UNTIL WINTER) – that smallholding was attratively named: Geenbuffelsmetgeenskootgeskietgeenfontein. 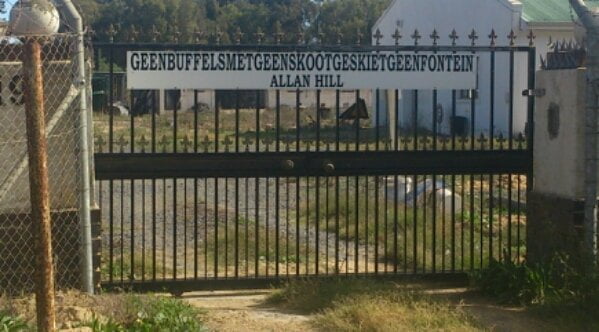 This is presumably (if not definitely) a play on… er… word of Tweebuffelsmeteenskootmorsdoodgeskietfontein – a farm in NorthWest Province, whose literal meaning is “Two Buffaloes Shot Dead With A Single Shot… Fountain”, presumably marking the site of some awesome feat of marksmanship… and a water source.
Farm Owner Allan Hill has evidently been less successful, the word ‘geen” which crops up thrice in his farm name, means “none”, thus “No Buffaloes Shot With No Shots And No Fountain”.
Disappointing stuff, although he does still have his VegTech Greenhouses, although he wouldn’t advise you to get one…

Anyway – his woes aside, we had a lovely time way up North and the kids saw dogs, sheep, horses, pigs, geese, chickens, cats and a puppy. Dad saw some Amstel and had to double check the car for stowaways and smuggled goods (especially the puppy) before we left.