But it’s not true (surprise, surprise). Sure a virus called Wuhan-400 does appear in Koontz’s book The Eyes of Darkness. 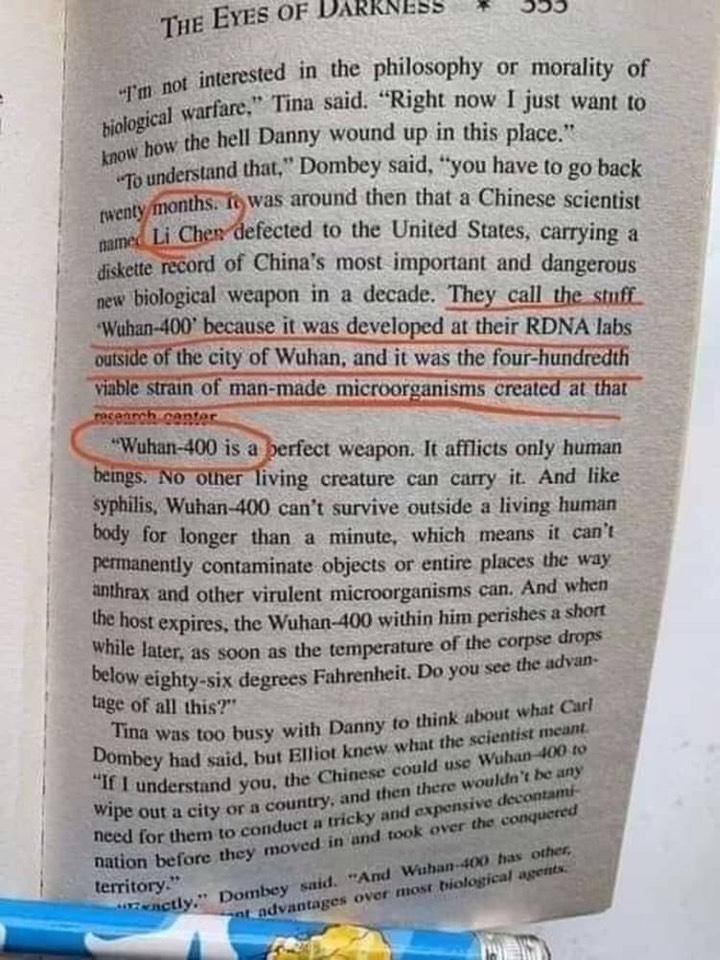 It was a man-made biowarfare product. So not like SARS-CoV-2, which is not man-made biowarfare product. (I don’t think it’s “the perfect weapon”, by the way: viruses with 100% mortality wipe their hosts out too quickly to be properly contagious, so you can’t get them to spread properly. That means more effort to get a decent number of victims. Who wants to put in that much effort when you’re already evading international law and slaying millions of innocent people?)

Wuhan-400 was developed in Wuhan and became known to the West when a Chinese scientist called Li Chen defected. And yes, Wuhan was where SARS-CoV-2 was first found, but actually, Wuhan-400 was originally called Gorki-400 and was developed in Russia. And it was Russian Scientist Ilya Poparapov who defected. Li Chen and Wuhan were only substituted in during a reprint in the 1990’s – presumably when Russia became less of a perceived threat thanks to glasnost and perestroika. See? 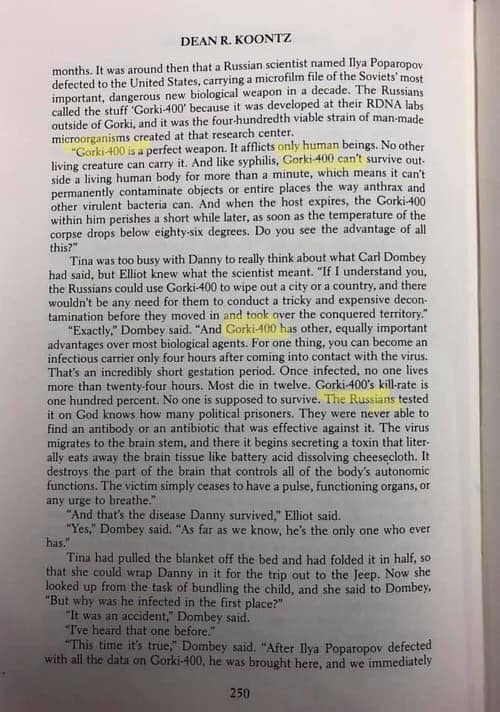 Otherwise though: spot on.

But what about the much shared second piece in the book:

“In about 2020, a severe pneumonia-like illness will spread throughout the globe, attacking the lungs and bronchial tubes…”

Well, that’s not in his book at all. It’s in a book by Sylvia Brown called The End Of Days. It’s worth noting that there are three claims in there: the date, the illness and the modus operandi of the disease. They’re all correct, although the last one is a little tautological, given that attacking the lungs is really all that pneumonia-like illnesses do. But psychic Silv was accurate with her other two predictions. And as Meatloaf once told us: two out of three ain’t bad. It’s also not a bad starting mortality rate for a man-made weaponised virus. But that’s another story. 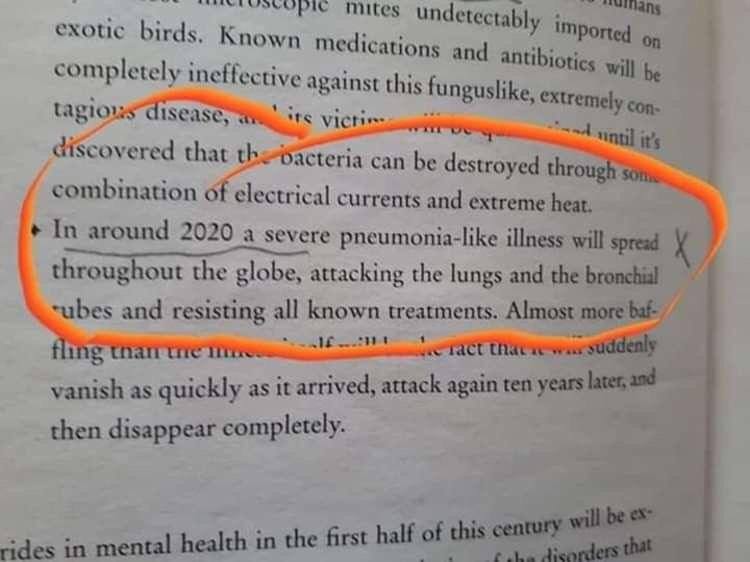 So yes, some of it was right. In the same way that – despite being a bit shit at darts – if I threw a million darts at a dartboard, I’d probably get a bullseye.

And if you want further proof that this was merely a lucky dart, you only need to check out the rest of the page that this metaphorical bullseye appears on, because it’s full of her 999,999 other misses: 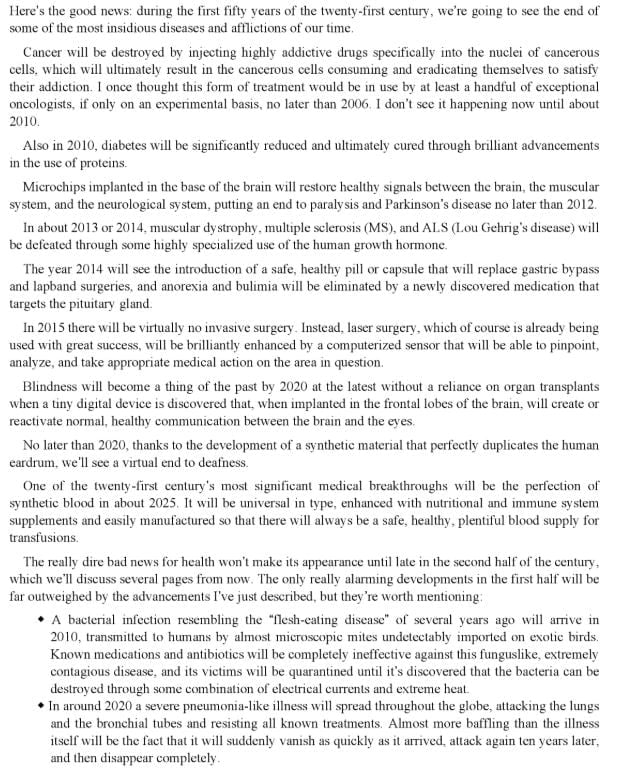 Sadly, here we are in 2020 and there’s still cancer and invasive surgery and deafness and blindness and anorexia and diabetes and Parkinson’s and Multiple Sclerosis and Muscular Dystrophy.

But still, let’s celebrate the fact that there was no outbreak of flesh-eating disease “transmitted to humans by almost microscopic mites almost undetectably imported on exotic birds”. Imported from where? Why didn’t the humans there get it first? It’s transmitted “by mites”,  but also it’s “funguslike” and yet we find we can destroy “the bacteria” through combinations of electrical currents and extreme heat. We already knew that those things can kill bacteria. Sadly, they also kill the people who are infected with the bacteria, which is why we can’t use them to cure disease.

Unless Sylvia is suggesting that we just stick all the patients into an electric chair and then a big fire.

Because if you were going to try to destroy the funguslike bacteria, that would work.

But I have digressed once again. This was never supposed to be a post about how crap psychics are: this was about how Dean Koontz didn’t predict SARS-CoV-2.

In summary, Koontz’s fictional virus was completely different to this real coronavirus, wasn’t even from Wuhan originally, and half the pages in the Facebook post doing the rounds weren’t written even by him.
And even then, only 1 of about 74 predictions on that other page was correct.

tl;dr (although you clearly already have): don’t believe stuff you read on Facebook.