After last week’s frightening tale from Melbourne, given to us under the somewhat confusing “Commonwealth Games” banner, Google Now has done it again, with this bizarre Commonwealth Games story, seemingly even further disconnected from the Games than the serial sex attacker mentioned above: 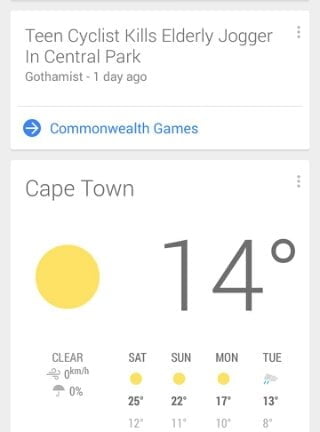 Here’s the tragic tale on this one – was it a terrible accident or was it down to another cyclist behaving like a twat – that’s up for the authorities to decide, but in the meantime, I think that we can all agree that it has sweet Fanny Adams to do with the Commonwealth Games.

Obviously, I’ll keep you updated of Google Now’s continuing efforts to inform me about the Commonwealth Games.

In unrelated news, how crap does Tuesday look? 🙁