I’ve got plenty of lab work to do today: this test isn’t going evaluate itself. Because of this, I had no plans to head to BAOBAB BEACH in Kenya’s Kilifi County.

But even if I had, I’d have cancelled them pronto having read this warning from the Director of the Kenya Wildlife Service (Kilifi County). A man with a signature so complicated, it took scientists three decades and one of those huge blackboards filled with equations just to figure out who he was.

But I digress, often.

The warning isn’t to be taken lightly, because… well… see for yourselves: 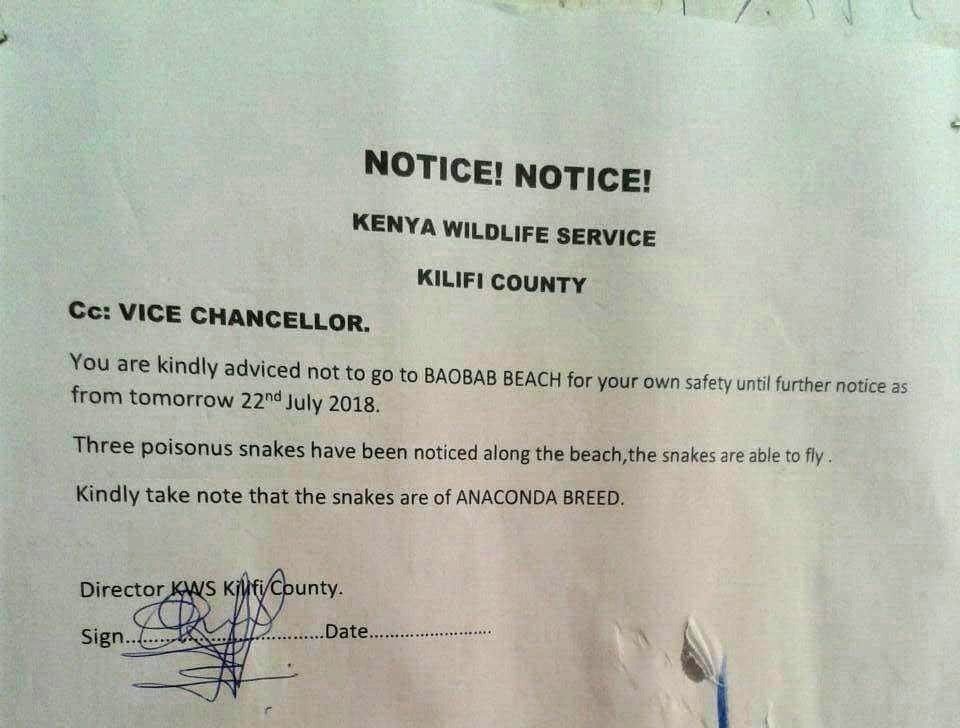 The first thing that I noticed (pun intended) was that readers are advised twice to NOTICE! That’s already hinting at some sort of serious message coming up, and Mr Wygfbf&ddsfgnk%#cbgsb#kh¥gv doesn’t disappoint as we continue to read.

Additionally, there are other signs indicating that this is a real warning – he’s even Cc’d VICE CHANCELLOR. We’re clearly not messing about here. No-one Cc’s VICE CHANCELLOR without good reason. You just don’t do that. It’s serious stuff.

However, whatever the issue, we’re OK for today as we are only adviced to stay away from tomorrow. Your last minute trip to BAOBAB BEACH is still on, so long as you’re reading this four days ago.

If you’re reading this after then, then you are adviced to avoid BAOBAB BEACH. Do not go there. Stay away.
I’m not sure how I can make this any clearer.

The reason, as you’ll no doubt have read by now, is that three poisonus snakes have been noticed (but note: not noticed! noticed!) on the beach. Now, I’m not going to mock the use of poisonus when what he actually means is venomus; firstly because that’s a common error, and secondly, because the sentence including this mistake goes on to tell us that the snakes can fly and that rather distracted me from his earlier mild misconception.

Because who cares if they are poisonus or venomus when they can fly?

I did a quick google search for flying snakes. Apparently, there is a film called Snakes On A Plane, but I couldn’t find any sort of details on the plot, so I’m not sure what it’s about.

There is a gliding snake, which can’t actually fly per se, but can (allegedly, at least) glide, hence the name “gliding snake”. They’re only found in South East Asia though, which is very much where Kenya isn’t, but then the ANACONDA BREED of snake is only found in South America, and that’s also somewhere where Kenya isn’t. The gliding snake flings itself off things and lands on lower things. I’d be more comfortable with calling it a “falling snake”, as gravity is quite heavily involved in the whole process, but apparently, the grace with which it utilises air resistance on its way down persuaded some bold colonial explorer to plump for some rather overly dramatic nomenclature.

Given the name of BAOBAB BEACH, I’d imagine that there may well be BAOBAB trees there, which is something for those falling snakes to use as a launch pad, and so I wouldn’t advice walking underneath any trees there.

In fact, I would advice you to not go there at all. From tomorrow until further notice.

Incidentally, there’s also a Flying Serpent, but only in Chinese Astrology (“Heavenly Snake, Chief of the Water Reptiles”, nogal), Cinematography (a film made in 1946) and Mythology (the Bible).

The Fiery Flying Serpent is to be avoided at all costs, but thankfully, none of those have been noticed on BAOBAB BEACH.

Oh, and or the record, the ANACONDA BREED of snake can’t fly or glide and is neither poisonus nor venomus. Apart from these three, obviously.

But let’s not allow that sort of factual detail get in the way of this heartfelt and serious warning.