We have returned to real life, work and 6am wake-up calls. The kids went back to school this morning (yes, I know everywhere else is off this week – don’t @ me), but I very much doubt that they’ll make it successfully through to second break without dozing off. It was 25 hours and 25 minutes from door to door. It would have been a bit quicker, but for the Cape Town flight being delayed by an individual being removed from the plane (no idea why) and their luggage being difficult to find.

And it would have been so much more pleasant at DXB if only we could have bent the rules a bit. Let me explain:

We had about 1 hour and 40 minutes from first plane landing to second one taking off – just security to get through in between. Tight, but manageable. I’ve done it before in under an hour, and in fact, as an example, this same process only took us about 25 minutes on the way out (albeit that we got lucky in that the arrival and departure gates were very close together).

Pretty exhausted after an overnight flight from the UK, we were rather annoyed when our A380 from Manchester didn’t go to the terminal, instead parking right down at the bottom end of the runway, well away from all the airport buildings and meaning that we had to bus to the terminal. Even just after dawn, the air in Dubai is sticky and in the mid-30s. You’d rather be inside.

So it was a bit irritating, but these things happen (though not very often with A380s, to be honest). And with 500+ passengers to unload, followed by a long journey across the airport, it meant that it took 50 minutes from touchdown to actually getting to the terminal. Crazy.
However, when we did get there, we were met at gate by an Emirates guy holding a very reassuring ‘CAPE TOWN EK770’ board to personally take us to our flight, so there were no worries about missing it from that moment forward.
A very rudimentary x-ray of our bags, then another 15 minutes through the terminal on foot to gate C43 – just about as far from where we’d parked up as you can be.
And then – guess what? Back on a bus to get to our 777. Another 20-something minute journey back to the aircraft parking lot.
And when we got there, while we queued to get up the steps, I took this quick and dirty phone pic… 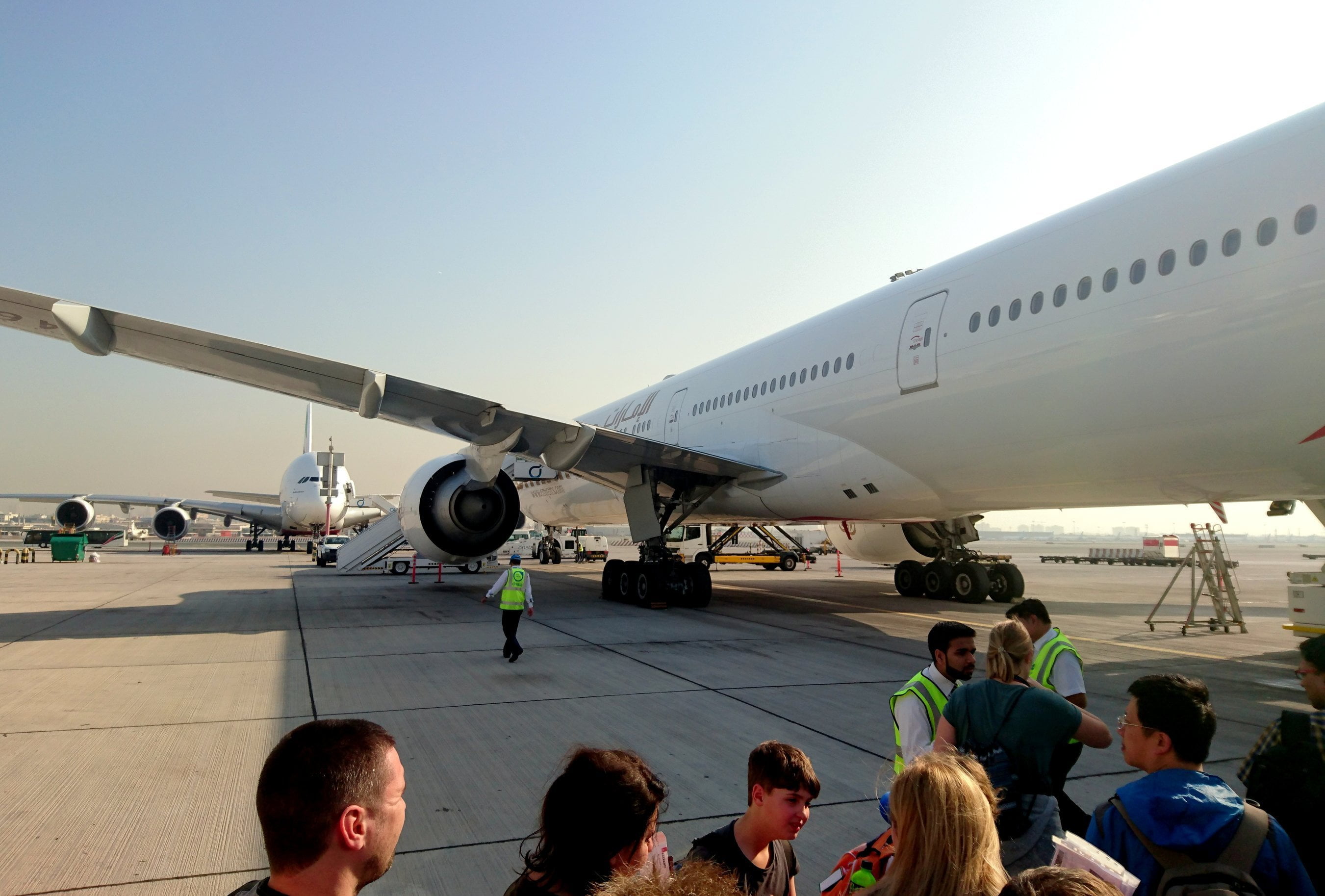 There, in the foreground, our 777 for the Cape Town flight. And in the background, all of about 100m away, the very same A380 that we disembarked from well over an hour earlier.