Not really, obviously. That would just be silly.

But an air of despondency and self-pity has settled over many of the more dramatic South Africans on the internet this morning. That’s because of this headline in today’s Sunday Times. 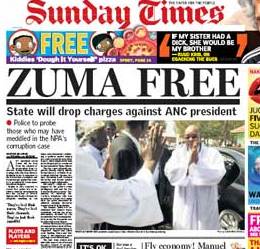 Unsurprisingly, I have a few remarks to make on this.
Firstly, that this has been coming for an awful long time. These people should really have got used to it by now. So quite where the shock and the outrage has come from, I’m not sure. Presumably, they’ve been living in a tent in the Karoo for the past 6 months. “Welcome back”, I guess.
Secondly, this is a report in the Sunday Times. Now, I know that it’s a bit of a pain, but I prefer to wait until the following week before passing comment on Sunday Times‘  stories. That’s just to give the editor time to print a retraction and an apology, together with the worthless assurance that it won’t happen again. Why weren’t they up in arms last week when iol.co.za reported: “Zuma Charges to be Dropped“?
Thirdly, the official NPA announcement (for what it’s worth) is due tomorrow at 10:30. If you want real pity, then Monday morning is always a good time to get it. Everyone’s in a bit of a sombre mood anyway and ready to join in a nice session of mutual commiseration.

It’s Monday and our President-in-waiting isn’t being charged with corruption. And it’s raining. And petrol went up last week. And the dog’s ill. And we lost the cricket. And Spar only had green bananas. And…

Finally, despite all these people wanting Zuma “to have his day in court”, they have already reached their verdict long ago. I mean, obviously, he’s guilty, isn’t he? Isn’t he? Why else would he be fighting at every possible stage to stop the case going to court? Proof of guilt, isn’t it?
Well, put yourself in JZ’s position for a moment. Let’s just suppose that you or I were charged with fraud or corruption or money-laundering or racketeering for a moment. Or even all four. And let’s say, just for the sake of this example, that you were innocent of those crimes. I don’t know about you, but I would be doing everything possible to get those charges against me dropped as soon as possible. I’d be taking every legal step I could. Wouldn’t you? Of course you would, particularly if you felt the system was primed to work against you.

With the NPA announcement tomorrow that they’re going to drop the charges (as we’re expecting), this matter could be finished. Nothing more to be said or done. Of course, unsatisfactory for some, yes. But you’re never going to please all of the people, all of the time. The justice system has not been raped, although many would like you to believe it has. But then, many of those people still believe that JZ is guilty of rape, despite his acquittal three years ago. So what is their word worth, anyway?

There was never going to be an easy way out of this mess. But if South Africa is ever going to move forward, there had to be some route taken. Much like petulant football players chasing the referee after a dodgy offside decision, moaning about it is futile. There will be no change of mind, no disallowed goal; you are merely prolonging the story for no real reason, save the detriment of the country – which helps no-one.

Time to move on, SA.