It’s true. TableMountain.net, the official site of er… Table Mountain, provided us with photographic evidence of the snow falling, and of two young gents enduring the weather in their shorts: 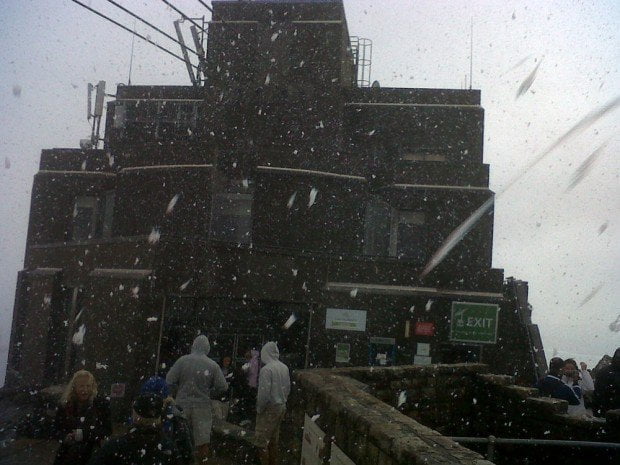 This was then followed shortly afterwards by taxijam.tv, whose crew were atop the flat rock for a pre-production meeting about the Vote for Table Mountain in the New 7 Wonders of Nature campaign. They promptly filmed this:

It’s all romantic and cold and wintery and lovely, isn’t it? Or maybe just cold and wet, depending on how you look at it.

Not quite on a par with the waist deep stuff I encountered on The Last Hurrah, but because it’s relatively unusual for Cape Town to see these sort of conditions and because Table Mountain is unique in its setting right next to a major metropolis. Thus social media networks have been full of retweets and wall posts of the pic above.
As someone who grew up with regular winter snowfalls, it’s rather amusing to see how excited people get about this short, sudden flurry, in much the same way as London grinds to a halt if more than an inch of the white stuff comes down.

Let’s hope the weather up there improves before my wife chucks herself off the top sometime in the near future (rope attached).