This week, I am mainly attending a course in the Cape Winelands and therefore will be pretty scarce for the next couple of days. Expect quota photos and not too much writing. I had a rather controversial post about the BNP in the UK lined up – not controversial because I want to be controversial, but because I was actually going to document the fact that I don’t agree with the general opinion on the events of this last week.

I actually thought that the “sad day for British democracy” was not when two members of the BNP were elected to the European parliament, but when eggs were thrown at a democratically elected MEP and he was assaulted and prevented from speaking in public by a violent mob. The former was actually the perfect example of democracy at work. The latter is inexcusable – whatever the views and policies of the individuals involved.
Sadly, the mainstream media don’t dare to voice that opinion for fear of alienating viewers and readers. I find that most of my readers are pretty much already alienated anyway, as this comment from Jo Hein indicates. Tinfoil hat required.

Anyway – I’d love to continue on that one, but because of my commitments elsewhere, comment approval and replies are going to be a little tardier than usual. Man at work. Please expect delays.

Cape Town has been stunningly beautiful this past few days, calm, warm and bathed in winter sunshine. Three years ago, we also had blue skies, but it was windier, as this Sea Point quota photo shows. 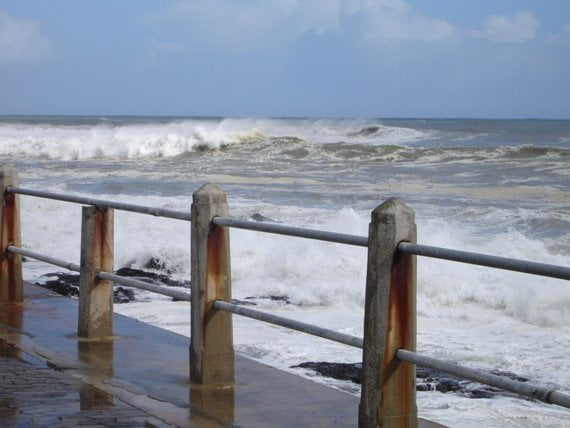 And of course , it’s exactly one year to the kick off of the World Cup in South Africa. But that’s up in Jo’burg and will be completely unaffected by the prevailing meteorological conditions in Cape Town.

3 thoughts on “Wrong way around”