Word has reached us here at Chez 6000 that there was much amusement after the Cape Town Tourism AGM and the launch of the new marketing campaign for the city last night, as delegates emerged from the meeting to find that the car of Whale Cottage supremo Chris von Ulmenstein had been wheel-clamped in the CTICC car park because it had been parked in a disabled parking bay.

I don’t think it would be unreasonable for me to suggest that Ms von Ulmenstein is one of the more unpopular online figures in this city. Some would say that she rarely has a good word to say about anyone, a view perhaps supported by reading her weekly Sweet and Sour service awards, the former of which is usually a single line, while the latter is generally several paragraphs of ranting and moaning. Indeed, many believe (and for “many believe”, many believe that perhaps you should read “everyone knows”) that she was singled out in Mandy de Waal’s scathing review of Cape Town food blogs earlier this year:

There is also a notorious blogger on the Cape scene who has been barred from some restaurants and thrown out of others and whose allegedly libellous crusade is said to have caused significant damage to the luxury leisure industry.

Nothing like biting the hand that feeds you, although quite how it still feeds her is a bit of a mystery to me. That’s because it would seem that Ms von Ulmenstein’s Whale Cottage business, renting out self-catering accommodation to tourists, is equally disliked.
After all, no-one has bothered to set up a website called Don’t Read 6000 Miles…, now have they? (have they?) Yet search for “Whale Cottage” on Google and you may come across this site, which alleges all sorts of nasty things about her properties. There’s even a video.
Of course, that could just be the work of a single mischievous guest who had a bad stay – these things do happen. But then when you look deeper, you find that her Franschhoek property is ranked 48th out of 49 in the area, based on 30 reviews. Hmm.

Anyway- all this immaterial and potentially subjective background is merely for my myriad of overseas readers.

The fact is that parking in a disabled space in a car park, when your only “disability” is being rather unpleasant is an entirely repulsive act. And it fully deserves this: 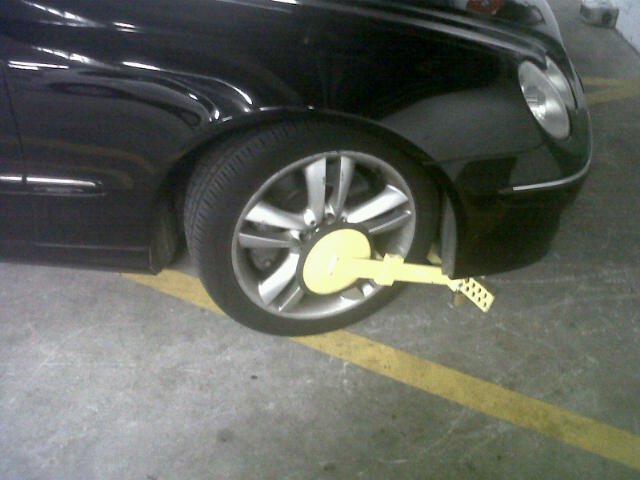 Probably the best thing to do in this situation would be to admit your guilt, laziness, stupidity and selfishness, pay the fine and drive away.
Not to have a pop at the car park attendants, as one eyewitness noted:

It took hours to get out because she verbally attacked the security staff who were doing their jobs:
“But you are not disabled lady. Why park in a disabled parking bay?”

Surprisingly, the Whale Cottage blog account of last night’s meeting – in which Ms von Ulmenstein is surprisingly critical of the new CTT strategy – fails to mention that any of this happened. It could so easily have gone unpublicised and that would have been a crying shame as I feel that we should name and shame those who illegally park in disabled parking bays; much like we should with those who throw litter or cigarette butts out of their car windows or those who fail to adequately restrain their children in the car when driving.

Not that Chris von Ulmenstein did any of these other things, of course.

No, Chris von Ulmenstein parked illegally in a disabled parking bay at the CTICC last night.

Thanks to all those who got in touch about this.

Please note that comment moderation has been temporarily re-enabled on the blog. Usual rules apply.