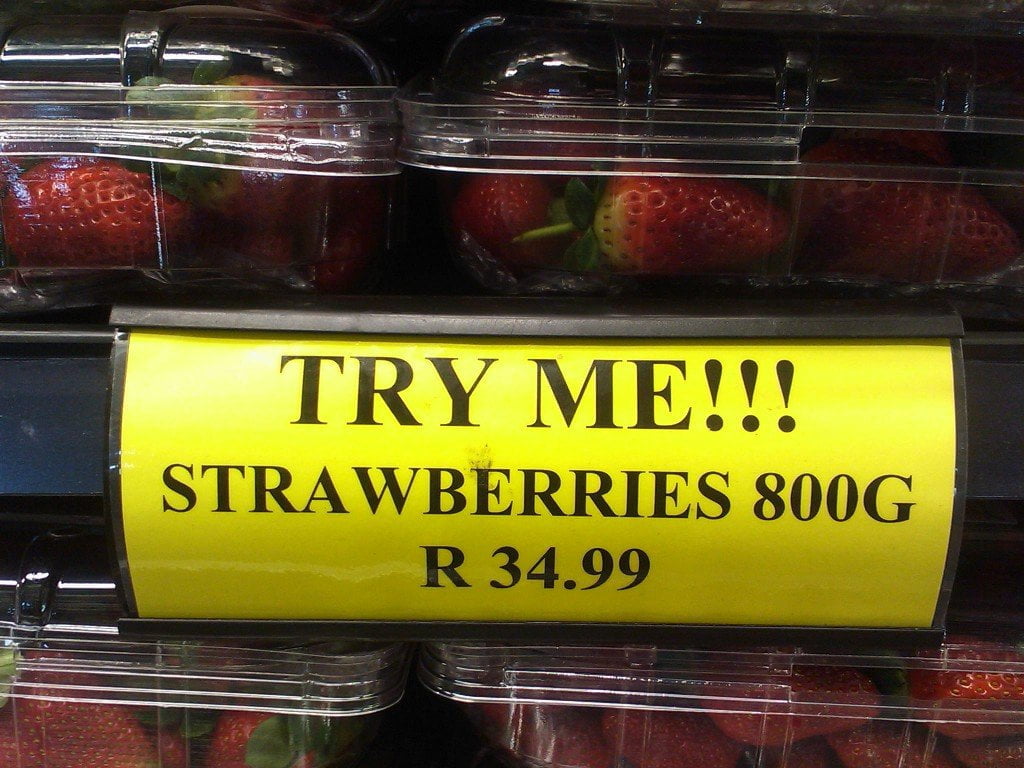 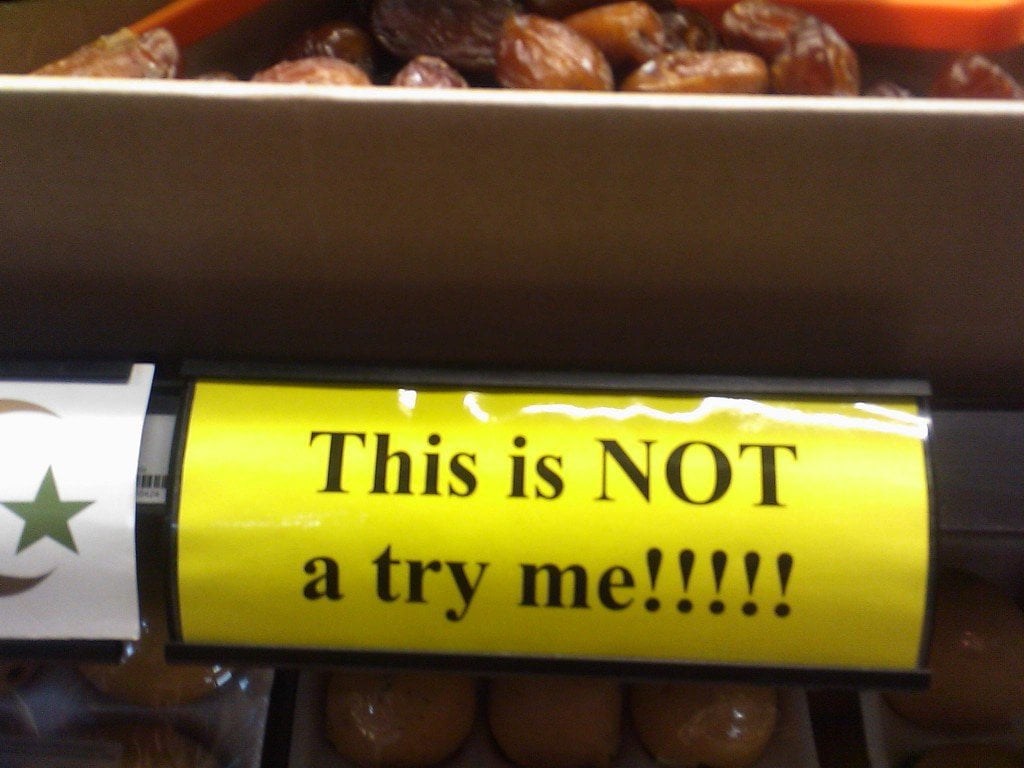 What Woolies appear to have done is to alter their policy on the TRY ME!!! freebies which they use to tempt you into purchasing their (usually very decent) fruit.
It used to be the case that they would lay out some of their wares openly with the invitation TRY ME!!!, at which point, one could delve into said wares and taste them whilst trying to forget that other people’s hands had been in there too.
But Woolies seem to have cottoned on to the fact that this was not very hygienic and have now boxed their TRY ME!!! offers – as you can see with the strawberries above.
But then the poorly-photographed dates on the left (the store manager was rapidly approaching as I took it) have me confused. As you can see, This is NOT a try me!!!!!, but is a try me!!!!! different to a TRY ME!!!? And if This is NOT a try me!!!!!, then why are the dates unpackaged and ready for TRYing, while the TRY ME!!! strawberries are all sealed in punnets?

Using my nifty footwork to sidestep the rapidly approaching – and seemingly irate  – manager and applying my scientific logic to the situation, I made some rudimentary calculations. And I worked out (by extrapolation of the data gathered thus far) that anything in Woolies which was in any sort of packaging was obviously a TRY ME!!! whereas anything which was open on the shelves is NOT a try me!!!!!.

I began to look around and was instantly greeted by a whole heap of freebie opportunities. Virtually everything was packaged and therefore available for sampling.
Since I was in the vicinity, I started with some fruit. The strawberries seemed appropriate and were very tasty. I then moved on to enjoy a messy (yet satisfying) breakfast snack of wholenut muesli and plain yoghurt (750g and 500ml respectively) while wandering around looking for chocolate and beer. I passed the homeware section, which (with hindsight) would have been a sensible place to unpack a bowl from the boxed 12-piece porcelain dinner set for my breakfast combo. R199 all in, unless you’re TRYing it in the shop, in which case, it’s free.

It was at this point I noticed that I had dribbled plain yoghurt down the front of my jeans in a rather embarrassing fashion. The worst of it was cleaned up using pre-packaged Woolies kitchen cloths (R19.95 for pack of 5) and the rest of it will come out in the wash this evening, thanks to the mugful (mug from the R15.95 porcelain range – brightly coloured, holds washing powder well, but it’s just a mug) of washing powder I chose to TRY!!! (1kg Skip Biological, R35).

I was contemplating which of the wide variety of toothpastes to test out with my recently unpackaged Oral B toothbrush when I was grabbed from behind by two burly checkout girls and a security guy and literally flung from the shop. I could have been quite badly hurt if it weren’t for the Nautilus scatter cushion (R160) I was holding at the time which thankfully broke my fall.

I can only imagine that the manager was not happy with me taking photographs in his shop. I guess I should have asked permission first. Maybe I’ll give him a little bit of time to calm down and then pop in later to apologise and sample some free dinner.