I hate it when people call football “soccer”, but even I won’t let that put me off the first official sporting event at the stunning Cape Town Stadium:

The Soccer Festival on Saturday January 23 2010. 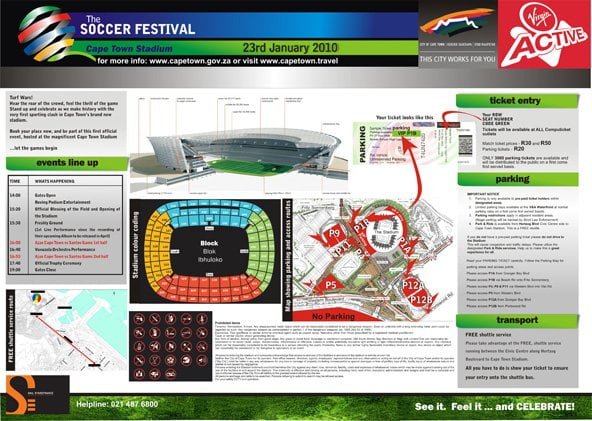 The attendance is limited to 20,000 for this match between two local sides Santos and Ajax Cape Town as part of the build-up to test the stadium readiness for the rather larger tasks which follow later this year.
A larger crowd will be allowed for the next warm up event:

The second Cape Town Stadium test event, planned for February 6, 2010, will launch the Cape Town Stadium Rugby Festival.  A Boland Invitational 15 side will play the Vodacom Stormers. The SA 10s Legends vs International 10s Legends promises to be an exciting curtain-raiser to the main match.

Who knows, maybe the Stormers will like it there so much that WPRU will abandon Newlands.
OK – I think we all know.

Tickets for the January 23rd event are available via Computicket while stocks last (obviously).
Event flyer.

EDIT: Just spoken to Jessica from Cape Town Tourism.
She’s just come out of a meeting with SAIL StadeFrance and they have said that CAMERAS WILL BE ALLOWED in the stadium on the 23rd.

She was at pains to say that the ban still remains on other items (firearms, ammunition, fireworks, pointy things, the old South  African flag etc.).
Which is nice.