The Advertising Standards Authority (ASA) in the UK has come under fire for banning an advertisement for Courage Beer which it has deemed “unacceptable”:

A beer advert that suggested a man needed a drink before gaining enough “Dutch courage” to tell a woman that a new dress made her bottom look big, is unacceptable, the advertising watchdog said on Wednesday.
The poster ad for Courage beers showed a nervous man sitting on a sofa next to a can of beer with a woman standing with her back to him wearing a figure-hugging dress with its sales label still attached. [link]

The Tall Accountant has his opinion on the whole affair:

See the link for the latest from the nanny state.
I am not quite sure what the ASA’s issue is given that the whole issue is rooted in fact.

I can see where he’s coming from, but of course, I disagree. 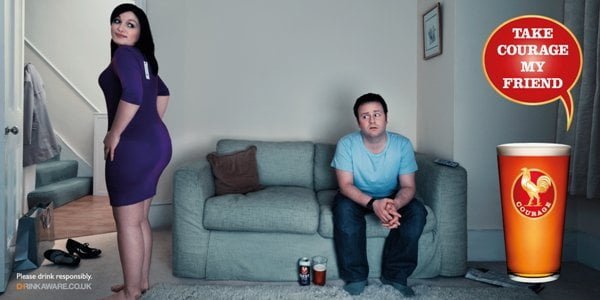 A can of bitter is not going to be enough to assist the young gentleman on the sofa in expressing his opinion vis a vis the size of his girlfriend’s arse clearly and concisely to her. Believing that would be folly and would put him – and countless other blokes across the UK who regularly find themselves in the same difficult situation and think that a quick beer will save them – in great danger: No – you’re going to need at least a couple of four-packs for that.

Drinking heavily before taking on the mission of answering the “does my bum look big in this?” question helps by allowing you to describe the potential problem(s) with the new outfit in detail, and also goes some way towards dulling the immediate pain caused by being struck with the iron, her shoe or your beer glass. It also has the added advantage of also relaxing your body so that your fall to the floor is less likely to do you permanent harm.
Of course, in a best case scenario, you would get so drunk that your other half actually looked attractive despite her massive arse being squeezed into a dress two sizes too small.

Of course, the ASA is unable to cite these genuine dangers as their reason for pulling the ad, because women just wouldn’t understand. This would lead to troubling debate during the ad break on Coronation Street regarding the ASA decision which in turn might lead to that horrible question about the new dress she bought last weekend at Meadowhell. Danger, Will Robinson!!
Better then to say that it might be construed as “offensive” and leave it at that.

Anyway, once again, the ASA decision to ban the advert has led to it becoming a global news story. The Wells & Youngs Brewing Company – who brew Courage Ales – must be gutted.

19 thoughts on “Take courage, my friend”