The South African news has been full of one thing today, and it’s not a nice thing. It’s not something I want to blog about either, and so I was about to wander elsewhere on the internet, disappointed that our local rags had provided naught on the blog fodder front when suddenly  – and brace yourselves here – this:

Not even the horrific kerning on the News24 website could take the shine off a headline like that.
(Although it clearly tried.)

Now, before we go any further, let’s just run through those fourteen words one more time, shall we?

Alleged victim of this alleged harassment comes in the form of Martie Wessels, a published Christian poet who sums up her book thus:

“But will everything really work out? None of us can rightly know, because we are just grass seeds in the wind, and we float wherever the wind takes us.”

Anyway, the harassment came about by her being (presumably accidentally?) added to a pornographic Whatsapp group. Now, I am the member of many Whatapp groups, but there’s none of that kind of stuff going on on there. The most racy it gets is perhaps a joke about [redacted] having a small penis. It’s tiny, apparently. But I digress. There’s certainly nothing that would make me go on a witch hunt and publish the names of the other participants in the conversation on Facebook, even if Martie’s assertion is partly true for the Molton Brown boys:

“Everyone involved is surely possessed by some or other devil, because the pictures exposing your bodies indicate to me that you are sick in your brains.”

I’d also never go that far if I knew – as Martie apparently does – that the instigator of the groups was:

“a woman described as ‘mentally challenged’, who is a rabbit farmer and who lives in a caravan in the Pretoria area.”

That’s the sort of person you want to stay on the right side of. Not someone you want to piss off. One night, there’s a knock at your door and the next thing, they’re finding your ribcage – stripped of all flesh, and covered in gnaw marks – in a hutch in Gauteng.

Also, just how easy must this woman be to identify? We’ve got her location, her abode, her employment and her mental state. Oh, and her photo, because:

On Wessels’ Facebook page, a composite picture of this woman, surrounded by several rabbits, can be seen.

Wessels said she was told by one person that the purpose of the groups was to “raise funds” for the rabbit farmer.
“But to raise funds in this way is ridiculous,” she said.

Look, we all know that rabbit farming isn’t easy. And the uncertainty about expropriation without compensation is a spectre lurking behind every agricultural business at the moment.

But why did they pick Martie to add to their depraved online messaging community? Look, I’ve kept this bit of information to myself until now, but Martie lives in the Northern Cape. In a town called:

How do you think Marties hometown got its name?

But still, I’m with Martie here: exactly how do you raise funds for a mentally challenged rabbit farmer by sending naughty photos to a WhatsApp group? I’ve sold images (no, not those kind of images) on Adobe Stock, and let me tell you, what I’ve earned would barely buy a bag of carrots from PicknPay.

Maybe I’ve been doing it wrong.

So what happens now? Well, since Martie has gone public with this amazing tale, the threats have thankfully evaporated. But that wouldn’t be a fitting end to this sort of bizarre story.

No, what you need to have to finish things off is just a hint of continuing weirdness. Cue the last line from the News24 article:

Wessels made a statement at the Warrenton police station, which was confirmed by a Captain Moleko, who would not provide his first name to News24.

I am sure that you are looking forward to the follow-up article on News24 as much as I am.

It’s too hot to blog today. Somewhere around 40 of your South African Celciusses.
I can’t even think, let alone document any of those thoughts which I’m not having.

Thanksfully, once again, someone else is doing it for me. Today, it’s WTF, Evolution?, 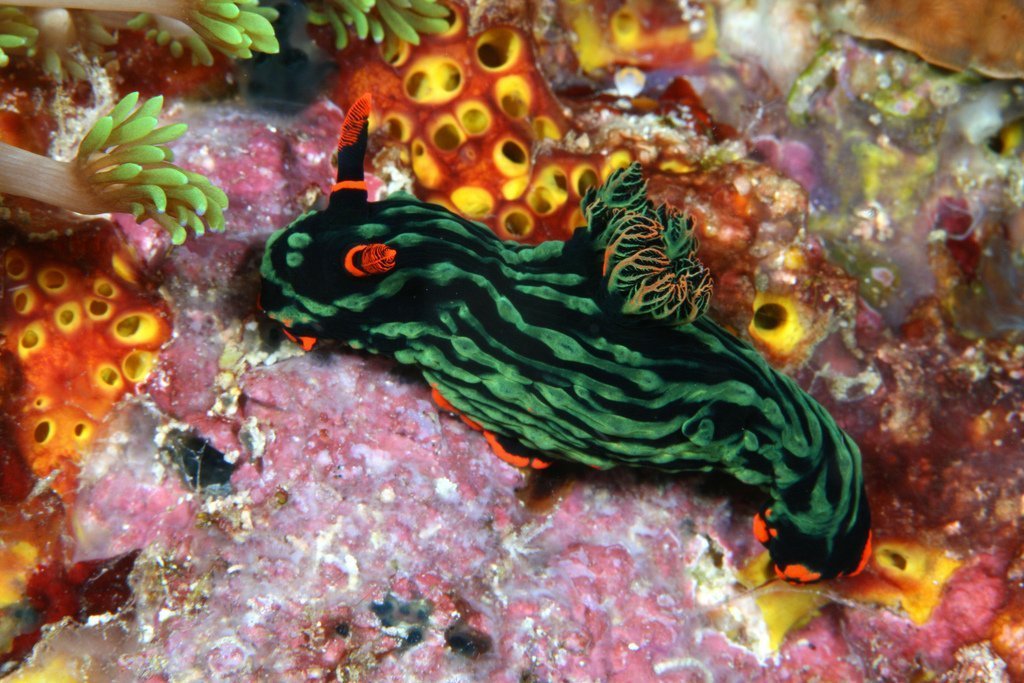 And the wonderful commentary that goes with it:

“I feel awful. I think I partied a little too hard last night. I have got to stop doing that.”

“I think I may have made some animals last night.”

“Then why do I have ‘variable neon slug’ written on my hand? Oh god, what does that even mean?”

That, as you will no doubt be well aware, is a wonderful example of Nembrotha kubaryana.