Not the temperature last night in Cape Town (although it wasn’t far off).

Six degrees of separation is the idea that all people on average are six, or fewer, social connections away from each other. As a result, a chain of “friend of a friend” statements can be made to connect any two people in a maximum of six steps.

And, building upon that, this:

Of course, you don’t have to use the example(s) above. You can try anything. I checked out Adolf Hitler to Donald Trump (further than you might think), and Sheffield United to László Bíró (every bit as far as you might think).

And while it’s working out just how many connections there are there between the two things you want to check out, it gives you slices of Wikipedia trivia to keep you entertained. e.g. “798,944 (12.8%) Wikipedia pages have a title that doesn’t contain a space”. Pub quiz-tastic stuff.

There’s no real point to this except to waste a bit of time, but then that’s pretty much the same as life, right?

Cash used to be king, then thanks to Bill Gates, content was king for a while, but we’re now in the information age and information is now king having deposed the other two in a bloodless coup.

And I, for one, welcome our new factual overlord.

Further evidence of this monarchical shift is the daily stats on 6000 miles…, your favourite go to blog for all things… well… for all things. We can like to do eclectic.

Here’s a prime example – which were the pages that people looked at most on here yesterday? 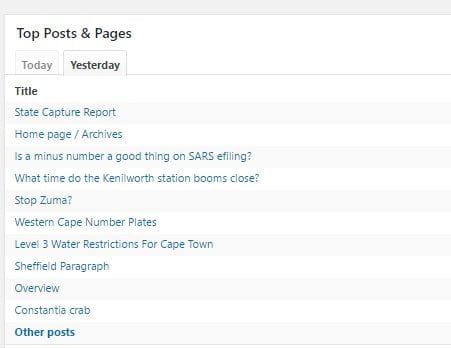 The big news in SA yesterday was the State Capture Report. Everyone wanted to read the 355 pages for themselves, seeking possible confirmation that our President had been acting improperly, unethically, in a corrupt manner, and generally taking the country for a ride for the benefit of himself and a few of his cronies. (Confirmation was duly provided.)
The website of the office of the Public Protector was overloaded, so I helped out by uploading a PDF of the report on here. And lots of people viewed that post. I would count this is an information post.

In second place yesterday was people accessing the front page of the blog. Simply typing “www.6000.co.za” into their URL bar and looking at what was on offer there. It’s loads. Loads.

Third place goes to the SARS minus number post. Also helpful information. SARS is our taxation service, and once you’ve submitted your tax return, they drop you an email with a number in the OWED TO YOU box at the bottom. Often this number has a minus sign in front of it. But who owes whom in that case? People are confused and thus that post, which explains all, is regularly up in the daily top 3.

Fourth, more reference material. For the morning and evening rush hours, the barriers at Kenilworth station in Cape Town remain closed for a prolonged period of time. But what are those times? I posted them, and people regularly click through to find out.

Fifth “Stop Zuma“, probably related to the State Capture thing and this tweet, bizarrely suggesting that the DA’s election campaign from 7½ years ago could now be considered a raging success (if you conveniently ignore its repeated failures and the unfolding national disaster in the intervening period). (And the fact that Zuma has actually not been stopped.) (But otherwise, sure.)

More informative posts at sixth and seventh. Helpfully sharing which towns the two or three letter codes on Western Cape numberplates belong to. And those all-important Level 3 Water Restrictions for drought-stricken Cape Town.

The remainder of the Top 10 is filled with yesterday’s post in which I was tacitly described as being “very obviously common” and “probably something perfectly frightful like a Primitive Methodist”, Tuesday’s sharing of those wondrous aerial photographs, and -perhaps somewhat unexpectedly – images of a land crab from September 2010.
Nice, but uninformative.

My point stands though, in that while far less than half of the posts on here are “reference” or “information” posts, those posts still fill a disproportionate number of slots on my daily most popular post rankings.

Maybe I should go full reference? After all, that’s what Wikipedia did and I believe that they are ever so popular.

Except that popularity isn’t why 6000 miles… exists. And it’s a good job too, to be honest. So I think that I’ll just keep sharing the good stuff, passing comment on silly people, venting my spleen on occasion – and making that all important information available where necessary, in an effort to make your day just a little bit better.

Don’t like it? Feel free to demand a full refund.

Commitments in places that aren’t Cape Town mean that I’m not around to blog today. But never fear: I saw this situation arising some time ago and I have pre-prepared a pre-prepared post for you.

(Before you get too excited and thankful, it’s not very good)

Since I’m travelling today, I thought we might do something geographical, so herewith the wikipedia page of the Extreme Points of Earth.

It tells you interesting things like where Point Nemo (so called because people are always trying to find it) (possibly, anyway):

The Pacific pole of inaccessibility (also called Point Nemo), the point in the ocean farthest from any land, lies in the South Pacific Ocean at 48°52.6?S 123°23.6?W, which is approximately 2,688 km (1,670 mi) from the nearest land (equidistant from Ducie Island in the Pitcairn Islands to the north, Maher Island off Siple Island near Marie Byrd Land, Antarctica, to the south and Motu Nui off Rapa Nui in the north east).

I’m not going anywhere near Point Nemo. Unless things all go a bit MH370.

The most remote airport in the world from another airport is Mataveri International Airport (IPC) on Easter Island, which has a single runway for military and public use. It is located 2,603 km (1,617 mi) from Totegegie Airport (GMR; very few flights) in the Gambier Islands, French Polynesia and 3,759 km (2,336 mi) from Santiago, Chile (SCL; a fairly large airport).

I’m not going anywhere near there either.

All in all, it’s pubquiztastic stuff though. So get learning, because I’ll be organising a test just as soon as I am back.

We’ve all got to go at some point, and that’s my justification for sharing this wikipedia page entitled:

In there, you’ll find a man who dropped a screwdriver into some plutonium (oops), a man who stabbed a war elephant (yes, there’s such a thing) in the belly and died when it fell – dead – on top of him and and ancient Greek lawmaker, who was smothered to death by gifts of cloaks showered upon him by appreciative citizens at a theatre.

I particularly like the possible explanation for this one, from 336 AD:

He may have been poisoned.

While there’s no specific evidence of poisoning, I think we can safely assume that there was something amiss to cause this incident. It’s not the sort of thing that happens on a regular basis around any of the town squares I have visited.

LOL. Don’t even ask, but I was browsing this page on Wikipedia when I spotted that their usual request for assistance in compiling more data had been slightly (and sensibly) altered, thus:

In one way, I love the humour in this. In another, part of me wonders if someone at Wikipedia thought that they might actually have to put that disclaimer in, just in case.