No. Not you, Anton. This Anton:

Over the past few weeks, I’ve had a lot of emails from readers struggling to work out exactly what might happen regarding the drought situation during the upcoming summer, and I’ll be absolutely honest here, I’ve fobbed them off with answers that most politicians would be proud of. I’ve meandered around the subject, filibustered relentlessly, and fed them current statistics which actually have no bearing whatsoever on the medium-term status of our water supply here in the Western Cape.

But that’s because I’m just a humble blogger. I don’t have the massive resources of Provincial Government backing me up. I can’t call upon supercomputers, meteorologists, hydrologists and Mystic Myrtle from Accounts to give me expert advice and information on how things are likely to progress from this moment onwards.

Anton has all of this (and, I suspect, more) right at his fingertips, and wow… doesn’t it just show…

Because here’s what he said yesterday:

I mean… who knew?

I had several possible scenarios for the summer planned out on the giant Western Cape water crisis whiteboard which dominates our bedroom, but I have to say that each and every one of them suggested that things were bound to improve on the drought front – at least until the next rainfall season. I certainly couldn’t have predicted that things would – and here I borrow the erstwhile MEC’s exact words – “in all likelihood” “get worse”.

And looking now, I still stand by my previous thoughts, too, because actually, without the assistance of experts, who ever could have come up with this sort of prediction: that 6 or more months of hot, dry weather locally could possibly make a drought worse (in all likelihood, at least)?

Of course, now I will have to get my (waterless) eraser out and revisit my mental machinations on the most probable consequences of the dry season on the Western Cape water crisis.

I sincerely hope that I haven’t predicted the outcome of the next rainfall season incorrectly as well. Right now, I can’t see it having any positive effect. How will water, falling from the sky make any difference to our dam levels? It clearly won’t, and it’s laughable to think otherwise.

Although, thinking again, maybe we should wait for the experts to confirm that.

After all, insight like this is exactly why we pay them the big, big bucks.

I’ll give you the details tomorrow. Don’t miss out.

Here’s a comprehensive guide as to where in the Western Cape those two and three letter C codes belong. Why not print it out and take it along on your next (Western Cape) road trip to amuse the kids, the wife, or the (intelligent and literate) beagle? It’s also useful as a tool to work out where hitch-hikers want to end up. 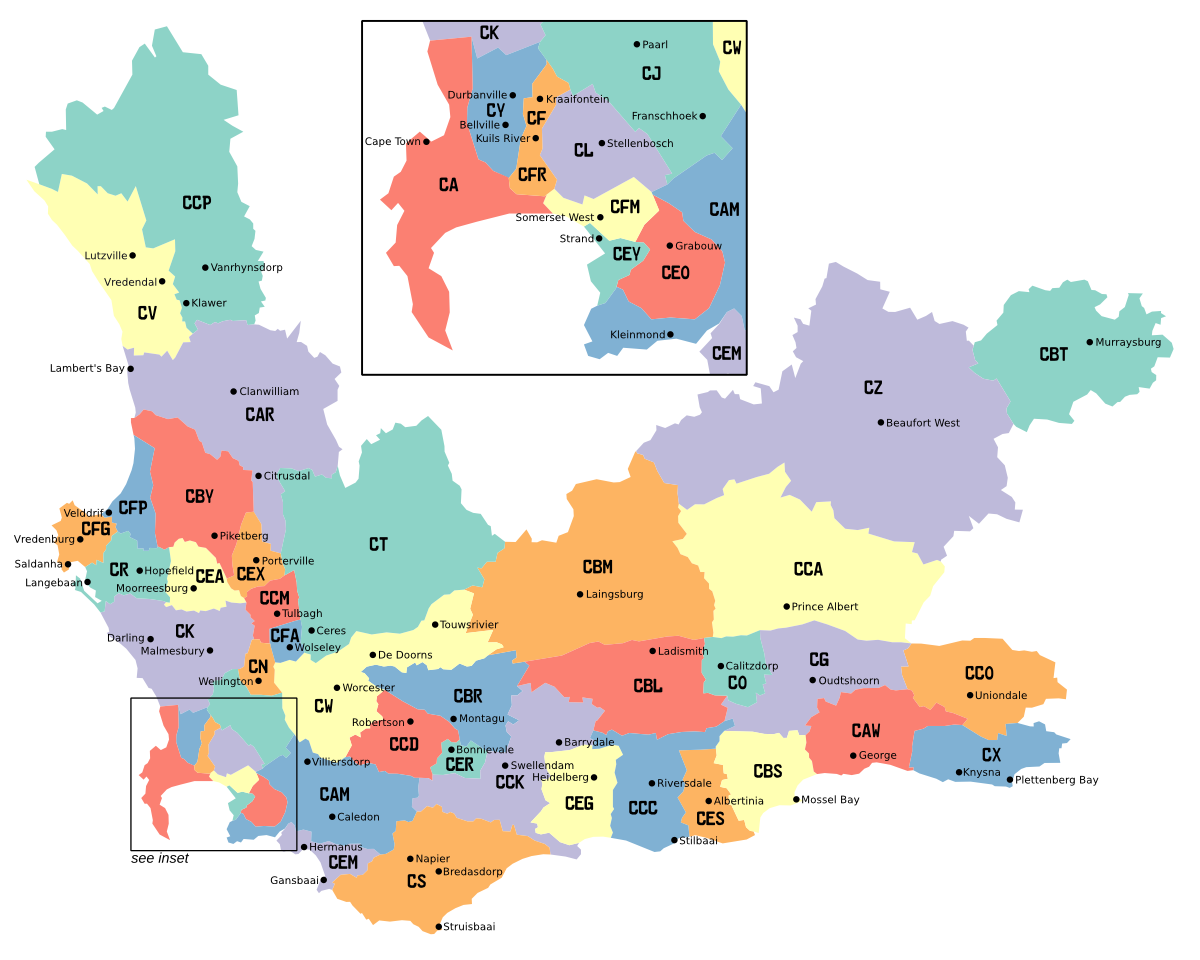 From this map, you can see how the curse of generally poor and overly aggressive driving has leached from CY into CF. CF is a particularly thin area, and thus it seems likely that CL will soon be affected. They’re already mostly drunk on the heady mix of fine wine and Afrikaans in Stellies, and I fear that the curse of the CY may be altogether too much for the roads to handle.

As I write, the results from yesterday’s national and provincial elections are beginning to come through. “It’s early days”, as every TV and radio commentator has been repeatedly telling us, but at the present time, it’s all “as you were”, with the ANC comfortably holding the country and Gauteng, and the DA strengthening its position in the Western Cape.
No surprises with those first two, but frankly, I’m left utterly bewildered by the ANC’s disappointing showing locally. Not because their record on service delivery elsewhere is particularly good (it’s not) or because the stats show that the DA isn’t doing a relatively good job of running the Western Cape (they are), but because the DA never released anything quite like this ANC election ad:

Suddenly, it’s no wonder he ignored all logic and reason when casting his vote yesterday:

“I can safely say now, we will, in this election, be trashing the Democratic Alliance in the rural communities… we will push up our vote in the black communities, and you’re going to have a big split vote in the coloured community… with that, we will definitely take the Western Cape this time around.”

Marius, much like you are now, (assuming you made it through the entire thing unscathed) (which is unlikely), is completely flabbergasted that the ANC hasn’t swept to power in the Cape solely on the back of this astonishing musical performance. Indeed, the issue seems to be only that the ANC didn’t get enough people to see this video ahead of voting day. Because surely if they had done, we’d all be voting ANC. Even if we weren’t actually allowed to vote. Even if there wasn’t an election.
Yep, I’ve seen that video and now I want to go and vote ANC in the Western Cape, all day, every day. For year after confusing year, I’ve been wondering why I was here; why any of us are here. What is the purpose of life?

Well, having seen that video, now I know: it’s to vote ANC in the Western Cape.
Resistance is futile. Especially once you hear that cheeky little Orkees nod to Afrikaner culture at 3:11.

Helen Zille’s plans for DA rule in 2019 will now simply have become a pipe dream. Once this goes viral (which it surely will after being featured here), it’s Game Over for the DA. And for everyone else, too. EFF off. ACDP hee hee.
In fact, if this four and quarter minute euphonious extravaganza gets viewed beyond the borders of South Africa, I’d not be surprised to see the ANC achieving world domination within the next few weeks. It really is that good.

Vote ANC in the Western Cape!
Because if you don’t, they’re going to give us more kak like this next time…

The new cycling laws come into force in the Western Cape today, and the biggie is that, as a driver, you must allow at least 1 metre between the side of your vehicle and any cyclist or you will be a criminal. I’m not sure that this will make cyclists feel any safer, given that people generally completely disregard any other traffic laws with impunity anyway.

I’ve done a handy PDF version of the new regulations for you.

Quite what happened to the mantra of “Cyclists stay alive at 1.5”, I’m not sure. Presumably, around 33% more cyclists will not be making it safely back from their ride now. Obviously, this is sad.

What is quite interesting is that there are some rules for cyclists included in the new regulations as well. Obviously, the cyclists are up in arms about this (the discussion on the new laws is taking place in the “Rant & Rave” section of the local cyclists forum), because they’ve been reminded of all the rules that they should have been obeying anyway.
Have you got a front and rear reflector on your bike? Didn’t think so.
In addition, predictably, the laws for motorists apparently don’t go far enough and the laws for cyclists are too strict, ill-thought out or just annoying. Sample quote:

I will no [sic] be complying with the provisions of this law which I feel do nothing to improve my safety.

Of course you won’t, because we can all pick and choose which laws we want to comply with, can’t we? Idiot.

No. Don’t be so silly, because what these new regulations do is reiterate the rules which both drivers and cyclists must abide by, reminding road users that everyone needs to be responsible for their own safety and the safety of others, and that can only be a good thing in the efforts to prevent unnecessary road deaths.

With that in mind, obviously, if a driver breaks the law, by, say, going withing 95cm of a cyclist, then you can report them by taking down their car registration number and informing the authorities.
Equally, when you see the lycra-clad peloton of cylists going through the red traffic lights at Kalk Bay six abreast on Sunday, you can… erm… you can… right. You can’t.