Life with Colin has opened our eyes up to some of the sideroads off the R316 and R319.
Previously, these were places we sped past on the way to or from the cottage. Now we have to stop to allow the hound to urinate, and during that necessary process, I’ll take a photo of the surrounding countryside.
We’ve already visited roads to places like Oskop and Houtkloof. Today, we did the Jongensklip junction and while Colin squatted, I pointed (tastefully in the other direction) and shot. 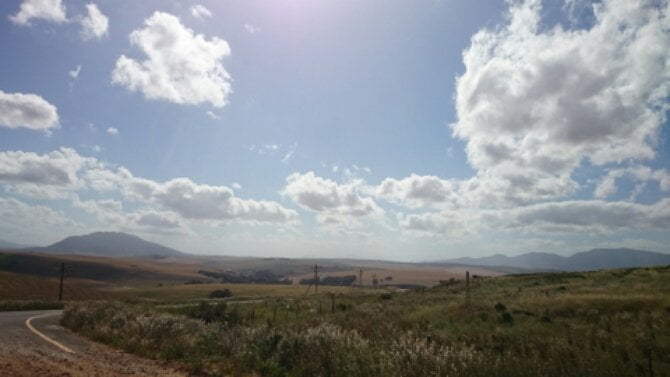 There’s a Flickr “Dog Wee Stop Landscapes” group in there somewhere, but I’ll save both you and them from post jellyfish-eating vomit stop at Freesia and Main in Struisbaai yesterday afternoon.

After a monumental journey home from Agulhas which included a reluctant car, some fish & chips, a MASSIVE traffic jam over the mountains, a highway blocked by protesters and loads of other stuff which my mind has already blocked out, I do at least have this: 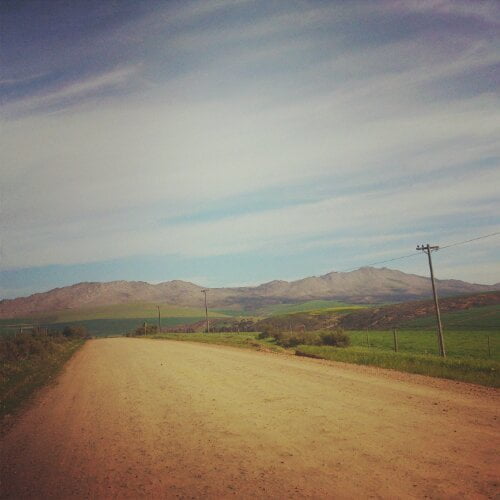 This was the view somewhere just off the R316 between Napier and Caledon, where we made a “comfort stop” for the kids. I won’t share the view the other way.

The rest of the journey was really not worth sharing either. There’s five and a half hours of my life I won’t get back.

And so, once again, I turn to beer for comfort and relief. And it’s working.

Today’s bit of gardening advice comes from Peter Shardlow of Kirstenhof, courtesy of his letter to the October issue of Popular Mechanics magazine.

Hey, it’s Nature
While the topic is being prioritised, let me add my contribution to the “Go green” campaign. If you have a bougainvillea that is struggling or not flowering, don’t waste time with fancy fertilisers: simply urinate on it. (Evidence suggests that this ability comes naturally to men.) You will see results in no time and you’ll also save water.

Sometimes, when analysing these sorts of letters, it’s kind of difficult to know where to begin.
This is one of those times.

So let’s turn to the science of all this.  The high nitrogen content of human urine does indeed make it a good candidate for a fertiliser. Add to that the fact that it also contains traces of phosphorus and potassium and it’s like Black Label for plants. Game on. But there’s nothing new or revolutionary about this. However, since Peter’s letter suggests that he has seen measurably improved results in his urine-treated bougainvillea, I’m sincerely hoping that he’s done this right.

What Peter needs is a control subject. If you’re not familiar with scientific parlance, what that means is that he needs something to compare his urine-soaked bougainvillea with: preferably another bougainvillea which hasn’t been weed upon. Ideally, these two bougainvilleas (bougainvilleae?) should be close enough to each other to experience the same atmospheric, meteorological and all other conditions, while their individual watering schemes should not affect the other. Only then can you accurately compare the two in a scientifically correct manner.

But why stop with wee?

Was Peter’s agile mind not piqued by the opportunities afforded to him by other bodily excretions? The one that jumps out at me (fortunately only in metaphorical terms) is faeces. We stick manure all over our gardens in order to prompt growth, so this almost seems like a no-brainer. Of course, human faeces can contain some really nasty bugs that you really don’t want lying around in your back yard, but this is science and we want flowers on our bougainvilleas (bougainvilleae?).

And while we’re on a roll, what about vomit? Won’t work, you say?
How do you know until you’ve tried?

Ideally, Peter should also be “blinded” (not literally, although some of the thorns on those bastards can do you real damage) – so maybe Mrs Shardlow (if such a creatures exists) (and somehow, I’m struggling to picture that right now) should deliver the goodies to the plants so that Peter won’t be swayed into subconsciously skewing his results in favour of supporting his hypothesis.

I can almost picture Peter’s back garden now – a plot of bougainvilleas (bougainvilleae?) each 2 metres from its neighbour, each receiving a different sort of human-based excretion for its nutrition; Peter enthusiastically leaping in and out of the rows of plants with a tape measure and a notebook.

And while we’re on about him documenting his results, what’s this “in no time at all” nonsense?
Are you, Peter, perhaps suggesting here that as soon as you pee on a bush, it blooms?
As you do it? For real?
Do you, Peter, perhaps imagine that you have “magic wee”?
I can envisage an absolutely spectacular stage show here. A line of dull bougainvilleas (bougainvilleae?) in front of an expectant audience. On comes Peter Shardlow, to rapturous applause. Having acknowledged the audience, Peter turns his back [perhaps a drum roll at this point?], unzips his fly and urinates into each of the pots in turn, causing a riot of colour to burst forth.
The crowd (understandably) goes wild.
Peter, I have to ask, do you also poo rainbows? Because that would make a great finale.

Look, what I’ve described above (before briefly branching out into contemporary performance art) is the rudimentary framework for an experimental protocol.
I’m assuming that’s pretty much what Peter did before writing in to PM. It’s what I would have done, had I the time or inclination to wee on my plants. Something which I can, of course, being male, do. In further evidence that there may not be a Mrs Shardlow and that Peter may have to advertise for an assistant for his ongoing work, our protagonist seems unaware that women urinate too.

They do, Peter. They do. Annoyingly regularly: especially when you’re on a road trip or when they’re pregnant. Ladies have to wee, otherwise they would explode – kidneys and bladder first – and that would be extremely unfortunate. Unless, of course, you could somehow contain the explosion (like in a really big tupperware or something) and then see if the leftovers made your garden flower better.
And in saying this I’m not advising or advocating that you explode women, Peter. That’s not a good thing to do.
Exploding women is naughty.

Finally, while I appreciate your efforts in attempting to save water, I feel that must remind you of some basic physics: “Matter cannot be created, nor destroyed”. Now, I’m aware that there are certain discussions around challenges to this theory at the present time, but special relativity etc etc not withstanding, I’m pretty sure it still holds true for wee. That is, unless you’re weeing at the speed of light (and if you are, you should really include that in your stage show). What I’m saying is that what comes out must, at some point, have gone in. You have to drink the water to make the wee. You are not saving water; you are merely utilising it in a different way.

Sadly, at the end of all this, I have to admit that I do have rather sorry-looking bougainvillea in my back garden and I was tempted to waste time with fancy fertilisers. Now, however, I will be adopting the Shardlow Principle and if my wife objects, I shall explode her.