One of the most hauntingly beautiful, yet hauntingly sobering wedding songs ever. And yes, sadly this is the best version I could find with a video.

Here’s the “real” (album) version, if you don’t need moving pictures. (Which I feel you actually do for blogging purposes.)

I heard this on an electronic dance radio show (I know, you do the maths) I was listening to in the lab, and I found that it was a welcome break from the beepy noises, which was actually something of a surprise, because I thought that I was quite enjoying the beepy noises.

I never really understood the title of that film. But then, I don’t do films. But seriously, a 7 looks nothing like a V. Was the sequel to be called ei8ht? Because that doesn’t work either. Unless you drop the 8 below the line to make it look more like a g. WordPress doesn’t let me do that though.
Anyway, it’s se7en because it is my – and by a surprising coincidence, also my wife’s – seventh wedding anniversary today.
Seven years allows you to buy gifts of copper, wool and “desk sets”. I played safe and avoided the “desk set” option, thus increasing the chance of there being an ei8th anniversary around this time next year.
We celebrated by walking through some water to a cave (yes, seriously) and drinking some bubbly in front of a obstinately unflaming fire. This is not a metaphor for our marriage: the wood was just a bit damp.
(Stop sniggering at the back.)
And so, with the wind howling around the cottage, and the internet struggling for grip, I’ll head off to a cosy bed with a cosy wife and think of the amazing last sev… se7en years.
Happy anniversary, dear.

Late nights, disturbed sleep, early mornings. It all adds up and suddenly I realise again that I’m not getting any younger. 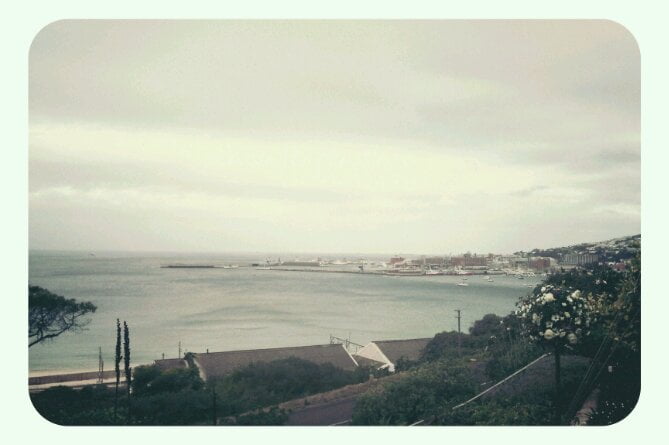 We spent the afternoon at a wedding overlooking Simonstown, a few miles down the coast from Kalk Bay where we partied until late last night.
False Bay is beautiful, but I don’t want to go back there until I’ve properly recovered.

We’re off to a wedding this afternoon. Attending weddings is becoming a more unusual pastime as most of our friends have already tied the knot already. In fact, I’ve had to have a scroll through Flickr to try and work out when the last one was.

It turns out that it was nearly two years ago at Morgansvlei near Tulbagh. The weather that day was superb and it looks like today’s events in Noordhoek will be equally sunny. It should be a great evening.

Incidentally, Mrs 6000 and I are not so far from our own 5 year anniversary. I mentioned this to a friend and he said that in that case, we were also not that far from the 7 year itch and we should watch out. I assured him that neither my wife nor I suffer from any chronic skin conditions and that he must be mistaken.

Anyway, I’m sure it’s nothing that a anti-histamine and a hefty dose of penicillin can’t sort out, right?

On the day that reality TV “star” Jade Goody married her boyfriend, who was (actually – checking the time) is being allowed to have the night off from his curfew as part of his sentence for assaulting a teenager with a golf club*, I’m left wondering what has gone wrong with the world.

Sky News has had the wedding as their top story for the past three days and even previously sensible newspaper’s columns have fallen over themselves fawning over Goody’s behaviour since she found out that she is dying of cancer.

The wedding is being conducted in the shadow of a funeral. The funeral is forthcoming, and it will be the bride’s. That fact feels crass and cruel to state outright, so accustomed are we to the comforting fictions that habitually weave themselves around terminal cancer.
It is a bitter reflection on reality that it has taken the very worst of times to make us glimpse the best in Jade Goody, but she finally has our respect now.

Not mine, I’m afraid. I haven’t followed this story from the beginning – I’m happy to admit that. But as Jade Goody’s biggest (pay)day draws to a close, I can’t help but think that there has been precious little actually said about how such a fate could be prevented. Not her wedding – although that might not be such a bad idea – I mean her imminent demise from cervical cancer.

Apparently, looking around the internet, her plight has “raised awareness of the disease amongst young women”. Good. But where – as the newspapers, magazines, international television crews et al. for some reason gathered in Hertfordshire or Essex (the Independent gets very confused) for the wedding of a dying racist and a violent criminal – was the message that cervical cancer can be prevented.

That message could have been plastered all over every TV screen in Essex (and beyond), be on every front page tomorrow and on every coffee table in Essex (again) by the end of the week. Instead, we get tightly closed hotel gates and the obnoxious Max Clifford. I think I count that as a missed opportunity.